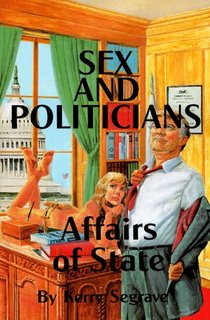 G. Gordon Liddy, you have some new Watergate competition. Just when you think the ReTHUGs have hit a new low comes news that the FBI is investigating whether former Rep. Randall "Duke" Cunningham (R-CA), who plead guilty last Fall to taking $2.4 million in bribes in exchange for doling out defense contracts, may have been plied with prostitutes in D.C.'s Watergate hotel as part of the corruption scandal involving two contractors. The FBI is also investigating whether other members of Congress and their staffs may have also accepted the services of hookers, as well as hotel rooms, limousines, cash and other freebies, reported The Wall Street Journal. Cunningham was sentenced to eight years and four months.

The two contractors in the bribery case are ADCS, Inc. owner Brent Wilkes and MZM, Inc. president Mitchell Wade. Wilkes is at the center of this new revelation of prostitution and politicians. He's known to have run a multi-bedroom hospitality suite, first in Washington's infamous Watergate Hotel and then in the Westin Grand near Capitol Hill. Named in government documents as "co-conspirator No. 1," Wilkes gave Cunningham more than $630,000 in cash and favors in order to receive millions of dollars in federal defense contracts.

The Watergate Hotel is forever etched in the public memory as the site of the May 28, 1972 break-in at the headquarters of the Democratic National Committee, which ultimately lead to the resignation of President Richard Nixon. Let's hope the mounting White House and GOP scandals lead Bush down a similar path soon.
Posted by The Ostroy Report at 11:03 AM

Hmmm...should put the term "Deep Throat" back in its original context!

Maybe if Bush & Cheney would get some hookers it would help there outlook.

Why do we not know if the people who bribed the Dukester have been indicted for bribery?

The Watergate Hotel is forever etched in the public memory...

as well as causing every political scandal or pseudo-scandal to be suffixed by "gate."

The State Dept. keeps daughters of famous families available for "discreet" sex with visiting foreign dignitaries at the Watergate and nearby Columbia Plaza apartments. A military attache whistleblower got demoted for truth telling. This started under Reagan. My ex-boyfriend ran into Neil Bush at Bangkok's White House "disco" CHILD BROTHEL in the 1990s. I couldn't get authorities to do anything about either perp. Rebecca Hagel of the Heritage Foundation even defended Neil! Regarding the Pukester, it is especially egregious that while his "pro-life" votes annually MURDER 600,000 Third World women in childbirth, he makes taxpayers pay for his Viagra and condoms for screwing everyone but his wife! He has a zero rating from NARAL--he voted against all family planning and all abortion rights for all women in all circumstances while he adulterously diddled hookers who were probably underage and possibly the same sex. By his own standards, he was contracepting and aborting love children! I'll bet he was low enough to use his wife's childbirth injuries as excuse to cheat. He should be Bobbitted.-- Heil Mary

Where is All I Can Stands? Hasn't been on for awhile...

This, gas prices, Dubai, DeLay, Rove and Fitzgerald, Cheney got a Gun, Condi getting protested, Rumsfeld needing the boot, bye-bye Card and McCellan, Cunningham, oh and Burns,etc getting huge payoffs from big oil, Frist under investigation, Rush gets arrested, the great dicisioner maker looking stupider by the second, oh, I could go on and on...

November can't get here fast enough and to all those GOPers who say Dems don't have a plan...fix your own mess, losers!