Why Al Gore WIll Run For President 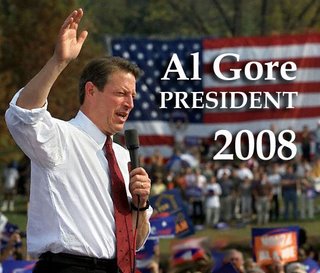 Is there any sane Democrat out there who believes, at this juncture, that there’s a more electible candidate for president in 2008 than Al Gore? That there’s an individual with a more impressive political dossier than The Goracle? Gore himself recognizes his potential. He knows this is the best opportunity he’s had in his 30-year career to send a moving truck to the White House. An even better chance than after eight years as Bill Clinton’s vice president, when he was a much younger, more arrogant and less passionate nominee. This is not 2000. Al Gore is a changed man. And the country is a much different place. And that’s exactly why he will soon announce that he’s going to run.

With Evan Bayh, Russ Feingold and Mark Warner out of the running, that leaves Tom Vilsack, Wes Clark, Bill Richardson, Joe Biden and the front runners, Barack Obama, John Edwards and Hillary Clinton. Obama is running on hype and charisma, not substance. When all the hoopla ends, and the honeymoon is over, what will surface is a Congressman with just two years experience and not much else. Don’t get me wrong. The guy’s a dynamo; lots of charm, sincerity and promise. But he needs about 6-8 more years before he’ll be taken seriously at election time. John Edwards, who just announced, will never win the nomination. He's simply not presidential. He’s a smart, well-intentioned guy, but so am I. And I can assure you that I won’t be living in the White House either. That leaves Hillary. I won’t get into the whole ‘she’s not electible’ thing. It’s much too complicated. And that’s precisely why Gore makes the most sense.

Al Gore’s a Vietnam vet who served four terms in the U.S. House of Representatives, two terms in the Senate, and eight years as vice president. And he’s brilliant. A guy who truly understands myriad domestic and foreign policy issues. A global warming guru. It’s laughable to even put him in the same category as Edwards and Obama, and even Clinton. And let’s not forget that he won the popular vote in 2000, and as some say, the electoral college as well.

It’s no coincidence that Gore’s been everywhere these past couple of years. He’s a smart, calculating pol, and you better bet your ass he smells opportunity. When he announces, he’ll have tremendous political and financial currency and support from which to build a successful campaign. He’s already been quietly assembling a seasoned team to help him, tapping people like Roy Neel who was a key aide in his 2000 presidential bid.

Gore is the right man at the right time. There’s 3000 dead US soldiers in a war that’s become a Middle East catastrophe, with no end in sight. Americans have finally realized that the economy is a bit more important to them than gay marriage. And if the East Coast’s Summer-like November and December is any proof, global warming is a real threat and not some crunchy liberal’s fantasy problem.

Al Gore. 2008 presidential candidate. It’s a matter of when, not if. Take it to the bank.


On another subject......we could use your help at The Adrienne Shelly Foundation, a non-profit organization dedicated in my wife's honor to help carry out her spirit and passion, with the goal of providing film school scholarships and grants to women filmmakers. As many of you know, Adrienne was brutally killed here in NYC on November 1st. Please visit our website to learn more about our mission and to make a donation. Every little contribution helps preserve Adrienne's legacy, and to help create something positive out of this horrible tragedy. Thank you.
Posted by The Ostroy Report at 7:32 PM 34 comments: 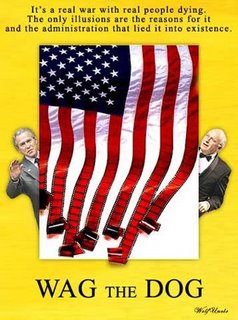 It's taken me almost two months to write again. What's inspired me is a subject I've written about often in the past: the Iraq War, and how it's been responsible for the senseless death of tens of thousands of Americans and Iraqis. Unfortunately, as many of you know, I know a lot about senseless death. And nothing ignites my passion more these days than seeing so many young men and women dying for an unjust cause. It's time for the carnage to stop. It's time that President Bush puts an end to this violent, out-of-control debacle. The worst military blunder in the history of our great nation.

Almost 3000 U.S. soldiers have been killed since the war began in March 2003, just about the same amount of people who died in the very tragedy--the 9/11 attacks--that was, at least in part, the rationale for going to war in the first place. But as we all now painfully know, with tragic consequences, there was no connection between Saddam and Osama bin Laden and al Qaeda, and the mushroom-cloud inducing WMD never existed. In short, this war was and is a fraud, perpetrated by a bunch of selfish, ego-maniacal, fear-mongering liars. But while their sons and daughters rest safely at home in the States, it is other people's children who keep dying a senseless death.

The Iraq war, unless ended as soon as possible with our troops coming home, is well on its way to becoming another Vietnam. But instead of withdrawing our troops, Bush wants to send more. And to keep fueling this military fiasco there's even talk of reinstating the draft in order to meet the many challenges our armed services now face throughout the world.

Winning the House and Senate was monumental for Democrats. But they must now do what's right, and somehow force the president's hand and help bring our troops home before America experiences even more senseless death.

On a related subject, we have created a non-profit organization, The Adrienne Shelly Foundation, dedicated in my wife's honor to help carry out her spirit and passion, with the goal of providing film school scholarships and grants to women filmmakers. Please visit our website to learn more about our mission and to make a donation. Every little contribution helps preserve Adrienne's legacy, and to help create something positive out of this horrible tragedy. Thank you.
Posted by The Ostroy Report at 5:23 PM 22 comments: