Earlier this year I wrote a piece titled "Forget Christie: Why Jeb Bush Will Win the 2016 GOP Nomination." Looks like he's made it semi-official with the announcement over the weekend that he will "actively explore" a presidential run, and will release approximately 250,000 emails early next year from his two terms as Florida governor from 1999-2006. As Yogi Berra famously said, It's deja vu all over again...

Despite the fact that he's not been to Iowa in two years, and that his political team consists of just four people, Bush has big Republican donors salivating on the sidelines. Folks who can't bear the thought of supporting bombastic New Jersey Gov. Chris Christie, whose BridgeGate and Hurricane Sandy scandals, coupled with his anger management problem and obesity, vastly diminish his overall appeal outside the Garden State.

Bush is the anti-Christie.  He's got pedigree, class, is soft-spoken yet firm, smart, moderate (by today's wacko Tea Party standards) and married to a Mexican woman, making him quite an attractive candidate to many, as Hispanics are becoming a much bigger percentage of overall voters. And, mostly because of what he's not--a fringe loon like Ted Cruz, Rick Perry, Scott Walker, Rand Paul or Marco Rubio, or a 'loser' like Mitt Romney--big GOP donors and bundlers would euphorically hop aboard the BushTrain the nanosecond he declares.

But Bush also has serious liabilities that concern the party's ultra conservatives, such as his controversial positions on immigration, education and taxes, as well as his overseas investments. And then there's that pedigree thing. Though his mother Barbara has essentially flipped on her famous 2013 claim that "we've had enough Bushes," the million-dollar question remains, 'is the country ready for yet another Bush?'

In an NBC/Wall Street Journal poll earlier this year, 69% of Americans agreed with Ms. Bush that it's time to move on. And with the news full of terrorist beheadings by ISIS; the turmoil in Iraq and Syria and elsewhere in the Middle East; new reports of CIA torture tactics; Dick Cheney reprising his Darth Vadar routine; and a still-struggling economy, will the ghost of big brother George haunt baby bro and present insurmountable challenges to an eventual campaign?

To be sure, Bush is no centrist, despite his lofty reputation. He's for tax cuts to the wealthy, is against abortion and gay marriage, is in bed with gun owners (we can partially thank him for Florida's Stand Your Ground law), and his views on faith have put him squarely in the middle of controversy. In 2003 he intervened on the side of the family of Terri Schiavo, a Florida woman in a persistent vegetative state, whose feeding tube was removed and then ordered reinserted, against the wishes of her husband, her legal guardian.

All of which makes Hillary Clinton the most likely victor in this dynastic match-up. The country has matured and evolved, but the Republican Party hasn't. It is Clinton's views, not Bush's, that are shared by a majority of Americans. Voters want immigration reform; have overwhelmingly supported same-sex marriage; believe in a woman's right to choose; worry about climate change; want to close the income gap; seek government regulation of Wall Street and the banking industry; and support Obamacare and the need to insure all Americans.

Yes, America's next president will likely come from American political royalty, but she won't be a Bush.
Posted by The Ostroy Report at 10:25 PM 4 comments:


With the release of the Senate Intelligence Committee's report on the CIA's detention and interrogation programs, which cites brutal acts of torture on detainees between 2001-2006, Chuck Todd, host of NBC's "Meet the Press," sat down this past Sunday with former vice president Dick Cheney.  Below is the original version of that interview before Cheney's people threatened Todd with a very cold, wet death if he didn't destroy it and re-interview him. Thankfully, Kim Jong-un's hackers were able to locate the original and make it public:

TODD: Mr. Vice President, this report is utterly shocking in its findings. The level of torture qualifies as criminal; a blatant violation of the Geneva Conventions as well as our own moral standards here in America.

CHENEY: Well, it all depends on how you define torture.

CHENEY: Get to the torture part...

TODD: And you would do all these things again?

CHENEY: You bet your liberal ass I would! And just for shits and giggles, Chuckie. They don't call me Dr. Evil for nothing.

TODD: So you don't think any of this is torture.

CHENEY: Torture to me is having to listen to Nancy Pelosi and Harry Reid. You can waterboard my ass all day long...just please don't make me listen to those two.

TODD: Let me ask you about a few specific cases. Let's start with Abu Zubaydah, who was waterboarded so aggressively, leading led to convulsions and vomiting....and in one instance he became completely unresponsive with bubbles rising through his open full mouth.

TODD: But Mr. Vice President, Zubaydah was also shot while he was held captive....and developed an infection in his left eye, which had to be removed.

CHENEY: He's got two eyes, for Pete's sake. What does he want...everything?

TODD: What about the near-drowning of Khalid Sheikh Mohammed, who was waterboarded at least 183 times?

CHENEY: That's not torture. In my house that's a shower.

TODD: Mr. Cheney, this next allegation is even more disturbing. It involves...er...um...rectal feeding or rectal hydration, without any documented medical need. Seems like it was used as a form of behavior control.

CHENEY: Damn right it was. I think we got that idea from that Al Pacino movie, "CRUISING."

CHENEY: (looks at Todd glaringly, with sounds coming from his mouth as if he's chewing on marbles) Do you see me laughing?

TODD: Some detainees were forced to walk around naked and shackled, hands above their heads. Dragged all over the place, being beaten. What is your response to that?

CHENEY: Um...that would be the Pacino film again.

TODD: C'mon, Mr. Cheney, one detainee, Gul Rahman, was found naked from the waist down, chained to the floor of his unheated cell, frozen to death. That, quite frankly, is unconscionable.

CHENEY: He didn't pay his utility bill. So we turned off the heat. We're not running an SRO at Gitmo!

TODD: Mr. Cheney, I'm really starting to get upset with your arrogance, colossal inhumanity and chilling disconnect from reality.

CHENEY: Chuck, one more comment like that and I'll chain you to the floor naked, club you with a spiked paddle and pour ice water all over you while blasting Ariana Grande.

TODD: Now that, Mr. Vice President, is indisputable torture. You can't deny that.

CHENEY: You're right, Chuck. No one should have to listen to Ariana Grande.
Posted by The Ostroy Report at 9:59 PM No comments:

Some Hillary Advice for Christie 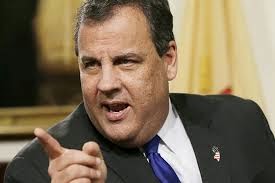 So New Jersey Gov. Chris Christie has weighed in on Hilary Clinton's electability. That's like the Knicks telling the Warriors that they have little chance of winning this year's NBA championship.

With the holidays approaching, I'd like to offer Christie this little gift of advice: you should spend your time contemplating your own depressed political stock, and chances (zero) of winning the Republican nomination for president in 2016, and not worry so much about Hillary Clinton, who has the support of 65% of Democratic primary voters.

The New York Times on Sunday reported that Christie recently told a group of energy executives that Clinton "lacks her husband's talents and personal appeal." I'm not sure what alternate universe Christie resides in, but Hillary Clinton is perhaps the only politician on this planet who is more popular than Bill Clinton.

Christie also claims he's more likeable than Hillary. While I'm sure he's a huge hit among nasty, arrogant, dismissive, disrespectful Northeastern conservatives who love being told "shut up" and "you're an idiot" by their elected officials, I have serious doubts that his big, bad Jersey blowhard routine will play well in the rest of the nation.

BridgeGate. Temper. Obesity. Just a few of The Boss's outsized liabilities to go along with his outsized personality. And when (not if) both Mitt Romney and Jeb Bush toss their hats into the ring, Republicans from California through the Midwest to the Rust Belt, Great Plains and down into deep South will be a singing a chorus of "Christie who?"
Posted by The Ostroy Report at 7:46 AM No comments:

The GOP's "The Party of Working People?" Who Knew!

Louisiana Congressman Bill Cassidy defeated Sen. Mary Landrieu in last Saturday's runoff election, handing the Republican Party their eighth pick-up and a 54-seat majority when the new Senate convenes in January. The victory broadens the already massive shift in that region's politics: the deep South is now as red as a fire engine, with nary a Democratic Senator or Governor across nine states spanning the Carolinas to Texas.

In his victory speech, Cassidy proudly made clear his constituency:

“We are a working-family region,” Cassidy said. “The Republican Party is the party of the working people.”

The problem with this declaration is that it is 100% patently false. Unless of course he's referring to another GOP, not the one that's vehemently against raising the minimum wage, or providing healthcare coverage for all Americans, or regulating Wall Street and banks, or seeking to dismantle the Department of Education or the Environmental Protection Agency, or cutting off funding to Planned Parenthood, or fighting immigration reform, or protecting the interests of Corporate America. Shall I go on?

As for Cassidy himself, let's take a peek inside his own Congressional record in terms of his support for the little guy:

Hardly the record of an advocate of the poor and middle class. But Cassidy and his party are certainly crafty enough to convince an appreciable segment of their base that words matter way more than actions.  Haven't poor and middle class white, rural conservatives been duped and disappointed by the GOP in the past? Apparently they have short memories, and voting against one's own economic interests still rules the day.

To be sure, right-wingers love to attack liberals for being in bed with Hollywood and the entertainment industry. But the GOP claiming to be "the party of the working people" is as big an example of fiction and fantasy as anything coming out of Los Angeles.

After the New Year, it'll be the first time in eight years that the Republican Party has controlled both houses of Congress. American's working people will soon find out how much Cassidy and the GOP will value and protect their interests.
Posted by The Ostroy Report at 8:19 AM 2 comments: