Love Bloomberg or Hate Him, But He and Trump are NOT the Same

Once again, just as they angrily fought over Bernie Sanders and Hillary Clinton in 2016, Democrats are engaging in a bitter battle over their preferred candidates.

And once again, while the #VoteBlueNoMatterWho mantra sweeps through liberal circles and social media, many Sanders supporters vow not to vote for anyone but Bernie. There are those who even more specifically equate Michael Bloomberg with Donald Trump, and promise to sit out the election if he’s the nominee.

To be sure, Bloomberg has lots of baggage. His skeletons include sexual harassment allegations against his company and him personally; his controversial, racially-incendiary “stop and frisk” policy while mayor of New York City; his refusal, like Trump, to release his tax returns; his insensitive remarks towards minorities, women and LGBTQ; and his comments about “redlining.”

But to equate Bloomberg with Trump is naive, ignorant and disingenuous at best, and downright dishonest at worst. And it’s suicidal. Because the future of American democracy is at stake in November.

How anyone can say they’re ‘the same’ is unfathomable.

To those democrats who say “I won’t vote for this democrat or that democrat”, or, “I won’t vote for anyone but my candidate”, let me make this simple: you can stand on principle…you can ‘send a message’…you can point out candidates’ imperfections and how they don’t agree with your positions 100%. That’s your right.

It’s time to instead focus on the big picture, because it’s pretty ugly. If Trump is reelected he will finally achieve his dream of turning America into a dictatorship and will destroy every single thing that matters to democrats/progressives. Which is why any democrat would be 1-million times better.

As adults we’re faced with difficult choices all the time. So we prioritize. We choose the better option, even if it’s not a perfect one. We accept that life is rarely an ‘all or nothing’ landscape.
And as children we’re told not to “cut off our nose to spite our face.”

Democrats need to understand that. And they need to hold those noses and vote for whoever runs against Trump…because the alternative is fucking terrifying…
Posted by The Ostroy Report at 11:03 AM No comments: 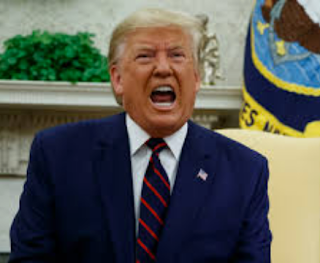 A week ago I wrote that Donald Trump’s consciousness-of-guilt will haunt him forever regardless of the outcome of the Senate impeachment trial.

One week later the Republican-controlled Senate not surprisingly voted to acquit Trump. Only one Senator, Mitt Romney, broke tightly-held party ranks and voted to convict…but not before delivering a powerfully poignant, courageous and scathing indictment of the president’s actions:

“…The grave question the Constitution tasked senators to answer is whether the president committed an act so extreme and egregious that it rises to the level of a high crime and misdemeanor. Yes, he did.”

It didn’t take long for Trump’s crippling insecurities (and obsessive Obama jealousy) to fire back. Just after midnight he tweeted…

“Had failed presidential candidate @MittRomney devoted the same energy and anger to defeating a faltering Barack Obama as he sanctimoniously does to me, he could have won the election. Read the Transcripts!”


And this morning, attending the annual National Prayer Breakfast in Washington, DC, Trump bitterly attacked the impeachment process and his opponents…including Romney and House Speaker Nancy Pelosi, who he claimed ‘used their faith to justify doing what’s wrong.’
Just as I wrote last week, no matter Trump’s claims that the Mueller probe “totally exonerated” him…no matter that his weak, feckless cowardly Senate Republicans abdicated their Constitutional oath to acquit him as predicted…he can’t and won’t let go. He’s trapped in his emotional prison, where his guilt and illegitimacy consume him.

Trump knows what he did. He knows we know what he did. We also now know that many Republican Senators know what he did. It’s not just Romney who’s issued a public rebuke of his corrupt behavior. Senators Lisa Murkowski (“shameful and wrong”), Lamar Alexander (“inappropriate”), Susan Collins (“wrong”), Marco Rubio (“actions meet a standard of impeachment”) are part of the bi-partisan chorus of condemnation.

But in what will go down as the greatest, most shameful partisan cover-up in political history, only Romney honored his oath to both country and faith. The others, though politically-expediently critical of Trump, disingenuously claimed his behavior is not impeachable. History will judge them accordingly.

So here we are. With an exonerated and acquitted yet still angry, bitter, resentful, insecure Trump ravaged by guilt and illegitimacy. It should be over, but it’s not. It will never be over. Not for Trump. That’s what guilt does to ya. It compels you to spend every minute of every waking day desperately trying to prove innocence.

It’s a life sentence.
Posted by The Ostroy Report at 9:15 AM No comments:

The Bar's Just Been Raised For Impeachment 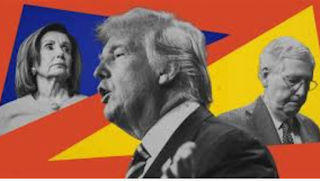 Twenty years ago President Bill Clinton was impeached for lying about sex. Last week Donald Trump got away with a whole lot more.

Senate Leader Mitch McConnell didn’t just conduct an evidence-and-witness-less sham trial which will go down as the biggest cover-up in political history, he essentially re-wrote the Constitution to make it that much harder to ever impeach and ultimately remove a president again.

So for all intents and purposes, here’s a shortlist of High Crimes and Misdemeanors that, according to Republicans, no longer qualify as impeachable offenses:
Trump attorney Alan Dershowitz last week punctuated this shocking reality with his even more shocking argument that the president cannot be impeached if he believes his re-election is in the national interest. This suggests that the president can do whatever the hell he or she wants including rigging the election…so long as he convinces himself America is better off for it.

To be sure, the Clinton impeachment lowered the bar. But Trump’s Senate trial, which gave a shamelessly partisan thumbs up to his myriad moral, ethical and legal transgressions, raises that bar to unfathomable levels, and leaves us with the question, what will it now take to impeach and remove an American president?
Posted by The Ostroy Report at 9:19 AM No comments:

Dear Democrats: Vote Like Your Life Depends On It…Because It Does

First it was the Mueller probe. Then impeachment. Democrats expected these investigations would drag Donald Trump, the most blatantly corrupt politician in U.S. history, through the jaws of justice and finally hold him accountable.

We know how that ended up.

Mueller came and went with Trump barely getting scratched.

And the complicit Republican Senate yesterday violated its oath to uphold the Constitution and be impartial jurors, while completely decimating its oversight role by conducting the first impeachment trial ever to be held without one single document or witness. That’s not a fair trial. It’s a cover-up.

Donald Trump now has free reign to be as dishonest, corrupt and treasonous as he wants. To trade America’s national security for his personal, financial and/or political gain.

To abuse the power of the presidency with impunity. Senate Leader Mitch McConnell just assured that.

So the big question is, what do we do now?

We vote, that’s what we do. And not in the typical 60% range. We need record turnout. We need to make history. We need a landslide.

We need to rally around whoever the Democratic nominee will be. Old people, young people, whites, blacks, Hispanics, LGBTQ, men, women, moderates, progressives…everyone needs to unite after the primaries and support the eventual nominee.

We need to donate money. Make phone calls. Canvas. Volunteer in voter registration drives. All of it, or any of it. Each of us needs to do something.

No more “Why bother, my vote doesn’t count” insanity.

We must unite. We must rally. We must support. We must vote.

Because, with this dangerous, undisciplined, impulsive, amoral, vision-less policy-bankrupt ego-driven madman in the Oval Office, it does.
Posted by The Ostroy Report at 10:32 AM No comments: