George W. Bush as One of the Greatest Presidents of All Time? 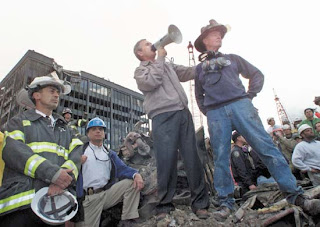 In the days and weeks following the horrific 9/11 terrorist attacks there was unequivocal support for the United States on the world stage. "We are all American" became the global rallying cry. At home, partisan bitterness disappeared, and red and blue America became red, white and blue America. Chants of "USA! USA! USA!" dominated sporting events, and the nation hadn't seen such uniform patriotism since World War II. They say events make the man and, to be sure, this was George W. Bush's moment to transcend his dubious past and go down in history as one of the country's greatest presidents.

The release this week of Bush's memoir "Decision Points" has put the focus once again on his presidency and his legacy. He's on a whirlwind image re-defining campaign, hitting the talk show circuit in a desperate attempt at redemption and to prove his wisdom and relevancy.

It's easy to reflect back and consider just how close Bush came to historical greatness, yet how far he swung away from that unparalleled opportunity to instead be considered one of the worst presidents ever. 9/11 was his defining moment, just as WW II was for Franklin Delano Roosevelt. Americans forgive and forget an awful lot in times of war and national tragedy and it was, for Bush, a missed opportunity of epic proportions, and one that shaped the world for many years still to come. It was the proverbial fork-in-the-road, and Bush took the wrong turn....with catastrophic consequences.

This week we've been shown countless times the photo of Bush atop the mountain of rubble at Ground Zero, his arm around that shell-shocked fireman, megaphone in hand, highly emotional yet projecting calm and steely assurance that America will recover and roar back stronger. Even after eight miserable years of his administration's militaristic and economic carnage, it's still hard to look at the picture and not feel a connection to him, even a respect for his leadership at that very tumultuous time. But that reverence passes quickly, and we are left with a great sense of loss knowing that for him and the country, that moment was a critical turning point in both his legacy and the fate of the nation. For both, it was all downhill (pun intended)from there.

It was easy on that fateful day to forget how Bush, James Baker and the Supreme Court stole the 2000 election. Our anger dissipated, and we rallied around our president and countrymen. We were one nation. But we lament that Bush wasn't able to build off of that moment on the rubble. The decision to invade Afghanistan and hunt and kill the Taliban, which sponsored, housed, funded and trained al Qaeda, was the right one. No one balked. Not Democrats, Republicans, Congress, the media, Wall Street or Main Street. The action received the full support of the country.

But one has to wonder how history would've changed for Bush, America and the world had he stopped there; had he focused 100% in Afghanistan on destroying the Taliban and al Qaeda, and tracking and capturing or killing Osama bin Laden. His popularity would've gone through the roof, and history would judge him as favorably as FDR. He would've presided over America during one of its absolute darkest days, providing leadership that would've restored not just national security, but Americans' collective sense of pride and patriotism. Instead, he saw a different path for himself. One that would drive a serrated wedge right down the heart of America and amongst our overseas friends and enemies alike.

His decision to invade Iraq in March 2003 sealed his fate. This was an unnecessary war. An unprovoked attack on a sovereign nation under false pretenses and manufactured/misrepresented evidence. Iraq, as we now know, did not, as the Bush propaganda claimed, possess WMD nor had it any connections to al Qaeda. It simply posed no threat whatsoever to the United States. Yet the Iraq charade was where Bush was overrun by neocons like VP Dick Cheney and Defense Secretary Donald Rumsfeld, who turned the once-promising leader who commandingly stood on that pile of 9/11 rubble into a manipulated puppet who exhibited an astounding lack of intellectual curiosity.

Unfortunately for him and the country, Bush ultimately would not be viewed as the wartime president who protected America and its people, lifted the nation's spirits and restored America's greatness. He did not tap the monumental international post-9/11 currency and use it to his or the country's advantage. He did not become a healer and uniter who rallied the world behind us as we fought the terrorist enemy. Instead, he sent thousands of troops to die in an elective war which took the U.S.'s military and intelligence focus off Afghanistan and al Qaeda, allowing bin Laden to escape into the treacherous northern mountains of Pakistan. He squandered $1-trillion fighting this unjust war of distraction, and together with an unregulated Wall Street and massive tax cuts to the rich, sent the country's economy into a tailspin that we're still digging out of. On the political front, he became the great divider, allowing Karl Rove and Dick Cheney, with help from despicable propagandists like Sean Hannity and Rush Limbaugh, to foment unprecedented partisan vitriol, which today paralyzes Washington.

Especially this election cycle, heightened by the controversy over the planned Islamic Center two blocks from Ground Zero, we've seen animosity and hatred of Muslims consume millions of ignorant Americans. We've seen fear-mongering Conservatives attempt to conflate Islam with terrorism much in the same way the Bushies conflated Iraq with 9/11. In retrospect, by invading Iraq and sending the country into a bigotry-fueled feeding frenzy, Bush ultimately allowed the terrorists to win. As we recovered from those horrific attacks on 9/11, what should've been America's brightest days as a nation have become our most embarrassing. It was not just the Twin Towers that came down that day, but the towers of tolerance and American values. And that's the real Bush legacy. A few folksy hours of Today Show and Oprah damage-control cannot and will not change that.
Posted by The Ostroy Report at 7:44 AM

Eloquent as usual, and agreed on all except your idea that GWB could have been a great president if only he had made the right choice. He did exactly what his stolen presidency was designed to do from the start. His only greatness has only ever been his great capacity to deceive.

I find your opening for Bush to be far too kind. There was never going to be any greatness from the Second Coming of Bush to the White House. If it wasn't for a rigged vote count fostered by the US Supreme Court and the Brooks Brothers Riot (of which I await the discovery of who donated enough money to ship half of the Republicans in Washington to Florida for the harassment of the Registrar), Bush would have been returned to obscurity - where he should remain.

Perhaps the largest roadblock George W. Bush ever faced was that he was the first president who EVER faced a domestic enemy while he fought foreign ones.

By that I mean the domestic enemies in the Democratic Congress and leadership who purposely sought to have America do poorly in combat for partisan political advantage. While the enduring message to you may be Bush atop the rubble with the first responders, one of mine is Harry Reid famously saying that the war is lost while American men and women were in harm's way. Needless to say, the war in Iraq was not lost and history shows that if we followed Reid and and the Democrats approach, a terrible outcome would have resulted.

It used to be said that partisanship ended at the water's edge. Twice during my lifetime Democrats refused to follow that basic rule. Three times if you include Tip O'Neill's infamous - and probably criminal - efforts to involve himself in the conduct of foreign policy when he went and sided with the murderous thug Daniel Ortega.

Democrats care about one thing - power, so that they can use it to addict the country to big government. Spending money on war and freedom counts for little.

funny how right wing psychos are so often 'anonymous'!