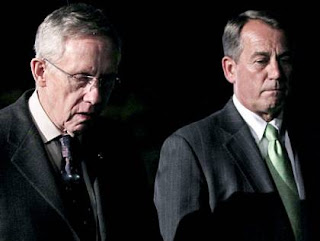 As evidenced by the budget showdown that took place last week in Washington, the Republican Party is doing everything in its power to ensure that there are more abortions than ever in the years to come. In its effort to slash billions in what it calls "government waste," the GOP's been fighting to end funding to Planned Parenthood on the duplicitous grounds that federal money should not be used to pay for the controversial procedure. What their fiery rhetoric doesn't include is the fact that no federal monies have been spent on abortions since the Hyde Amendment was passed in 1976 prohibiting such funding. So when House Majority Leader Eric Cantor (VA) goes on television, as he did on Fox News Sunday with Chris Wallace, and says that the fight over Planned Parenthood is because federal funds shouldn't be used for abortions, he's outright lying. This debate is not about abortion, but birth control. It's the Republicans' war on women.

The GOP's position makes absolutely no sense. For decades, conservatives have decried abortion, yet remain vehemently against sex education and family planning. They're steeped in religious ideology and insist on playing morality cop, sanctimoniously telling the rest of us what we should do with our bodies and in our bedrooms. MSNBC's Chris Matthews incredulously asked Friday night on his "Hardball" program, "How did they get on this bus?" The truth us, they never got off the bus. In fact, they were born on that bus. And no matter how deep of a political grave their values dogma historically digs them, they keep coming back to the hole. They simply can't help themselves. As Matthews said about the Planned Parenthood fight, "It's Schiavo-country," referring to the 1990's legal and Congressional battle over life-support which severely hurt the GOP and effectively killed the political careers of former GOP Senators Bill Frist and Rick Santorum.

To be sure, to end funding for Planned Parenthood is to stop providing critical health care to millions of needy women. Through 800 nationwide locations, the organization provides cancer screening, HIV and STD tests, contraceptives, education and empowerment. Planned Parenthood estimates it prevents over 620,000 unintended pregnancies and 220,000 abortions each year. Seventy-five percent of its clients are at or below the poverty line. Abortions account for just 3% of its overall activities.

But while rich Republican hypocrites rabidly strive to strip the poor and middle classes of their right to choose, they'll be the first to take little Muffy for an abortion the nanosecond there's a bun in the oven. And it'll continue to be justified with, "She's got too promising a life ahead of her to throw it away on a baby" and "It's the boy's fault."

It's a damned shame that in 2012 we're still arguing about abortion, and that funding for health care, family planning, education, the environment, seniors and the arts is considered "government waste." Congratulations 2010 voters. I hope you got what you wanted with your new Republican pals.
Posted by The Ostroy Report at 8:28 PM

Just remember; The tea bagging repubs who currently run the part do not care about the middle class or what they harsh cuts will mean to all of us.

They don't care. They have no clue as to how government works and the role it plays in all our lives.

Andy, You forgot to mention the 2010 voters' DINO pals.

If it wasn't for them being just a kinder, gentler version of the Republicans, the Democrats would still have control of the House.

The fact is, excluding the Progressive Democrats who got thrown under the bus by DINO Obama, we now have one party in the US, the Democratic-Republican Party, Inc., a wholly owned subsidiary of Wealthy Elite, Ltd.

So when the voters went to the polls last November, once again, they had a choice between stinky and stinkier. That's why so many of them stayed home, and that's why the unions and the Progressive Democratic voters refuse to support any more DINOs.

I hope the 2012 voters vote only for Progressive Democrats, and I hope they vote out all DINOs, including DINO Obama, in the Democratic Primaries.