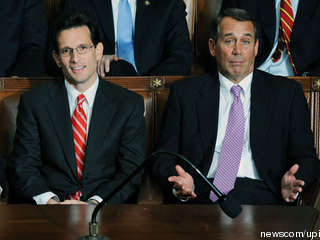 There was an actual headline in Tuesday's NY Times that the Republican led House of Representatives was taking up a measure to end food stamps and unemployment benefits for millionaires. I suppose their single-digit approval rating has finally prompted them into action to enact such truly meaningful legislation.

Thankfully, the House isn't wasting precious Chamber time on payroll tax cuts and
jobs bills. In fact, they've been quite busy this week. Below is a list of some
other critical measures passed by the House:

-A bill to end farm subsidies to NYC landlords

-A bill prohibiting Talmudic Law from being allowed in US courts

-A bill prohibiting ObamaCare from applying to pets

-A bill banning fairies and mermaids from serving in the military

-A bill to secure our borders from space aliens

-A bill restricting the presidency to only people with birth certificates

-A bill to make English America's official language. Oh wait, this one's actually for real...
Posted by The Ostroy Report at 8:00 AM