Who is the Real Mitt Romney? 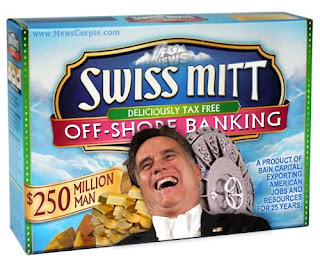 Mitt Romney's biggest problem is not that he's uber-rich. His problem is that he tries to pretend he's not. To be sure, Romney is not an everyman. He's a son of privilege, born on 3rd base yet arrogantly thinking he's hit the proverbial triple. He's a have with a capital H. But his real offense is in his clear and utter disdain for the have-nots.

Rick Santorum was right: Romney has no core. He will do and say anything to win favor and votes. He's redefined political expediency. The thing that voters hate more than a politician is a politician who doesn't own his own truth. And Romney's truth--be it his wealth, his questionable global investments, his dubious record at Bain Capital, or his record as Massachusetts governor--is precisely what he's been running from faster than Michael Johnson chasing another Olympic gold medal.


To be president of the United States means having principles, values and a vision for America. Romney lacks all three virtues. I may disagree with everything former president George W. Bush stood for, but I have much respect for him, especially afforded the luxury of hindsight. I'm sure that sentiment will arouse ire in many of my liberal pals, but those folks can't see the forest through the partisan trees. Objectively speaking, Bush lacked many things, but what he had was conviction. Love him or hate him, you always knew where he stood. And as president, he executed his vision, albeit with the most controversy perhaps of any president in modern history.

Barack Obama frustratingly falls somewhere in the middle of ineffective waffler and provocative visionary. He has a solid core and a strong moral compass. He's been a slow yet astute student of presidential politics, and I don't think we've come even close to seeing what he could ultimately deliver. While those who read this blog know I've been an extremely vocal critic of his over the years, I suspect that, if given a second term, he will rise to a level of accomplishment and greatness that will be an appreciable return on the Hope and Change investment.

The danger in a Mitt Romney presidency is that Americans are in a conviction-vacuum, lacking any meaningful insight into his true beliefs and vision. The billion-dollar question is, would he lead as a moderate, as he did in Massachusetts, or is the real Mitt Romney, the 2012 Tea Party-poisoned automaton, the candidate whose current rhetoric is so far to the inflammatory right that he makes Bush seem like the compassionate conservative he set out to be.
Posted by The Ostroy Report at 7:40 AM