The Newtown Massacre: Time For Legislation Not Conversation 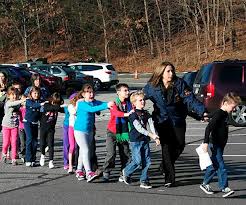 After a horrific bloody week of multiple massacres, the latest at an elementary school in Newton, CT where twenty 6-10-year-olds and six adults were killed, the tipping point has arrived. We need action. What we don't have the time, patience or stomach for is more stonewalling and can-kicking in the form of meaningless "conversation."

There's no rational or Constitutional basis for Americans to own military-grade weapons. Period. The Founding Fathers had Flintlocks, Muskets and single-fire rifles in mind when they drafted the Bill of Rights not 100-round Bushmaster AR-15's, Kalashnikovs or AK-47's. There's plenty of room in a civilized society for people to protect themselves, their homes and still shoot helpless deer if they so choose without allowing deadly combat-style assault weapons to end up in the hands of demonic, psychotic monsters.

There's no merit to any of the standard arguments made by gun enthusiasts to maintain the status quo. We are the most civilian-armed nation in the world, and not surprisingly the country with the most gun-related deaths as a result. We don't need more guns.  And if the shooter had a knife instead of a Bushmaster--as gun enthusiasts argue would happen if there were no guns--most of the twenty-seven Newtown victims would still be alive. What's more, increasing background checks won't really make a dent either considering that 75% of mass-murders in the United States obtained their weapons legally. What we need is legislation. And now.

As expected, we're once again hearing calls for improved mental health care--which could identify and treat these unhinged individuals before they kill--yet the Republican Party, which uses this topic as a convenient diversion from the issue of gun control, has vehemently fought against ObamaCare and any efforts to increase funding for health care. It's a convoluted philosophy akin to how they staunchly oppose abortion yet cut funding for sex education and contraception.

The solution to gun violence in America can be simple and quick, but it's made very complicated by a disproportionately powerful gun lobby that spends millions of dollars annually to hold lawmakers hostage while riling up their constituents with deceptive, purist propaganda.

After Friday's massacre, an extremely emotional and visibly shaken President Obama addressed the nation and called for Americans to "come together and take meaningful action." White House Press Secretary Jay Carney told reporters after the shooting that there'd be time to discuss gun control but that he didn't believe that "today is that day." Sen. Dick Durbin (D-IL) said on Fox News Sunday that we need "thoughtful, calm reflection" on gun control and the Second Amendment.

This is weak and ineffectual leadership in a time of national crisis. I'm sorry, but now is precisely the time to call for gun legislation. I'm sick and tired of hearing politicians talk about how "now is not the time" or that we need to have "meaningful conversations" or "thoughtful, calm reflection." Enough. We don't need anymore damn conversation. That's all we ever have is conversation. Every time some psycho sprays a mall, business, movie theater or a school with bullets we spend days and weeks talking about it and then it quickly becomes a forgotten subject until the next massacre. Then the go-nowhere conversations begin all over again.

And just what exactly do these "conversations" look like? Do they have a timeline? A clear objective? Or are they merely more of the same empty chatter designed to make politicians feel good about themselves...as if they're actually doing something to stop the barbarism? It's time to stop talking. No more conversations.

Consider what New York City Mayor Michael Bloomberg said following the massacre:  "With all the carnage from gun violence in our country, it's still almost impossible to believe that a mass shooting in a kindergarten class could happen..We heard after Columbine that it was too soon to talk about gun laws. We heard it after Virginia Tech. After Tucson and Aurora and Oak Creek. And now we are hearing it again. For every day we wait, 34 more people are murdered with guns...President Obama rightly sent his heartfelt condolences to the families in Newtown. But the country needs him to send a bill to Congress to fix this problem. Calling for 'meaningful action' is not enough. We need immediate action. We have heard all the rhetoric before. What we have not seen is leadership - not from the White House and not from Congress. That must end today. This is a national tragedy and it demands a national response."

And now we have twenty dead children. Twenty families that have to face each morning with the unimaginable sight of an empty bed where a sweet child once slept. Twenty-seven families who'll be putting their loved ones in caskets as they attend the saddest funerals imaginable. The Newtown families have lost wives, husbands, mothers, fathers, brothers and sisters. As one who's wife was brutally murdered, I have a sense of the horror they're all going through. When will this unnecessary carnage end? That we can't pass laws that protect even our children at school is unconscionable.

It's time to bombard politicians with emails, letters and calls demanding they take immediate action in addressing gun violence. It's time to threaten them with the 2014 election if they fail to pass meaningful assault weapons legislation. It's time to stop talking. No more conversations.

And it's time to stop sugar-coating the details of this massacre in an effort to be politically correct. I want the the gun-rights crowd to clearly understand the huge cost of their intransigence. As these Rambo-wannabe's lay their heads down to sleep each night I want them to first hear the chilling screams of those helpless terrified children. I want them to see the images of those precious faces as they cowered at the feet of the devil-incarnate, as their innocent little bodies were riddled with bullets. I want them to see the blood-spilled classrooms. This is the price they must pay for their colossal selfishness.

California Sen. Dianne Feinstein Sunday on "Meet the Press" announced she will introduce an assault weapons bill in the Senate, with the same bill to be introduced in the House, on the first day Congress returns in January. The odds are it will fail. And until our elected officials grow some balls, and can stand up to the NRA the same way some Republicans are now telling Grover Norquist to take his "no tax pledge" and shove it, the likelihood is that nothing at all will change. Maybe it'll take a deranged, diabolical maniac to shoot up the U.S. Capital, or the offices of the NRA, in order for the conversations to end and the legislation to begin.
Posted by The Ostroy Report at 7:14 AM

The biggest risk we have is for the conversation to be all about guns instead of the coarsened society that permissive attitudes has created.

Bloomberg can whine about guns all he likes - but it's on him that he allowed the Transit Authority to rent out all the billboards in the Times Square shuttle station to Call of Duty, Black Ops - a game dedicate to brutal killing with assault weapons aimed at people like Adam Lanza.

Until the people clamoring against guns start talking about the way their very own policies have degraded the society, there's no point in having a discussion.

Guns have been around for ages in quantity, but when Andy Ostroy was a kid, you didn't see mass killings so often. What's changed is a degraded society. And that degradation comes from what a value system that has dramatically declined across the board.

McVeigh killed 168 people with a truck and fertilizer - his toasted brain didn't need a gun.

Newtown, Aurora, Columbine, Virgina Tech - all of this can be traced to the liberal, permissive policies embraced in this country and spread around the world.

Left wingers - pick it up and hold on to it. You guys own all this death.