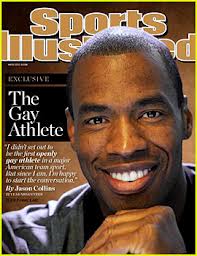 So Jason Collins, the 7-foot NBA center, is gay. His ground-breaking declaration came in a Sports Illustrated article published Monday. And yes, it's 2013 and times have changed, as the jubilation across the country, and among several prominent players, has demonstrated. But once we get past the hoopla and the effusive praise for the pioneering 34-year-old currently with the Washington Wizards, the real question remains: what does his historic coming-out mean for him, the NBA, pro sports and society as a whole?

First let's get the good stuff out of the way. Many of the league's biggest stars, including Kobe Bryant, Dwayne Wade, Steve Nash and Jason Kidd, quickly came out in support of Collins. Social media sites such as Facebook and Twitter were abuzz with viral praise over his courageous decision. Michelle Obama  tweeted "So proud of you Jason Collins! This is a huge step forward for our country. We've got your back!" It's hard to ignore the powerful symbolism behind America's first black First Lady rallying behind the nation's first openly gay, and black, active pro athlete.

But as Ms. Obama knows all too well, while her husband Barack has broken through tremendous racial barriers in becoming the country's first black president, it certainly did little to erase the ugliness of prejudice and racism. In fact, there are those who'd argue that his presidency has fanned the racist flames for many, perhaps as evidenced by the unprecedented partisan gridlock in Washington and by the most blatant disrespect ever shown a sitting U.S. president (see Rep. Joe Wilson's "You Lie!" shout during Obama's September 2009 speech to Congress).

While there indeed were those welcoming the newly minted gay Collins with open arms, ignorance and intolerance surfaced as well. On ESPN, NBA analyst Chris Broussard called homosexuality "an open rebellion to God" and implied that gay people can't be Christians."I'm a Christian. I don't agree with homosexuality. I think it's a sin, as I think all sex outside of marriage between a man and a woman is. If you're openly living in unrepentant sin ... that's walking in open rebellion to God and to Jesus Christ."

And Mike Wallace of the NFL's Miami Dolphins tweeted "All these beautiful women in the world and guys wanna mess with other guys."  Wallace's and Broussard's comments--like Karl Malone's ignorant rant in 1992 when Magic Johnson announced he'd contracted H.I.V--differ in definition and motivation, but they echo the common thinking among many Americans.  Wallace and Broussard are just two jerks dumb enough to voice what millions more in the silent minority are no doubt thinking. The truth is, professional sports is but a microcosm of the nation, and the social patterns that exist in society overall will be on display as the Collins story continues to unfold.

To be sure, religion is going to play a key role as Collins' coming-out takes shape, as players (many of whom pray on court before games) and coaches' (Golden State Warriors coach Mark Jackson is a pastor with his own ministry) personal faith muddies the debate...just as it does outside professional sports. Ignorance, fear and machismo will surely continue to permeate locker rooms. It would be incredibly naive to think that the majority of professional athletes, many of whom come from poor, uneducated, deeply religious and intolerant environments, won't look at Collins' with a jaundiced eye, or believe that he's looking at them with a lascivious one. There's simply way too much nudity in locker rooms for that not to happen. The 'catching Aids from a toilet seat' mentality isn't disappearing simply because Collins decided to come out.

The real test of America's true progress, and the NBA's acceptance, will be in whether Collins, who becomes a free agent July 1, will be suiting up for a team come opening night next season. "If he's not on a team, he's just another guy who did it at the end of his career, and he retired," said Jim Buzinski, co-founder of Outsports, an online site covering gays and sports.

Posted by The Ostroy Report at 7:23 AM