Maureen Dowd is Wrong About Reince Being Right 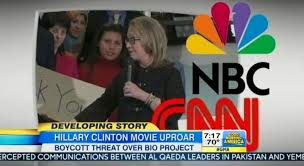 In her New York Times op-ed Wednesday columnist Maureen Dowd writes "Reince Priebus says a lot of goofy things, but the chairman of the Republican National Committee has a point." She's referring to Priebus's latest diatribe in which he's accused NBC and CNN of being in the tank for Hillary Clinton, providing her with "puff pieces" and "extended commercials" through their planned mini-series and documentary respectively.

"Hillary tries awkwardly to airbrush her history, but everybody can use some professional help," Dowd continues. "By the time Hollywood is finished, Hillary could be fighting critics with the sexy charm and kickboxing skills of Catwoman."

So Priebus has his panties in a snit because he thinks, as Dowd suggests, that in these productions Clinton will come off looking like a super-human political goddess. But there are those who will argue that the former First Lady, U.S. Senator, Secretary of State and likely 2016 presidential candidate has as much, and maybe more, to lose by the films as she does to gain.

Let's remember one thing: while Hillary is wildly popular with the Democratic base, she's a veritable lightening rod with everyone else. She narrowly won the popular vote against Barack Obama in the 2008 Democratic primaries with 48%, and many of the 47% who voted for him can't stand her. Her approval rating has dropped 12% since last year (she's taken hits with men, independents and Republicans) and polls show that she's virtually even in head-to-head match-ups against each of the likely Republican candidates. She's certainly no shoe-in.

Consider the controversies and scandals Hillary's been a part of, either directly or through her husband and former president Bill Clinton. There's TravelGate, Whitewater and the mystery shrouding White House staffer Vince Foster's death; the infamous "stand by your man" comments during the Monica Lewinsky affair; what some called racially insensitive comments by Bill and Hillary during the '08 campaign; and the Benghazi debacle. None of these moments from Hillary's past would benefit her to be showcased on television, and I suspect she's as pissed off about NBC and CNN's planned programming as Priebus.

While Dowd cites the television movie "Game Change" and how Julianne Moore's Emmy-winning performance cemented Sarah Palin's reputation as a bona fide dumbbell, the bigger point, and contradiction, is that Moore's radiant beauty did little to transform Palin's ignorance into "sexy charm." The movie only held a mirror up to the Wasilla Wonder and she did all the rest.

As for Priebus, he should stop whining like a 12-year-old about what the so-called liberal media does or doesn't do for Hillary Clinton. Let him call Rupert Murdoch and ask Fox Television to make all the movies they want about the Republican candidates. The trouble is, Murdoch's a fantastic businessman. He's not going to invest in films no one will want to see about people no one cares about.
Posted by The Ostroy Report at 8:17 AM