Stick a Fork in Christie 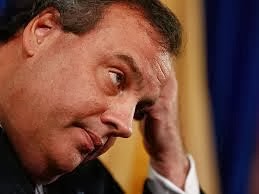 There's a reason why I love politics so much. I'm fascinated by the winds of change and how sweeping and merciless they can be. In no other landscape can one's fortune change so dramatically so quickly over something so stupid. Consider the Greek Tragedy that threatens to swallow New Jersey Gov. Chris Christie's future.

Consider Christie's current fate. One day he's soaring high above the muck as the Republican Boy Wonder.  Anointed The Great GOP Hope to regain the White House from Democrats in 2016. Revered as the tough-talking, straight-shooting everyman who's connected not just with conservatives, but independents, women, minorities and just about everyone else. The Washington outsider who'd reach across the aisle to get D.C. operating efficiently again. The focus of Time Magazine's November 18th cover entitled "The Elephant in the Room." And then overnight the much-anticipated shoe drops and everything turns to shit, thrusting him squarely into the hottest political scandal and into his worst nightmare.

BridgeGate. This now-infamous scandal over the George Washington Bridge access-lane revenge-closings all but ensures that Christie's chances of becoming President of the United States are no longer any greater than mine. The New Jersey State Assembly, investigating the case, will be issuing subpoenas, possibly as early as today, to Bridget Anne Kelly and Bill Stepien, the two former top aides Christie threw under the bus last week. Their testimony under oath, especially if given immunity, could be devastating to the governor. There's even talk among state legislators of eventual impeachment. Adding fuel to the fire is a new federal investigation announced Monday into allegations that Christie misused Hurricane Sandy relief funds to produce one or more re-election campaign ads. Hear that sound? That's the other shoe dropping.

It's truly astounding, albeit not terribly surprising to many, just how swiftly Christie's currency has devalued. His reputation as an arrogant, self-serving bully precedes him. So it was not a matter of if but when his skeletons would come flying out of the closet. The only real question at this point is just exactly what will be the cause of his political demise: incompetence, ethical lapses, criminality and/or a cover-up.

Perhaps that's what the 24/7 news media will now focus on given that their heretofore Christie-as-2016-shoo-in predictions now appear terribly premature.
Posted by The Ostroy Report at 7:18 AM