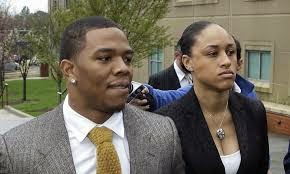 I am not a violent person. It's not in my DNA to use my fists, or any type of weapon, to harm anyone, let alone a defenseless woman. Even if provoked, it would be hard for me to cause physical harm to another person. That said, if I felt threatened, or my family was in danger, I'm sure the adrenaline would kick in and I'd do whatever necessary to protect myself and my loved ones. But I could never slam my fist into someone's head and knock them unconscious simply because I was angry.

Which is why I believe we're missing the main point in the Ray Rice domestic violence case: that nothing except an intensive, lengthy psychological rehabilitation process will help the Baltimore Ravens running back become a better man. It's terribly misguided, and an oversimplification of the root cause of domestic violence, to think that an indefinite suspension or lifetime ban from the National Football League will "teach him a lesson" and provide some deterrent effect among offenders. Domestic violence is not about "lessons." It's not about conscious, rational thought. It's purely about uncontrollable rage, and the use of violence, often deadly, to express that rage.

Studies have proven that dealing with criminals punitively (and yes, domestic violence is a crime, not something between "Rice and his wife," as some female nitwit at Thursday night's Ravens game told a reporter) has little or no effect on preventing future crimes. Do we honestly think that the next time some pro athlete is about to coldcock his woman in a fit of anger he's going to stop and say to himself, "I shouldn't do this...it could cost me my career?" Our prisons are full of people who've seen others get punished for the very crimes they then went on to commit.

Rage has no brain. Rage doesn't stop to think about consequences. Rage acts first and thinks later. It cannot be "treated" punitively.

Should Ray Rice be banned for life from the NFL? Personally, I'd like nothing better than to see him get everything I feel he deserves, including criminal prosecution and prison time. He's a violent criminal and a coward and I detest his behavior. So yes, if his NFL contract includes a morals clause which specifically calls for such a ban under the circumstances, he should be barred from ever playing professional football again. But let's not kid ourselves. More importantly, he needs treatment. Psychological treatment. He needs to control the very rage that deemed nothing wrong in punching the lights out of his then-fiancee, Janay Palmer, and dragging her limp, unconscious body out of a hotel elevator like a dead fish. A lifetime ban will not stop him, or anyone else, from again causing physical harm to another human being.
Posted by The Ostroy Report at 7:21 AM

she went on to marry the guy Andy---whats that say about HER???