Hey GOP, Please Keep Steve Scalise at the Top of Your Junk Pile 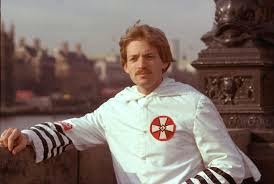 The Republican Party's strategy for reaching across the cultural and racial divide, in an effort to expand its tent for the next major national election, is to throw its full support behind embattled Louisiana Congressman Steve Scalise who, by his own admission, spoke in 2002 to The European-American Unity and Rights Organization (EURO), a white supremacist group founded by former Ku Klux Klan leader David Duke, Scalise claims he did not at the time know the origin of the group or Duke's involvement.

Scalise, who as Majority Whip is the GOP's 3rd highest ranking representative, told a reporter almost twenty years ago while running for office that he was like "David Duke without the baggage." Was this simple pandering to a key voting block or a much clearer window into the man's political and moral psyche? Either way, he knew exactly who he was targeting.

As House Republicans vote Tuesday to elect its leaders, many on the right have been all too quick to defend Scalise's utterly implausible story, even blaming Democrats for the controversy. Speaking on MSNBC's Hardball Monday evening, Republican strategist and former Dick Cheney advisor Ron Christie said: "I think the Democrats are being disgraceful in the way that they're playing the race card. The Democrats are dividing this country..." he said, while specifically naming DNC chair Debbie Wasserman Schultz and White House press secretary Josh Earnest.

In a statement released Monday Wasserman Schultz said: "As the new Congress begins, nothing discredits Republican claims of 'outreach' and bringing people together more than their decision to keep Steve Scalise at the top tier of the elected leadership of their caucus...Anyone living in this century should have known better than to attend and speak at a white supremacist event, particularly one founded and led by David Duke, and Scalise's explanation that he wasn't aware isn't credible by a long shot."

And Earnest, during Monday's White House press briefing, said: "There's no arguing that who Republicans decide to elevate into a leadership position says a lot about what the conference's priorities and values are."

So let's get this straight: what riles Republican officials is not that their party has racists, who do and say despicable things, but rather the Democrats who make public their words and actions. Welcome to 2015, where condemning a racist is playing the race card.

To the GOP I say, please keep Steve Scalise in his leadership post. Leave him up there as a glaring symbol of what your party stands for. Let Americans know who you support. Who you defend. Who you reward with power. Who you call a "man of character."
Posted by The Ostroy Report at 10:37 PM