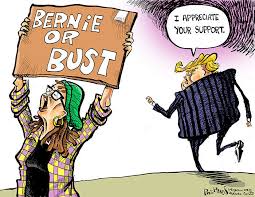 Judging from the first day of the Democratic convention, it seems that there is still a lot of anger, resentment, frustration and obvious disunity. The boos at the mere mention of Hillary Clinton's name were loud and forceful. And at this point in time, they were quite surprising and unsettling. Whether they are deserved or not is another question.

Look, we get it. You're pissed off. Your guy lost, you think the system was rigged (the DNC email scandal certainly stokes those flames) and you hate Clinton's choice of Tim Kaine for vp. But what we don't get is your continued inability to see the stark differences between Clinton and Donald Trump. The liberal/progressive vs. fascist contrast between them, and more so, how your overall interests are clearly best served by Hillary....while Trump stands for everything you don't.

Not even after last week's substance-bankrupt dystopian shit-show called the Republican convention have you been able to see the bigger picture. Not even after several rousing speeches by Elizabeth Warren, Cory Booker, Michelle Obama and Bernie Sanders at the opening night of the Democratic convention drew you a picture of these differences, and the gravity of the situation. Not after they all implored you to lay down the gloves and join the freedom vs. tyranny fight against Trump.

You're still pissed, and you seem hellbent on being pissed. Almost as if you're enjoying the rebellious, contrarian ride. Do you really want to throw this country's future away by handing the election over to an ignorant, sexist, misogynistic, xenophobic, racist dictator-in-training? Do you really want Trump as the role model for your children? Can you ever see his mug etched on Mt. Rushmore? Seriously, people, are we really having this conversation at this critical juncture?

Your inspirational leader, Sanders, is practically begging you to move past your emotions and your disappointment to help him ensure that Trump is never elected president. If he is able to move on past the acrimony and disappointment of his campaign against Hillary, and put his heart and soul behind her, why can't you? What makes you more knowledgeable about Bernie, more committed to his message, and his view of America than the revolutionary-in-chief himself?

With all due respect, you're beginning to sound like a bunch of petulant children who kick and scream whenever they don't get everything they want. You're the equivalent of the sandlot brat who whines "it's my ball" and quits the game because he doesn't like the way it's being played or because he's not winning. This is not behavior of revolutionaries. A revolution doesn't happen overnight, which is why Sanders is pleading with you to continue the fight with him well beyond the convention and the election. Real revolutionaries fight to the death and put the cause before themselves. You're not doing that. You're making this all about you.

If you fail to show up for Hillary in November, and Trump wins, then your revolution will prove to be nothing more than a faddish exercise in futility by privileged white millennials who shamefully cut off their noses to spite their faces...while destroying everything that Sanders worked to achieve for you. Because President Trump will toss it all in the trash. The gains made on minimum wage, income inequality, free college, Wall Street/big banks, criminal injustice, the death penalty, Citizen's United, climate change, super delegates and more will have been in vain. They'll end up like sad bullet casings on the failed battleground of your ill-fought, prematurely ended revolution.

The Rolling Stones wrote "You Can't Always get What You Want." And they also suggested, "But if you try sometime, you might find, you get what you need." With Hillary, you may not get everything you want, but you'll definitely get most of what you need. With Trump you'll get a big fat sweaty middle-finger shoved in your face.

The comedian Sarah Silverman, who fought long and hard for Bernie this past year, astutely opined Monday night on the convention floor that your behavior is "ridiculous." Which, given everything that's at stake, it most definitely is. How about proving her wrong. I bet she'd love that...
Posted by The Ostroy Report at 2:08 PM

At this point, It's not about Bernie, it's about Hillary.

It's the poisonous, triangulation of the Clinton era politics that is not acceptable, and beyond negotiation.

There is no unity with corruption.

You are the one that simply doesn't get it.

But not another Clinton. We need to move on and STAY moved on.

Insisting on nominating Clinton is supporting Trump for President.

I hope you enjoy being someone who supported electing him.

As an election integrity activist, the issue is the voter suppression during the primary elections and the curious vote totals that did not match the exit poll results. As it appears now, the Clinton campaign -- or those assisting it -- appear to not have trusted the voters to vote in their first female President, and had to rig the election to make sure she got the nomination. There is a lot of evidence outside of the emails.

If there hadn't been election tampering, it is likely Sanders would have gotten more votes and/or more delegates. This is admittedly a difficult charge to prove and they know it, because our voting machine companies and machines are owned by private, for-profit partisans who secretly count the votes.

So, you want Bernie supporters and election integrity activists to throw our support behind a candidate or a Party that we believe rigs elections because this is the lesser of two evils?

If dissent, outspoken rejection of the status quo, and civil disobedience in a political situation or society in general is "ridiculous," then the march on Selma was ridiculous and women fighting for the right to vote was ridiculous and Stonewall riots were ridiculous.

I'm sure there were timid sycophants of the rich and powerful in those eras telling the activists they were ridiculous too. You've made your choice of where your place is in history. Let others choose theirs.