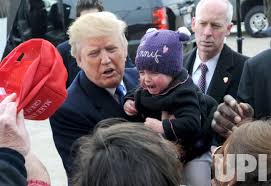 Donald Trump, facing harsh criticism over his recent attacks on the Gold Star Khan family and what many believe is a call for Hillary Clinton's assassination if she became president, is now again embroiled in controversy over yet another unconscionable act: attacking a baby.

After catching flack at a Virginia rally two weeks ago for suggesting a crying baby should be removed, Trump this week got into a heated shouting match with a 9-month infant at Orlando Airport while en route to a speech before evangelical leaders. As supporters and protestors gathered in the terminal, the baby began hysterically crying, interrupting Trump's impromptu press conference:

"What's with you babies, lately!? You're acting like little babies. Nasty, spoiled, mean little babies! Who sent you, Crooked Hillary!?"

But the baby just kept looking at Trump and crying.

"Get him outta here!" Trump barked at security. "Get that ugly, stupid, baby outta here! We're not gonna let any babies hijack this press conference! You're a stupid baby! Wah, wah, wah...what is that? You, you can't even speak English. Where ya from, Mexico? I'm gonna build a wall around your crib, now get outta here! We don't want any stupid babies here, am I right!?"

As supporters chanted "Lock up the baby!," the child's mother shouted an expletive at Trump and abruptly left.

"The baby started it. He was being a very, very disruptive mean little baby. Many people said I was right to do what I did. Look, I'm a counter-puncher. You hit me, I hit you back 100 times harder...and I don't care if you're a 9-month old baby. The baby deserved it. And he owes me an apology."
Posted by The Ostroy Report at 1:54 PM