Bush's War Machine Revs Up. How Many Soldiers Have to Die Before this Dangerous Fool Realizes That It's Over? 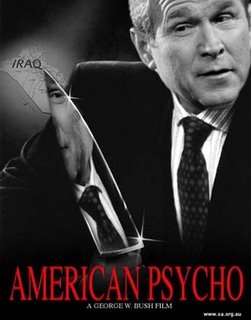 Back in November, an overwhelming majority of voters sent a loud anti-war message to President Bush by punishing Republicans and giving decisive victories--and control of both houses of Congress--to Democrats. Did he get the message? What do you think? In true Bush "it's-my-ball" arrogance and stubbornness, the Decider-in-Chief will go before the American public tomorrow evening and make his request to send 20,000 more soldiers to Iraq in a "troop surge" designed to regain control over Baghdad. That's right. Election, shmection, I'm the Decider. Remember, this is a guy who, with 51% of the vote in '04, proudly claimed he had a "mandate."

It's been 3 1/2 years and 3000 dead soldiers since the worst military blunder in U.S. history began. It's such an obvious failure that even the generals on the ground are saying more troops will not accomplish Bush's goals. Mind you, this is the same president that's on record as saying that the generals will be the ones to decide when and if more troops are needed. And the same president who said that sending more troops will send a message to the enemy that they're winning. But this dangerous fool couldn't care less what anyone thinks because, as long he doesn't pull out, he hasn't lost. As long as he keeps us fighting, in his delusional head, there's still a chance of winning. It's like those internet stocks I still hold from the 90's that are virtually worthless. I haven't lost anything until I sell, right?

Does this maniacal war-monger really think that by sending 20,000 more troops we'll be getting any closer to achieving our long-range goals in that country (whatever the hell those goals are)? That we'll secure Baghdad? That we'll regain control of the Sunni Triangle and send a strong message to Muqtada Al Sadr's al Mahdi army and other Shiite militia that Democracy will prevail? Of course not. Just like every other time the U.S. intensified its military efforts. This is a country that mocks the U.S. A country led by a defiant Prime Minister Nouri al-Maliki, who's made it clear he's running the country, not Bush. A country that punished it's former torturous dictator by hastily hanging him and taunting him. They've clearly come a long way, huh? Un-Curious George should be proud of the thriving Democracy he's created.

With Iraq already mired in large-scale civil war, the last thing we should be doing is sending more young men and women to die in Bush's quagmire. It's pathetic the level of denial our president is in. And if it's not denial, it's something worse: intentionally ignoring the facts on the ground, choosing to send soldiers to die because he can't stomach the thought of losing. Well, some battles are won and some are lost. And this one's over. Someone needs to stop this maniac before he kills again and again and again.

On another subject......we could use your help at The Adrienne Shelly Foundation, a non-profit organization dedicated in my wife's honor to help carry out her spirit and passion, with the goal of providing film school scholarships and grants to women filmmakers. As many of you know, Adrienne was brutally killed here in NYC on November 1st. Please visit our website to learn more about our mission and to make a donation. Every little contribution helps preserve Adrienne's legacy, and to help create something positive out of this horrible tragedy. Thank you.
Posted by The Ostroy Report at 7:06 PM

Bush is a pimp for the oil and gas industry plain and simple...

He might just be right,hasnt done anything right yet.put his whole regime including his drunken daughters,the whole bush family and anybody that thinks hes right including all the congress that voted for going to Iraq and kept funding the mess. put them in them unarmored vehicals no guns and turn them loose in Bagdad

I've been blogging about this lunatic Texas since I started blogging last March.

Bush is clearly "not right." He's a dangerous ne'er do well, a hereditary pawn and very likely a sociopath.

The Dems must stop him from escalating the Iraq war. In fact, the Dems in the House must begin to cut funding -- just as the Congress did at the end of the Viet Nam war, an act that forced Nixon's hand.

Stop talking of just 3000 dead in Iraq. My father told me back in 1965, when Nam was in the future for me, that on the eastern front the ratio of dead to wounded was 1 to 3. Nowadays the ratio is probably closer to 1 to 6 maybe even 1 to 10. How many of those wounded are ever going to "live" again? It's my belief that the effective casualty count should be closer to 10,000 Americans and most certainly the 650,000 Iraqis Lancet estimates, of which how many relatives will now try to seek revenge?

Any Armenians blow up a Turkish diplomat lately? Their memory goes back 90-100 years.

How Many Soldiers Have to Die?

Not enough died exterminating "Indians"; too many died rolling back the Nazis; apparently enough died killing little brown Vietnamese (at least enough to make them walk away a defeated, dejected bunch of murderous losers); certainly not enough died defending the enslavement of black people (they are still around - now parading as Republicans who think the Civil War should have been won the other way around). Yes indeed, after what we've done to Palestine (through our "good friend" Israel) and after what we've done to Iraq (what 50,000+ dead on a pack on convenient lies?) - yes, alot will have to die for us to definitively LEARN that the age of pissing on brown, black, and indigenous people is near an end.

Oh, and now go ahead and kill black people in Somalia...ratchet it up a bit more.

How Many Soldiers [mercenaries] Have to Die? (can't these GI's work at a mall or something?)

George, I love you!

Only you can make my dreams come true!

Let's see what comes out of the congressional hearings.

With Watergate, the congressional hearings were the key to Nixon's resigning. It was then that the Republicans went to Nixon and told him he has no choice but resign.

Many readers here will not be surprised to hear the information that will come out. It will be interesing to see if the rest of America finds it all very shocking.

On Truthout, Chris Floyd, a UK Correspondent for the INDEPENDENT, reports that the Iraqi Council of Ministers is about to approve a new "hydrocarbon law" drawn up by the Bush admin. and "the UK lackey" which will "radially redraw the Iraqi oil industry and throw open the doors to the third-largest oil reserves in the world" and "would allow the first large-scale operation of foreign oil companies in the country since the industry was nationalized in 1972. "As the paper notes, the law will give EXXON, MOBIL, BP, SHELL and other carbon cronies of the White House unprecedented sweetheart deals, allowing them to pump gargantuan profits from Iraq's nonimally state-owned oilfields for decades to come." Floyd says the was the goal, and with the "hydrocarbon law" Bush has achieved the "victory" he's aimed for from the beginning. "And the driving force behind his planned 'surge' of American troops is the need to preserve those fruits of victory that are now ripening in his hand."

Let's think about the Bush proposal from the down and dirty (Rove) political viewpoint. From this viewpoint the issue is not the troops, or winning the war. The issue is the 2008 election. By Bush proposing to send 20,000 troops, if the Democrats vote against it, they will then be blamed for losing the war in Iraq. If the Democrats vote in favor of sending the troops, then they will be portrayed as supporting the war; that it is a bipartisan effort and the Republicans cannot be soley held accountable for the events that transpire. The bottom (political) line--take the Republican party's responsibility for the Iraq war out of the 2008 election as much as possible. Yes, it will mean more US troops will die in a never should have happened war, but, hey, its the price we have to pay to pursue US oil and strategic interests. And we all agree with that---right?

"How Many Soldiers Have to Die?"

Our "Vets" killed three million people in Vietnam T - Bone and any American Vet who did the killing, maiming, and abusing did and should have come back a "defeated, dejected, and murderous loser."

Do you know any of these losers?

They're there (indefinitely) to Guard The OIL.

Here's a suggestion. Use the pressure of the people to force an televised debate between George Bush and the triumvir of living ex-presidents. Think of the ratings. This would probably be watched by over a billion people.

At last -- a visible protest MoveOn is planning a march in D.C. on January 27th. Join them.