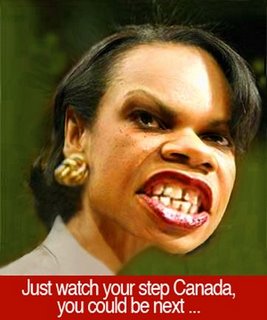 It's not an increase. It's not an escalation. It's an "augmentation." No, we're not talking about fixing a pair of saggy boobs here folks, it's how Secretary of State Condescending Rice described Bush's planned 20,000 "troop surge" into Baghdad. When challenged by a bi-partisan panel of Senators this week, Condi lied, side-stepped and offered up nothing but a bunch of Bushevik bullshit. In one day this administration plays more word-parsing and semantics games than Bill Clinton ever did in eight years.

HAGEL: My question was the escalation of American troops in Iraq.

RICE: But I think you asked who was supporting it. And I said the Kurdish parties, Prime Minister Maliki and his Shia allies, and the IIP support a plan to do this. And they know that the augmentation of American forces is part of that plan.

Now, as to the question of escalation, I think that I don’t see it, and the president doesn’t see it, as an escalation. What he sees…

HAGEL: Putting 22,000 new troops, more troops in, is not an escalation?

RICE: Well, I think, Senator, escalation is not just a matter of how many numbers you put in. Escalation is also a question of, are you changing the strategic goal of what you’re trying to do? Are you escalating…

HAGEL: Would you call it a decrease, and billions of dollars more that you need for it?

RICE: I would call it, Senator, an augmentation that allows the Iraqis to deal with this very serious problem that they have in Baghdad.

Hagel has called the Iraq quagmire "the most dangerous foreign policy blunder in this country since Vietnam."

Sorry Condi, but sending 20,000+ more troops into Iraq--about 15% of current totals--sure as hell constitutes an increase. And a pretty big one at that. But why should we expect truth and honesty from these liars now, after 3 1/2 years of their miserably failed war...a debacle that they're now desperately trying to salvage unfortunately at the expense of our young men and women.

Forget the fact that voters in November delivered a loud anti-war message to Bush. Forget that a new Washington Post-ABC News poll taken after Bush's January 10th speech showed that 61% of Americans now oppose such an increase. Forget the advice of the generals. And of even most Republicans now. Of any sane human being. No, this president is intent on carrying out his reckless, lethal plan for Iraq, no matter what anyone thinks or says.

Condi Rice is a walking, talking insult to every American. I'm not so sure she's merely a mouthpiece for Bush. I'm convinced she believes her own reprehensible rhetoric about peace, stability and Democracy in the region. She might even be more of a loon than her deranged boss, if that's at all possible.

Listening to Condi's incessant drivel makes me want to scream the line from that classic scene in 'Dog Day Afternoon" where Al Pacino's desperate bank-robbing character turns down a shady deal with cops by saying to the Detective, Charles Durning, "Kiss me. Kiss me. "Because I like to get kissed before I get fucked."


On another subject......we could use your help at The Adrienne Shelly Foundation, a non-profit organization dedicated in my wife's honor to help carry out her spirit and passion, with the goal of providing film school scholarships and grants to women filmmakers. As many of you know, Adrienne was brutally killed here in NYC on November 1st. Please visit our website to learn more about our mission and to make a donation. Every little contribution helps preserve Adrienne's legacy, and to help create something positive out of this horrible tragedy. Thank you.
Posted by The Ostroy Report at 9:51 PM

I watched the Secretary parse words with Senator Hagel.She definitly has a future outside of Government. Selling used cars would be a laudable objective.

I watched some of the hearings, and not only is her demeanor confused, untrustworthy, condescending and full of lies, but she looked down right scary. Her dark, sunken in eyes. She seems hollow. I suppose you would have to be, to do what she does.

Most of the major players in this adminitration seem unusually nutz, these days, even for them.

The night of the big presidential speech, Junior appeared as if he might pee his pants.

Then Condi comes of as dangerously psychotic, and did anyone else notice how subduded Gates was? Maybe that is his usual demeanor. But his face did not seem to believe what his mouth was saying.

Today we have Cheney saying that the American people and their new congress can.... well...go eff themselves. The NeoCon agenda will go forward, no matter what.

We have a huge constitutional crsis!

We watched some of the hearings and were disappointed in Condi's responses. It's appeared that she's in way over her head for a long, long time. This latest performance only seemed to, once again, confirm that observation.

Her answers are vague and evasive. We're not too sure she could convince a college class, let alone anyone in government or the american people

Her statements came off as half-truths and veiled lies. She gets a no confidence vote.

Condi's a good piano player and figure skater. Maybe she should go back to those occupations as she obviously has NO TALENT in any government positon.

Condi is not really Secretary of State, because there is no longer a functioning State Department. Like every other Cabinet office, her role is merely to spout the party line. She has never, ever, shown any independence on any issue. She is a Bush-Cheney clone, another marionette, whose job is to hop from country to country, shake hands, look nice, but not accomplish anything.

One argument I've heard form teh apologists is "We had these 20K troops before, we're just going back to that level...

The United States of America doesn't need to take longshots like this. The vanity of Bush and his desire to prove that he was right is the driving force for US foreign policy right now

Why does anyone expect "truth" when this dick-tater stole his first election, computer manipulated his second, and has done nothing but lie since he's been in office? Bill Clinton was the last legally elected president, and it is time the American people recognized that they have allowed a criminal to run and ruin our once great nation.

She has nothing on her CV that qualifies her to be Secretary of State - especially in the so-called post 9/11 era.

Yes, she was Provost at Stanford University where she made certain there were adequate folding chairs for the parents of students atending graduation ceremonies, and Le Rice sits on a number of corporate boards doing God only knows what, but this sad woman has nothing in her background to qualify her to the Secretary of State.

The most bizarre thing is some on the far right think she's suited to run for president in 2008. I guess after George W. Bush, expectations are so low that Paris Hilton is qualified to be president now.

Condi as Prez!? What a horrible thought!
I hope 2007 is good for you and all of us.
I have been having computer problems and google problems lately and unable to leave comments. I hope this works!

Give her credit for that cool camouflage effect sweater though, she knew she was going into combat that day.

on a different note, all the best on sundance.
good vibes to you and your family.