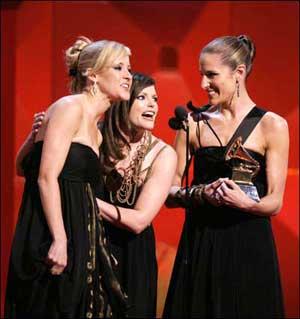 To quote Don Henley Sunday night as he announced another award for the Dixie Chicks, "Yeah!" Good for the girls! The Chicks, with their five-Grammy-winning album "Taking the Long Way," fired back a big fuck you to the Bush administration and bigots everywhere who vilified the group after lead singer Natalie Maines' harsh Iraq war criticism of President Bush back in March 2003. Maines had told audiences that "Just so you know, we're ashamed the president of the United States is from Texas." Well, back in 2003, some people actually still liked Bush, and called for boycotts and the ladies' heads. Funny what effect a few years has on the national pulse.

The Dixie Chicks--Maines, Martie Maguire and Emily Robison--took the Grammy in all five categories they were up for: record, song and album of the year; best country album; and best country performance by a group or duo.

The group's members were obviously quite moved by their tremendous vindication. "I think people are using their freedom of speech here tonight with all of these awards," Maines said. "We get the message. There's a lot of awesome music this year and fantastic performances. I'm very humbled. I think people were using their voice the same way this loudmouth did."

Robison acknowledged the stress the controversy placed on her family: "I think they're the ones who probably had it the hardest there for the last three years. I just wanted to recognize that we know what you went through."

Maguire said, ..."I think our core fans have always stayed true to us, and I want to thank them for staying with us. And we wouldn't have done this album without everything we went through, so we have no regrets."

Accepting their final award of the night, Maines thanked bandmates Robison and Martie Maguire for their support: "For the first time in my life, I'm speechless. Thank you Martie and Emily, for stickin' by me. I told you I'd take you to the Grammys. Stick with me. Thank you everyone. We are very, very appreciative and honored."

Success is the sweetest revenge. Here's to not just Maines' incredible artistic achievements, but her political prescience as well.


On another subject......we could use your help at The Adrienne Shelly Foundation, a non-profit organization dedicated in my wife's honor to help carry out her spirit and passion, with the goal of providing film school scholarships and grants to women filmmakers. As many of you know, Adrienne was brutally killed here in NYC on November 1st. Please visit our website to learn more about our mission and to make a donation. Every little contribution helps preserve Adrienne's legacy, and to help create something positive out of this horrible tragedy. Thank you.
Posted by The Ostroy Report at 6:07 PM

Three beautiful and superbly talented singers, song writers, and musicians and great Americans finally got their long-overdue recognition in all catagories. Hooray for the Dixie Chicks, and UP Yours to the bushies and bigoted morons everywhere!

As Gov. Dean so presciently said: "YEAAAGGGGHHHH!!!!" We're going to Washington, DC, to take back the White House! :-)))

It's so nice to see the Dixie Chicks vindicated by popular acclaim. Right-wing hate-radio, take that and shove it. Let's just hope that the war-mongering "Raynald of Chatillons" (Perle, Wolfowitz, Cheney et al.) will not be successful in provoking with Iran. Even as things stand it will take 1-2 decades to resolve the mess Bush has made of things.

Al Gore is probably the person best qualified to end this political nightmare and get us back on track. Al Gore, now!

This is what Democrats want to talk about?? The Dixie Clits?

Message to anonymous...why not, the repukes are busy slitting their own rhetorical throats so we might as well have some additional fun at their expense. Whimpering is so you. Waa, waa, waa! Yawn...

Would you rather talk about impeachment? Ok, you go first, we're all ears!

Why were the Chicks so late in slamming Dumbya? The rest of us have been doing it since he was Gobernator of Texas. Welcome to the party. haha

A total vindication for these wonderfully talented women and a complete repudiation of the Mofo from Midland.

Let's say your nickname for your Grandmother is Grammy. Then you'd use "Grammy's" to describe something that belongs to or is associated with her. Example: "I love Grammy's apple pie."

The rules really aren't difficult. Not following them makes you sound like, well, one of the rednecks who hates the Dixie Chicks and votes for W.

When did the grammy award become important to American politics, or life in general?? The libs on this website are really making a mountain out of a mole hill in this thread. Winning 5, or even 1 for that matter, doesn't mean anything about American politics. It only means a majority of the 'voting' members of The National Academy of Recording Arts & Sciences, Inc., voted for the winner of the award(s). Voting members are musicians, producers, and recording engineers.

wow...the dixie clits impressed a majority of a subset of musicians, producers, and recording engineers...and all they had to do was insult a President with low poll numbers...pretty impressive. A crazy lib might even declare this some sort of rebuke of the President, or the electorate, conservatives, religious people, ...

Anyone want to bet that people will remember 3 dixie clit songs in 10 years?

Dixie Clits? Hm, another wingnut who hates and fears women. What a surprise.

NO..."Grammies" is not the plural of Grammy, you pathetic repuglican nitwit! Unless you think the Grammy awards web site incorrectly refers to its own show...

Speaking of music..every time Bush farts his loyal base thinks its a symphony!

Anonymous said:
Winning 5, or even 1 for that matter, doesn't mean anything about American politics
========

Okay. True. But what does polls putting the pres at less than 30% approval ratings mean? What does the results of Nov 7 mean?

Get over it pal, America rejects you, your leaders and your values.

Anon, at the time the Chicks insulted the prez with the truth of their feelings, his polls weren't in the gutter. His lies and the media's licking his butt had gotten the Chicks booted off country radio and made them the recipients of death threats. That's why winning those Grammy's meant more than just a music industry moment. It was a message from an industry that once was blind, but now can see--and speak. The Chicks were brave and honest in a time of cowardice and lies, and for once, the world got to see it pay off.

The Grammy's are nothing but "just a music industry moment". Only 11% of the members of National Academy of Recording Arts & Sciences, Inc. are voting members of NARAS. You are also admitting that the content/quality of the dixie clits music is NOT what got them the award. The dixie clits got awards because now that the President's polling numbers are so low, the music industry is brave enough to come out from under their hollywood rock and jump on the popularity bandwagon. It's interesting that Ostroy has determined this topic to be worthy of blogging. What's next, American Idol updates on the OstroyReport?

HELP! I'm stuck under a sheet of Global Warming ice!!

I need Al Gore's help...some get him a private jet and a couple dozen black SUV's so he can come dig me out!!

Global warming causes WEATHER EXTREMES, which incudes what's happening this winter. I wonder what causes the Replubican's aversion to the truth?

you don't fear sex. never have, never will... not even that time when you may or may not have played a part in the murder of an innocent unborn baby for convenience. AIDS, again, nothing to fear.

you can't fear freedom...woot woot woot.... that's why you're ok with accepting responsibility for your actions. If you don't make the correct decisions, you don't believe the 'government' (tax paying people) should bail you out. You love freedom so much, that you think people who pay into social security should have the freedom to invest that money how they want to invest it.

you can't fear democracy, it's majority rule, right? most votes wins? The founding fathers would disagree. They feared democracy, ever hear of the federalist papers? By the way, the United States is NOT a democracy, it's a republic.

I can't respond to the fear of the dixie clits. This one, just cannot be comprehended.

The founding fathers feared democracy so much they put an obstacle in its way that we STILL haven't managed to remove: the Electoral College. Anything that can contradict the popular [read: REAL] vote and actually nullify it is a monstrosity and should have never been part of the system for "electing" presidents. Look at how it voided the will of the people in 2000. It contradicts everything we are raised on; in elementary school when you vote for "class president" who wins? Whoever gets the most votes. Doesn't matter which part of the class you sit in. If America ever wants to have a genuine democracy it needs to shitcan the undemocratic "Electoral College".

No one gives a rip about the grammy's or the oscars. People just watch other people act import, while realistically being irrelivant like all liberals are!

Fired back a big "Fuck you"? What the hell have you been smoking dickhead? The dixie cunts have lost MILLIONS in album sales, and you come up with some made up horseshit like that? Just because they won a politically correct award/grammy? LMMFAO! Dream on bed wetter.

That was their swan song.

Seriously speaking, the Grammy’s never reflected reality as far as music is concerned. The Dixie Chicks are old hat at this point and regardless of what they said in the past they’re not really offering anything new to the country music genre other than what might be a minor bump due to their political beliefs – in other words they will probably just get single CD sales but no noticeable jump in their limited fan base.

As for the rest of your comments they border on hate speech with your use of the word “redneck” and the assumptions that you presume. It's a bit ironic to since the Dixie Chick's will depend on a more liberal "redneck" fan base considering that they're still a C/W trio.

I will assume that you want to have a future in writing and over time you will mature enough to perhaps someday attain these goals. You might want to consider maturing your writing along the way.

As a Country Music fan I am truly surprised that they won anything in that genre. They had very little impact in Country Music this year. None of the local bands are playing their music at dances, no one is requesting their songs on the radio. I have a local DJ service and I do get requests for their older music (Earl, Tonight The Heartaches On Me, etc) but no request for their new songs. It is a very forgettable album and will not figure into any greatest hits albums they put out in the future.

If you wanted to get rid of either the Popular Vote or the Electoral College, there would be a lot more wisdom in eliminating the Popular Vote. It is the popular vote that is susceptible to fraud, and that fraud is perpetrated each and every time an election takes place....mostly by democrats filing in court to keep polls open longer, busing in voters who aren't registered, etc. Since we are not a "democracy" but a Republic, let's get rid of the fraud by eliminating the popular vote :-) As for the Dixie Chicks...do you really think their Grammys awarded by a mostly-liberal industry have any bearing on reality? That has about as much basis in fact as Global Warming....

All I can say is: