Hannity Still Hiding From Ostroy. Why is He So Afraid of an On-Air Debate? 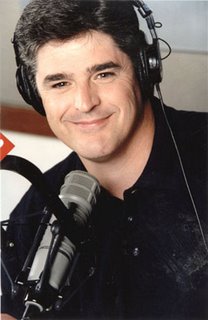 It's Day Three of "Sean Hannity Shows Just What a Coward He Really Is." Earlier in the week I was told that on his radio program Tuesday "The Hannitizer" berated me and ripped apart an ABCNEWS.com piece I wrote about Al Gore's likely 2008 presidential candidacy. All without me being there to confront him. The man who derives great pleasure from calling liberals "weak" and "cowards" is himself the biggest wuss of all. He'd rather bash someone on the air unchallenged than go head-to-head in debate and be outed in front of his audience as a fraud. He knows exactly how much he lies to them, and he refuses to have anyone on who'll use facts and the truth to skillfully and aggressively refute his GOP nonsense. Why else would he pair himself on television with Alan Colmes? Colmes couldn't win a fight against a bunch of Girl Scouts, for Pete's sake.

As I wrote Thursday, I called Hannity's producer, Jennie Lubart, and offered to go live with Sean. Haven't heard a peep. And I suspect I won't. Here's her contact info if you'd like to give her a shout and tell you'd like to see me get on the air her weak-kneed boss: (212) 301-5715, Jennie.Lubart@FOXNEWS.COM.

Stay tuned.
Posted by The Ostroy Report at 7:00 PM

Anyway, when's the last time he ever had a non-scripted discussion he didn't "fact-check" though Karl Rove? He doesn't discuss issues; he presents Karl Rove's faxes.

Ever wonder why he doesn’t have anyone with “other” views on his show? He's a'scared! Just the slightest morsel of data would blast his FOXist sophistry. I feel sorry for him when Bush/Rove is out , he won’t know what to talk about.

Also, you’re richer, cooler, and better looking (some people say, anyway) than he is. He’ll probably be too busy doing a puff interview of Ahmadinejad after Bush and Condi start telling us what a great guy he is.

Andy---this is Larry (the REAL Larry)---even if they did book you on the show, they will do with you exactly what they do with the 911 truth people. Ask you questions, give you 1.5 seconds to respond before Hannity interrupts and doesnt stop talking for the next 6 minutes straight, and then he'll keep saying "Answer my question!" and of course, he wont LET you answer because he'll be too busy running that Leo Strauss-loving fat trap of his---OR....they will put you on the show DEAD last with 2 minutes of the show remaining and they will take 1:30 of that time introducing you and the subject...another 10 seconds asking you a question and give you the last 20 seconds to actually answer. It's what FAUX News does best. They will have you on just so they can say they were "Fair and Balanced" and give you ZERO time to speak...while at the same time give a meaningless story about Anna Nicole 15 minutes or a 10 minute segment on Britney Spears' bald head---for the 5th straight night! FAUX News is total government controlled propaganda. They wouldnt know truth if it was hand-delivered by Jesus Christ himself!

Lets also remember CNN's deal with Saddam Hussein, where CNN would not report negative stories about Saddam and CNN gets to stay in Baghdad.

Larry,
Do you think its a little hypocritical of you to threaten to sue someone for libel and slander after you continually refer to Sean Hannity as a nazi? Can't you take a little of what you give out?

No, because Im not saying I AM Sean Hannity when I say it! I'm not POSING as him---am I? Why dont you try READING what I say?

Hannity would have a serious advantage over you, my friend. He lies with ease and makes up facts and you dont!!

Ostroy, keep your liberal-loving-fantasties going...so, if "Hollywood" loves Gore, the rest of the nation will too? Hollywood is fantasy land, we here in real america, live real lives, knowing the real dangers america faces and no...it's not our President Bush.

The Hollywood Community is the community that best reflects the spiritual, ethical and cherished values of our country. Almost all of them who are politically active have vast fortunes which they earned, not inheritied. Yet, despite their wealth, and unlike the rich Republicans, they fight for: help for the poor and the vanishing middle class; opporunitites for all, humane treatment for all the people in the world; and, the preservation of our Constitution and our Demoracy. They do not deal in "fantasy" but the hard facts that intellegence, compassion and truth are ndeed in abundance when our very lives and way of living are at risk.

"Hollywood reflects the spiritual, ethical, and cherished values of our country" ??

If the writer of the previous post is not a child, I'm willing to bet (s)he is a union member with a low paying job - if (s)he even has a job. People like the author of the previous post represent the exact reason why our Founding Fathers implemented the electoral system instead of popular vote - because most people are pure idiots.

If Hollywood cares so much about the vanishing middle class, I would like to know why they fly in private jets? Does the average American live in 20,000+ square foot houses? Name one member of the Hollywood Community who has decided to live on an average America salary for at least one month?

Does the middle class leave America to bash our country publically, then run back to the country and claim we were misquoted?

How many members of the Hollywood Community donated their Bush Tax Break instead of pocketing the money?

MARCH 9--A swanky California drug treatment facility claims that Courtney Love spent three months there in late-2005 and has since ignored demands to pay her outstanding $181,000 tab. In a Superior Court lawsuit, Beau Monde International charges that Love was treated at the firm's oceanfront Newport Beach property, a "boutique" rehab center that handles no more than five patients at a time. Beau Monde, according to its web site, offers spa and salon treatments, gourmet meals, poolside massages, and "luxurious fluffy robes and slippers." In the March 1 complaint, a copy of which you'll find below, Beau Monde alleges that Love, 42, paid $10,000 shortly after entering the facility in August 2005, but still owes it $181,286. The performer was ordered into rehab that month by a Los Angeles judge after she admitted violating her probation (which was imposed in connection with drug and assault pleas). Attached to the breach of contract lawsuit is a copy of Love's rehab bill, which includes "spa and other incidental costs" totaling about $36,000, and is addressed to Howard Weitzman, her criminal lawyer, and Warren Boyd, the singer's personal addiction counselor. Beau Monde's complaint also includes a copy of the facility's admissions agreement, which is in the name of "Courtney Love Cobain."

9:22 You Republicans are so literally minded and hence stupid that I fear your power in our government. When the writer said "Hollywood reflects ... " she/he obviously didn't mean every citizen in Hollywood leads an exemplary life. He/she meant that the political concern of the Hollywood community relfects the ideals of - may I say - Christianity and most worldwide religions - and the ideals of Demoracy. They do not have to wear sack cloth to do good and be concerned for others. The rich Republicans not only do not "give" anything to the poor, they do not evey work for the welfare of the poor or the middle class from their positions of power.

Hi Andy, First, let me express my condolences about your late wife, I truly am so sorry. I would also like to commend you on taking on that piece of shit named sean. If he is so smart and knowledgeable why isn't he advising the military on how to conduct this war? Because he doesn't know a fucking thing about the military and/or serving. Or how to organize a rifle company to take on a threat. He is all talk and no action. I am a former Marine and I can tell you he's another neocon coward. All set to sit on the sidelines but too afraid to put his money where his big gaping chasm of a mouth is. He's a pussy, plain and simple. A pussy. Hang Tough- Tap

Tap,
If it's true that you are a "former marine", then you would know that once a marine, always a marine. There is no such thing as a 'former' marine - unless you've been dishonorably discharged. So, what's up with you?

hollywood may love gore, but I assure you, so does much of the world. the only people who seem to disagree with gore are influenced by the gop smear machine. people who are labeled "liberal" wacko's have, by and large, the same view on the issues of plame, gore, global warming and iraq as chinese communists, european conservatives, south american socialists and middle-eastern muslims. the american right wing is the delusional pond in the middle of a common-sense ocean.

Sean Hannity is the most foul individual on the planet. He is even more disgusting than Ann Coulter.