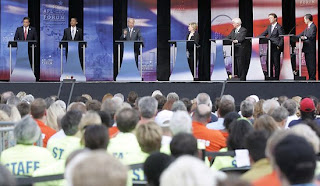 Where is it written that a politician must constantly yell in order to appear smart, forceful and presidential? Watching the Democrats' debate in Chicago this week gave me one giant liberal headache. With the exception of John Edwards, Barack Obama and Bill Richardson, who's so laid back he's almost comatose, the other Dems clearly believe that America likes voting for screamers (how quickly they forget Howard Dean).

While I still think NY Sen. Hillary Clinton's star continues to rise, there were moments she was so shrill my dogs ran away. Even worse, she sounds like my mom 33 years ago screaming at me to clean my room.

Connecticut Sen. Chris Dodd comes off as very serious, extremely fast-talking, loud, crusty and very agitated. Have you ever been in a small, locked public restroom and some guy has to go really, really badly and angrily bangs on the door barking "Jesus, C'mon already, let's go pal, get out of there..."? Well, to me, that's how Dodd looks and sounds all the time.

Delaware Sen. Joe Biden is also a screamer. Can't seem to say anything unless he's pounding the podium, yelling and angrily pointing his finger at no one in particular (usually as he's reminding us of just how darned wonderful he is).

New Mexico Gov. Bill Richardson, aside from clearly needing a chug of Jolt Cola, mostly looks constipated. A great guy (who I've met and was charmed by) with killer cred, but unless he hooks himself up to some jumper cables soon he's going back to New Mexico fast.

John Edwards is a really bright guy with some awesome policy positions, in particular relating to health care. But, as a Jew, there's just something about the sound of a screaming Southerner that curls the hair on the back of my neck. Call me crazy.

Illinois' Sen. Obama spent much of the night being attacked by everyone else, in particular for his recent and controversial statement about negotiating unilaterally with rogue nations. He was on the ropes at times, and it wasn't pretty. He's got no real foreign policy experience, and it showed. He raises his voice every so often, but he's very likable. He's inspiring, charismatic and when he speaks he reminds a lot of people of JFK. He knows how to play to the audience in a manner that's not annoying. He comes off as sincere, in that rare Bill Clinton way. I just don't think he's got the real chops to be president, but I do like his style. And he ducked that Barry Bonds question like a real pro.

Lastly, Ohio Rep. Dennis Kucinich apparently studies the Howard Dean speech tapes. He's not just a screamer, he comes off as a crazy screamer. He yells, he flails his arms, he grins widely, flashing those big teeth and ears...he's like the crazy uncle you hide from at family picnics. Does he really expect to get elected with this nutty routine? But give him credit. He did have the best quip of the night. In response to the question about China being an ally or an adversary: "There was a myth when I was growing up in Cleveland that if you dug a hole deep enough you'd get to China. We're there." Huge laugh followed. I think Edwards laughed the hardest. Kucinich may not be very presidential, but he's a helluva funny little guy.

All kidding aside, everyone who was on that stage is bright, passionate and highly capable. Each and every one of them would be a 1000% better president and commander-in-chief than George Bush. But in the end, overall, I thought Hillary took the prize again, beating the pack handily. Is it me or is she getting cuter and more charming over time? Gotta love that "I'm your girl" soundbite. She really knows how to work the stage and whip the pants off the competition. And then she flashes that shit-eating killer smile as if to say, "That's right boys, I just whipped the pants off ya..."
Posted by The Ostroy Report at 9:32 PM

As much as I like Hillary, I think she is being pushed by the right including money donations. Why? They figure they have the best change to beat her. Rumor has it they are going to launch a huge smear on Bill Clinton to bring her down.

Remember this is the crowd that will do anything to stay in power.

Someone once said that if you want people to pay attention to what you say, speak in a whisper, or at least in a low voice. That same someone should remind the Dem candidates that louder isn't necessarily better, because it just makes them look frantic, desperate, and unable to keep a cool composure. Don't they have handlers or media consultants who could remind them of this?

Perhaps it is because of the location of many of these debates. There seems to be an echo.

Your wondering about Kucinich's being presidential material or not makes me think of the vast numbers of people who are still at the level of "Is he tall and good-looking enough?"

And as for the ability of the man and what he is offering to do for America should he become president, what has THAT got to do with anything?

I agree with you that any of the
Democratic candidates is 1,000% better than the president we have
now. I also believe that Kucinich
should be given a real fair chance
in OUR OWN minds.

My vote goes to whoever wins the
Democratic primary. I hope s/he
will have more of a backbone than
some of our present leaders in
Congress. Whatever happened to
people like Sam Erwin and Fullbright? We don't see the likes of them anymore.

Andy,
What's with the Clintons always knowing how to "whip the pants off the competition" (your quote) ? Do you think Hillary will be raping interns too ?

Gore Says He May Re-enter Politics

Is he slowly inching toward an announcement?

I'm stunned that Hillary is still in the lead. Her comment "I'm your girl" and her use of "When I'm your president" are both silly and annoying attempts at -- I'm not sure what. Is it postivie thinking and THE SECRET that's she's practicing? The use of "girl" is perjorative after one becomes twenty-five. Who would dare call Obama "boy"? We fought that battle years ago.

Not only that, she seldom gives a straight answer; and she does threat us like children who shouldn't know what the "adults" are thinking.

And just as it was wrong for most Americans to elect Bush because he was "cute", down-to-earth and seemed like a good guy to drink beer with, it would be wrong to elect Hillary for her smile,(if that turns you on), her debating skills or anyother attribute but the right ideas and programs that would restore America; and the intelligence and strengh of character to excecute them. She hasn't even acknowledged her vote for the war was wrong. And I cringe when she mentions her fifteen years experience taking on the right wing. How --she didn't invite them to White House dinners?

Edwards is the only candidate among the Democrats who could possibly be a great president. His ideas are dramatically in favor of the average American, as were Roosevelt's. And, the country is probably as bad off now as it was when FDR was president.