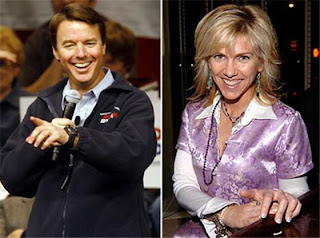 About a month ago former North Carolina Senator and once presidential hopeful John Edwards issued his own version of "I did not have sex with that woman." Only this time, instead of Bill Clinton's angry, finger-pointing delivery what we got from Plastic Ken was a smarmy, half-smirked, squinty-eyed look of incredulousness and mock indignation as if the reporter had just asked him the dumbest fucking question on Earth. 'What, me cheat? How dare you!'?

His denial was unequivocal, almost to the point of challenging, especially when he referred to the allegations as "tabloid trash." Probably not the smartest strategy when you happen to have an already zealous National Enquirer up your ass, feverishly gnawing away as it obsesses over proving its journalistic legitimacy. A dumb move indeed. Sort of like former Sen. Gary Hart's boneheaded challenge to the scandal-starved media back in 1987: "Follow me around. I don't care. I'm serious. If anybody wants to put a tail on me, go ahead. They'll be very bored." And follow him they did, right into his mistress Donna Rice's arms.

Cut to a month later, with Plastic Ken finally admitting last week to the rest of us what he claims to have confessed to his wife Elizabeth back in 2006: that he had a "liaison" with novice filmmmaker and 80's party girl Rielle Hunter. But wait, the affair took place while Elizabeth's incurable cancer "was in remission." Good thing. Its not like she was in chemo or anything. That would've been unconscionable. See? Plastic Ken does have a conscience after all.

Now in this same admission last week Plastic Ken, who chalks up his sexual indiscretions to unbridled narcissism, flatly denied that he's the father of Hunter's six month old baby. So let's get this straight: Edwards is unequivocally denying something else?. George W. Bush had it right when he so aptly said: "...Fool me once, shame on — shame on you. Fool me — you can't get fooled again." Exactly. No one believed Plastic Ken a month ago and we sure as hell don't believe him now. That he's volunteered to take a paternity test is not enough. I want him on "Maury" for one of those patented "Who's Your Baby Daddy" shows. I want all of America on the edge of their seats as Maury tears open the big manila envelope and declares, "Plastic Ken...you ARE the father!" as the publicly humiliated Baby Daddy runs offstage in tears as Elizabeth and Rielle high-five each other and curse him out on national television. That would be most fitting.

To be sure, marital infidelity is rampant in Washington, and Plastic Ken isn't the first and surely won't be the last to let his roving shmecky out of his pants. He's in good company with other fellow self-destructive narcissists such as Hart, Clinton, John McCain, Newt Gingrich, Henry Hyde, Larry Craig, Bob Barr, Bob Livingston, David Vitter, Jim McGreevey and Elliot Spitzer. But what is it about these extra-special dirtbags--Edwards, Gingrich, McCain to name a few--who are not only compelled to betray their wives, but allegedly do so while these poor women are battling some sort of dreaded illness or debilitating physical condition? They reside on the bottom of the philanderers food chain. Yet that doesn't stop them from sanctimoniously lecturing the rest of us about morality and decency. While running for president last Fall Plastic Ken said, "...We are facing a moral crisis as great as any that has ever challenged us. And, it is this test -- this moral test -- that I have come to understand is at the heart of this campaign." ("now if you'll please excuse me, I have to go boink Rielle before Elizabeth's cancer returns"). It's enought to make you sick.
Posted by The Ostroy Report at 1:53 PM

It's even worse. John was caught in Rielle's hotel several weeks ago so it is not over. The Inquirer editor said they would publish these pictures soon. Not only that, she says they plan to get married, which means they're both "biding their time" until Elizabeth dies. This is really disgusting. Since she's 42 they couldn't wait until their marriage to start John's new family Rielle had a baby before it was too late for them.

There's also the mystery of the source of the huge amount of money which has paid for her upkeep and her living in "millionaire-mansions."

But the worse aspect of this "liason" is the death-watch by John and Rielle, until Elizabeth dies so they can then be married, if this part of the story being told is true.
What a couple.

I read a medical article that said an excess of estrogen could cause cancer, so it could be that the fertility program Elizabeth went through to have more children could have caused her current cancer. I'm sure to pursue that program was a decision made by both of them. Only speculation of course but a distrubing consideration.

Hold on. You might want to get some perspecive on this. Read Larisa Alexandrovna's post on HuffPo: http://www.huffingtonpost.com/larisa-alexandrovna/the-passengers-gossip-as_b_117904.html

Alexandrovna is as out of touch with reality as Edwards was. Of course she's correct in saying that anybody's sex life is nobody else's business; and sex between two consenting adults is not a crime. The reality of what is, trumps what should be. (Racism, except as restricted by law, is not illegal but it exists and we all have to deal with it.)

As Ostroy pointed out, the reputations and careers were damaged by prominent men who sufferend the consequences of their sexual behavior in a country where such activities are observed and judged. Look at the list Ostroy gave us. A president was impeached for a sexual encounter.

So at the least John Edwards showed an idiotic lack of good judgment; and, then he lied in the coverup. He actually ran for president and risked the future of the country by taking the chance that he would be the nominee and then have to face this. No argument that he had not behaved illegally would have saved the election for him. He was not only stupid, he selfishly disregarded the effect of discovery on the country.

Then when you add to that, the lies; the pain this has caused his dying wife; and, the suspicion about the money spent on the mistress, it becomes our right to know because of his political possibilites. He could have been the Democratic vice president or appointed Attorney General. Those who wish can ignore his adultery but as citizens we have to consider his intelligence, his honesty and his mind-set.

We need to find out everything we can about the two candidates and hope there's nothing yet to be revealed.

Shakespeare said it in the most memorable way: "hoist with his own petard." Maybe Edwards will think twice before offering gratuituous lectures on morality again!

Get over it, it's just sex. Make prostitution legal and we won't have these problems.

So far Tom is the only sexist responding to this story. The others who usually have a response to Ostroy's comments, are remaining silent. Just as well. We had enough of them during Hillary's campaign.

Sorry, I'll agree with Tom, It was ONLY sex between two adults. This country is so hung up over sexual issues it's hard to believe we can be called a free country.

The nano second slip of a nipple on TV was a major issue. You would have thought something terrible had happened, a male can show his nipples and nothing ever is said.

Two considerations: Sex would not be a problem if Edwards had been "John Doe". However, he was running for the presidency of the USA and he was too stupid to keep his zipper closed until at least the campagaingn was over and he'd won, or not.

Second: Showing a male nipple is no big deal because every woman seeing it is not going to "get a hard on" and go rape a man.

Seeing a females nipple is not going to make a male want to "rape" her. That was a stupid remark.

It depends on the "tit", not the male. Thus some women have considered breast implementation?

Since "Thou shalt not commit adultery" doesn't do it for some males, maybe ir's a vocabulary problem. Would it be clearer if the churches taught "Thou shalt not unzip thou zipper for sex out of wedlock?"

Who cares? Everybody is doing it --"Boys will be boys." Get over it.

Except of course there's one more child in a single parent home; another mother left to raise her kid alone; money from either welfare, two jobs by the mother; or, in this case money from who knows where. Not to mention the emotional anguish and consequent harm to the mother of the child, the emotiional pain and humiliation of the spounse and her children; and the new infant without a father.

All that seems to be inconsequential as long as the man gets his sexual and ego gratification.

And, again, of course, it truly does seem "everybody's doing it."

Out of appreciation for his support, Obama should sit Edwards down and give him the lecture that he gave to black men about family responsibility. The lecture that so angered Jackson, who has had his moral lapses, too.

Or maybe Edwards heard the lecture and thought it just applied to the poor blacks and whites he once said he was so anxious to help.

Perhaps the divide in the country is not racial but economical.

Hillary would be running for President right now if the truth about Edwards was available to voters during the Primaries.

Edwards strategy is to blink a lot and try to look cute.

1:18 is right about Hillary - not only would she be running she would be the next president. It would have also helped her if the sexists had keep their misogyny to themselves like they're now being silent in defense of Edwards. No outrage among those sexist men.

Now Obama is promising a tax free life to seniors ?!?!

Seniors most likely have no mortgage, they have no kids in college, they get medicare and social security, they get senior discounts for everything, and so on and so forth

Who is supposed to pay for all the breaks that Obama is giving to young and poor and old and rich ? Obama is pushing the entire burden of this country on the working class that are about to start paying for all the baby boomers that are starting to retire.

Obama is a pandering pile of crap.

We could have had Hillary if Edwards wasn't such a lying bastard.

To the Youth of America:
If you vote for Obama, you are voting your life away

Who is "we", Tonto, and didn't your Mother tell you not to lie - especially to young people?

10:00 Don't worry and 12:02 don't count on it. Obama might/could/probably will flip-flop and join the Republicans because he has done so in the past. He cannot be trusted to keep his promises so we can't believe anything he says.

What if the future held Obama and Edwards as vp. At least we have hard evidence about one of them.

Being for legal prostitution isn't "sexist", it's "liberal".

Then "liberal" is "sexist".

When did the illegality of prostitution stop any of the hordes of immature males without sublimation skills and sex addicts?

Who is "we"? Do you speak for some mindless Borg collective?

Must be sad to be preoccupied with hypotheticals and have them drive your decisions. How do you get anything done or trust anyone?

5:05 seems obvious: the "we" is always the group or pair being talked about. Duh.