For the GOP, Blagojevich is the New Ayers 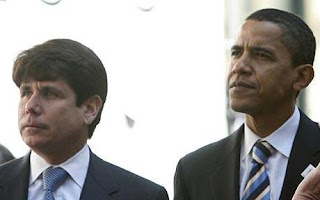 The statement Wednesday from RNC Chairman Mike Duncan made it crystal clear that conservatives are going to do everything in their power to connect President-elect Barack Obama to embattled Illinois Gov. Rod Blagojevich and the "pay for play" corruption scandal centered on his attempts to sell Obama's vacated Senate seat:

"President-elect Barack Obama's carefully parsed and vague statements regarding his own contact and that of his team with Governor Rod Blagojevich are unacceptable. Considering the severity of the allegations against Governor Blagojevich, the President-elect should immediately disclose any and all communications his transition team has had with the governor's office along with any Service Employees International Union (SEIU) officials involved in the matter. Obama's promise of transparency to the American people is now being tested."

Watch out Democrats, as we're about to witness the morphing of former 60's radical William Ayers--the GOP's hand-picked poster-child for Obama's alleged "radicalism"--into the crooked Blagojevich. And we're likely to hear the name Tony Rezko again. A lot. The indicted Chicago real estate developer and former Obama supporter is also embroiled in this new scandal including allegations that he paid for an addition on the Governor's home. During the election, Rezko was used as another pawn in the GOP's Obama witch-hunt.

But here's a big message to Republicans: you lost. Get over it. Clearly, voters rejected the GOP's campaign mudslinging, and it's utterly pointless, and quite frankly embarrassing, to start that nonsense up all over again. Let me repeat myself: Barack Obama won the election and in just about six more weeks he will become the 44th president of the United States. That's not gonna change. So to try now to clip Obama to Blagojevich's dirty coattails is a supreme lesson in futility, and an indication that Duncan, the RNC, the GOP and the conservative talking-heads apparently have learned little since November 4.

One thing's certain: Obama should not in any way, shape or form dignify the politically-suspect statements or challenges from Duncan or anyone else which shamelessly attempt to drag him into this mind-boggling shitstorm.


On another subject, we could use your help at the Adrienne Shelly Foundation. Our mission is to support women filmmakers. Click here to make a contribution. To learn more about us and to make a tax-deductible donation, please visit our website. Every contribution helps preserve Adrienne's legacy, allows us to help others, and creates something positive out of the tragic loss two years ago of an incredibly loving and talented woman.
Posted by The Ostroy Report at 9:35 PM

What's up with his hair? A 50 mph wind wouldn't move it. Every time I saw him on MSNBC last night I was like OMG!

I find it interesting that you attack Republicans and use only one word in your post to describe Blagojevich (Democrat) trying to get paid to fill Obama's Senate seat.

How did Blagojevich know that Obama would only give him appreciation for appointing his choice for senator if he hadn't been in touch with Obama or his team? And, if Obama, or someone on his team knew it was "pay to play" wasn't it a legal requirement for that someone to report it to the authorities? Or was it, in fact, Obama who exposed the Governor? We should have more information.

How did Blagojevich know that Obama would only give him appreciation for appointing his choice for senator if he hadn't been in touch with Obama or his team? And, if Obama, or someone on his team knew it was "pay to play" wasn't it a legal requirement for that someone to report it to the authorities? Or was it, in fact, Obama who exposed the Governor? We should have more information.

Get over it, you lost?

How about it if Republicans greeted O'Clinton, er Obama the way Dems treated Bush?

From DAY ONE, Dems treated him like crap even as he reached out to leftists like Ted Kennedy.

You never got over that loss and YES it was a real loss - Bush won Florida fair and square and the totals would have been higher if the Leftist Media didn't call Florida for Gore when the conservative western pan-handle was still voting.

Indeed, that early and biased call is the real reason for any of the hullaballoo as the margin would have been even wider. What's more, states in the central, western and mountain time zones would have turned out a higher Bush vote and he would have had the popular vote as well.

You all treated Bush like crap and now you want a honeymoon for this guy? What are you smoking?

Ayers was never an issue about O'Clinton being an activist/terrorist. It was about the fact that his values were so low that it didn't matter who he sucked up to in his effort to gain power.

In that regard there is little difference between Ayers and Wright and Blago etc.

These are dirt bags and they are close to O'Clinton. O'Clinton endorsed Blago in 06 long after it was clear that Blago was dirty.

It's all about what kind of person you are.

And while we are on it, hopefully Mr. Rezko, in the midst of his singing, can sing a little about that corrupt house deal, where the appraisal on the land his wife bought was inappropriately jacked up even as the value of the house was jacked down.

My bet is O'Clinton, in effect, accepted a bribe from Rezko.

When Republicans lose, they sulk and pout like spoiled children.
When Democrats lose, Republicans are telling them to get over it.
Hypocritical? You bet!

There are now audio recordings of Obama's Chief-of-Staff talking to Blagojevich about who might be filling Obama's Senate seat.

Now just imagine Bush's Chief-of-Staff was talking to a Republican Governor who was trying sell a Senate position to the highest bidder. What would old Ostroy say about Bush in this situation ?

Hasn't Obama said "I did not have pay and play with that man?

Democrats are all a bunch of socialist morons... Thanks Barney Frank for the housing meltdown. Thanks Bill Clinton for selling the white house and passing NAFTA so all our manufacturing jobs could go to Mexico and China. Thanks Al Gore for showing us how to be a two faced creep with all your global warming BS! Oh yeah, Thanks Obama for renting a 767 (that holds over 200 people)to fly just himself and his family to Hawaii for Vacation... I wonder if Al Gore spotted him some carbon credits for his trip... Wake up idiots!! I guess after reading this Andy you wont post it.. Lefty’s don't like criticism. They just like to give it!!