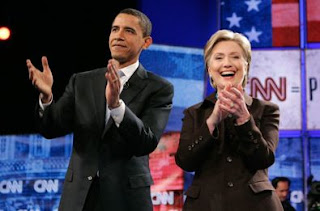 Politics surely makes for strange bedfellows. President-elect Barack Obama will officially announce on Monday his choice of New York Senator Hillary Clinton as his Secretary of State, a position that will make her the nation's, and the world's, top diplomat. It's an appointment that for some comes as no surprise, as some sort of Obama/Clinton marriage always seemed inevitable. But to others, this decision is sure to be truly unfathomable.

Just turn the clock back to early Spring, when the cries of "Hillary Should Quit!" first rang out. Do we remember how relentlessly Hillary was vilified for the next several months as nothing short of the anti-Christ by the legions of rabid Obama supporters who's overall sense of entitlement after a string of early primary and caucus wins left them anointing their candidate the rightful heir to the presidency?

I can't tell you how many emotionally-heated verbal slugfests I had with decades-old friends who argued that Clinton was not just ripping the campaign apart and ruining Obama's chances for winning in November, but was singlehandedly destroying the Democratic Party for generations to come. How dare this women stay in the race and create such political heresy, they shouted. But the winds of change swept through the election and Clinton was winning the big contests and gaining momentum, while Obama was losing steam. Bravely, despite the endless barrage of angry, derisive calls for her early departure from the race, Clinton pressed on right down to the very end, amassing a booty of 18-million supporters.

Cut to November 4th, the day Sen. Barack Obama created history by becoming the nation's first Black president, doing so in an electoral college landslide. Obama was also the first Democrat in decades to win traditionally red states such as Virginia, Indiana and North Carolina. His masterful campaign--perhaps the best-run presidential campaign in U.S. history--pulled together an impressive coalition of the young, old, white, black, Hispanic, male, female, catholics, Jews, affluent and the heretofore elusive "white working class." So much for the anti-Christ.

What a fairy tale indeed. Obama ended up not just winning, but trouncing his opponent, Sen. John McCain. And a month later, Hillary Clinton, his arch-nemesis and Judas-incarnate, was bestowed with the Secretary of State portfolio. And Hill's man Bubba's even agreed to play nice as well, restricting his various speaking, travel and financial/fundraising activities. It's just one big happy family now.

The moral of this story? As Yogi Berra famously said, "It ain't over till it's over." And in the case of Obama and Clinton, it wasn't even over when it was over.
Posted by The Ostroy Report at 7:18 AM

Obama is one smart politician. Hillary will make an excellent Secretary of State.

The change is coming in the form of Obmama's leadership as he so expertly stated.

It just drives the Republicans nuts to see Barack put together a team that will actually get something done. Looking back it was a GREAT pick to have Hillary as SOS rather than VP. She'll be able to use her talents to get things done and will prove to be the best Secretary of State ever. She is in very good with the President of Pakistan so that will be very important with this past weeks problems in India.

I just can't wait for the 20th when this team will hit the floor running.

If I had, as I almost did, vote for Obama in the general election, I'd be slitting my throat right about now.

One of the things that attracted me to vote for Obama in the primary was that it was, as he said, time to turn the page on the Clinton years.

Now it looks like 75% or so of the team he has assembled comes from the Clinton administration, including Hillary herself.

I've heard all this nonsense about how the Clinton administration is the only one from which a Democrat can draw experience from. It is NONSENSE.

First of all, because it presumes that Obama knowingly misled people when he made the comment time and again about how we had to turn the page on the Clinton era.

Secondly, because it beggars the imagination to think that in a nation of more than 300 million people, he can't fill out his roster with a ratio of Clintons to non-Clintons that is the reverse of what it turned out to be.

It also highlights a problem I have with my Democratic Party. Time and again, our leaders kick us in the nuts and we just sit there and take it, apparently because we so crave having control of the White House regardless of what it's being used for.

Now Obama has lied his heart out to gain the office and even before assuming it is throwing his promises out the door. The reversal of the Bush tax cuts? Off the page. Clintonites popping up everywhere. No page turning. Even a dirtbag like Eric Holder who accommodated the Rich pardon would be easy to say no to. But noooooooooooooooo.....

When the first Bush gave up his promise about Read My Lips on taxes, his base abandonned him.

But we Democrats never seem to be able to hold our leaders to their word or their pronounced principles.

It was all clear before the election what Obama would do. He'd already flipped on promises and as was poined out on this blog,The NY Times wrote a front page piece long before the campaign that Obama's way of governing was to get the two sides to talk, then if necessary in order to reach an agreement, submit to the opposition side.

I was for Hillary and I'm delighted that she's the SOS, but dismayed at what to expect from Obama

It was all clear before the election what Obama would do. He'd already flipped on promises and as was poined out on this blog,The NY Times wrote a front page piece long before the campaign that Obama's way of governing was to get the two sides to talk, then if necessary in order to reach an agreement, submit to the opposition side.

I was for Hillary and I'm delighted that she's the SOS, but dismayed at what to expect from Obama

After reading some of the negative comments about Obama by people who seem to be Democrats, I can either assume they are Republicans masquerading as Democrats or illustrations of the reasons why Democrats generally get the crap kicked out of them year after year. Constant whining and undermining the party and any policy that does not satisfy their ideological purity. Get a life you folks! You can bet the Republicans work together but as is sadly typical of Democrats, when we meet something we dont like we circle the wagons ..and start shooting at each other!

Look at the pitiful record of elections we have won over the last 30 years and think of what our chances are of holding on to the Senate and House in two years and re-electing Obama if all you do is complain and bicker.

That is why we lost in 2000. Do you think we are better or worse off for the divisions that cost us the election then and enabled Bush to rule for eight long and disastrous years? Do you want a repeat performance? If you do, just keep up the bitching!

President-elect Obama made a superior choice for Secretary of State! Sen. Clinton is an intelligent, forceful, engaging person who will represent our interests superbly! Although I didn't vote for her in the primary, I think she had every right to pursue the nomination and would have made an outstanding candidate whom I would have gladly supported had she won the noination. What I fail to understand is this irrational hatred she seems to inspire in people who should know better.

2"05 If the Democratic politicans listened to the criticism from devoted Democrats, many of whom post on this blog, more Democrats would get elected more often.

As for your praise for the Republicans -- it seems to mean they were clearly divided on John McCain and did not unite behind him.