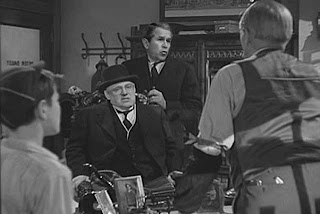 And he ought to know. He's the toughest, meanest, dirtiest, nastiest most evil person to ever hit Washington.
Posted by The Ostroy Report at 7:49 AM

Mr. Cheney would serve us all and himself that taking a pill and retiring out of public view. It will take our country years to overcome the stewardship of the Bush-Cheney years.

Cheney has been Mr. Potter long b/f the wheel chair - the wheels just complete the image of the eveil, warped, sour, powerful misanthrope. The only goods news is that he is nothing more than a malicious spectator now.

What ever happened to the $7000 that Potter took at the bank, by the way?

Democrats blamed Bush for not stopping 9/11 8 months into his first term.

Democrats point to a generic Aug 6 PDB that didn't contain anything close to specific information that could have helped prevent 9/11 and they blame Bush for not stopping 9/11.

Democrats ignored the 8 years of attacks by Al Qaeda during the Clinton years and claimed that 9/11 was not Clinton's fault because it happened on Bush's watch.

The table has turned

We are now on Obama's watch. Don't try to blame Bush unless you are willing to put some of the 9/11 blame on Clinton.

Guess what: They are ALL dicks.

I have lost all hope.

If we can't try this person (and I use the term loosely) for the crimes he has committed, then can we at least take away the taxpayer funded health care which keeps him alive? Speed him along to the reckoning which awaits him on the other side.

Old Duck Cheney is one tough old TALKING bird. He and the rest of the bush neoCLOWNS were pretty good scaring the old ladies and kiddies on the home front while waving the flags behind the wives or Momma's skirts.

It's a shame that they didn't put their big, badass talking butts on the line with the paratroopers and marines during Nam and take their chances.

Nuff said about the "Fortunate Son's" of a Bitches

Tell me anonymous 12:36----how did Bush know he was safe in that Sarasota school on 9/11? Im not talking about conspiracies here---I'm talking strictly about FACTS--and the FACT is that Bush, on 9/11, after hearing from Andy Card "we are under attack" sat there for another 7 minutes and stayed in the school another 45 minutes, even delivering a speech from it.

It was reported soon after the 2nd tower was hit that possibly 200 planes were hijacked. Dick Cheney told Tim Russert on 9-16-01 on Meet the Press that the FAA had direct lines with the secret service and then stopped himself from saying anymore. If the FAA had direct lines with the secret service, then the secret service would have known that 200 possible planes were being hijacked--and if thats the case, then why didnt they get Bush the HELL out of that school since ANY of these possible 200 planes could have easily departed from the Sarasota airport (since the school Bush was in was only minutes from the airport)?

If it was VERY possible that a hijacked plane could have easily crashed into the school where Bush was (which it could have) why did Bush not only STAY in the school (endangering his life and his staff, but also endangering the lives of all the kids and the school faculty)?

Even if Bush may not have known the ifs, the whens, the hows and the whys of that day---he DEFINATELY knew at least ONE thing---he knew he was safe in the school from a hijacked plane nosediving into it. And the secret service was COMPLETELY derelict in their duty of not rushing Bush to a safe location (since we were being attcked from the air).

Then, after knowing we were being attacked from the air, Bush and his staff hop aboard Air Force One and take off WITHOUT any fighter jets accompanying the plane! When Andy Card whispered "we are under attack" in Bush's ear, Bush didnt even bother to ask "Who is attacking us?" or ask ANY other questions or requested NO information. Bush KNEW he was safe that day---no doubt about it. NONE of what I said is a conspiracy theory---everything I said is FACT.

"no, doctor, he may look like a Matt, but in the end HE WILL BE A DICK"

Cheney's voice has become unhuman. Not of this world. But somehow it fits with his words.

Surely Cheney is man enough to voluntarily be waterboarded for, say, 45 minutes on live television. Then he can tell us whether it's torture or merely 'enhanced' interrogation.

last nite keith told dick to just leave the country. i would say,
the justice department better grab his passport, and the treasury dept his bank accounts (at least those they can find) this f$%^er has a palm island in dubai with his name on it - right next to the bush's...........

They're all a bunch of sore losers. Why do the GOP/ReTHUGlicans ruin everything they get their hands on?
I wish I could tell each and every one of them "Don't go away mad, JUST GO AWAY."
Or how about the line from the movie "Network where Howard Beale says, "I'm mad as hell, and I'm not going to take it anymore."

Repubs are like locust that destroy everything in their past. Hey Cheney where are those WMDs you insisted were in Iraq? I know you and the rest of your bunch dont believe in American democracy and that is why you imprison without trial, torture, lie us into war and spread nasty rumors and hate.
Terrorist attack on US? Maybe so but the last time we were warned of such an attack Bush did nothing and went on vacation! That terrorist attack used for political purposes and I am sure you and your kind are just hoping for another to gain back the power you lost by your recklessness.