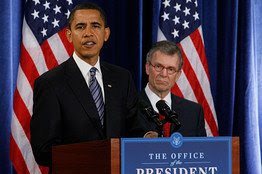 Let's face it, there's plenty of folks who can fill Daschle's post. He's an extraneous piece of the Obama puzzle. He's simply not worth the fight; not worth the potential damage to Obama's reputation. Unlike Geithner, who's former role as head of the New York Fed makes him supremely qualified to help steer the nation through this deep economic and banking crisis, Daschle is expendable. Now don't get me wrong: I'm not justifying Geithner's appointment because he is "uniquely qualified.". The point is, if Obama wants to score points with voters and immediately shift the PR momentum, he can do so and still end up with the guy he really needs by casting off the one he doesn't. It's a smart political move.
Posted by The Ostroy Report at 8:21 AM

I disagree. He is the best for the job.

I could not agree more that Daschle should be passed by for any post in Obama's administration. Good character is more important that "uniquely qualified" unless the job's main requiraeent is the skill or propensity to steal. In fact, one of the smartest, therefore most "uniquely qualified" for "deep thinking" is Madoff. Give him a pardon and let him apply his high intelligence to a resonsible job with Obama's team if honesty has no merit.

Not only that, even when Daschle was in the Senate he was a "Republican light" and "caved" more times than not.

Is it that we should not be surprised at Obama's priorities, in light of his friends and associates in Chicago? Ethics/good character does not seem high on his list as a qualification for association.

I praised him for his stated position on lobbyists.

His first 2 weeks are really turning me off. He has allowed 2 lobbyists into his administration in direct conflict with his stated position on lobbyists.

To quote Tom Daschle (1998), "Make no mistake, tax cheaters cheat us all, and the IRS should enforce our laws to the letter."

An honest person knows that Tom Daschle and Tim Geithner did not make honest mistakes with their taxes. These guys tried to get away with something. I ask anybody that challenges me on this to state whether or not they'd give Rush Limbaugh or Sean Hannity the same leeway for error if the names of the tax cheats were different.

If Obama continues this trend I, for one, will be forced to lean against everything the Obama administration does during his term.

At this point I think Obama should make a gesture of good will and subject everyone in his administration to a tax audit.

In a general sense he is especially well qualified for this govenment post. Yet he is not the only qualified person to fill it.
From what I've read so far, this is not a clear case of tax evasion, rather the constant manipulation of our tax laws by the asset endowed to not pay a fair share of the communal tax debt.
We are all in this until we demand tax equality through open and equitable tax reform.

What I'd like to demand and get is "equaltiy" in the penalty for not paying taxes. I am "responsible" for any "honest mistake" my professional CPA might make. It seems, however, those in power are able to get away with it unless they happen to get a political appointment and their "theft" will be discovered.

Please -- equality in the enforcement of the law of the land.

I agree with you completely. There are a number of people who can do the health job but I disagree with you on Geithner. I think there were others who could do his job at treasury.

If Daschle didn't know he owed taxes and didn't have the intelligence to check it out, he is not smart enough to handle a responsible and difficult appointment in the administration. He should not be confirmed - he's either a crook or he is slow-witted.

What this all shows is that Obama is not what he claimed to be.

He was against earmarks, and that bill his friends wrote is filled with pork that are earmarks or close enough to it.

He was against lobbyists, but Daschle was a lobbyist, his wife still is and the guy has tax problems to boot.

He is a fraud, but he smiles nice and says what people want to hear.

His biggest mistake was to allow this pork laden stimulus bill to be written solely by his own side.

This is the economic equivalent of a WAR and partisan politics should have nothing to do with things. Roosevelt put the former GOP VP in his cabinet and a GOP guy as his war secretary. He made a deal with Willkie during the election not to politicize a draft.

Obama is faced with economic war and what does he do? He says we wrote the bill because "we won", and allows it to be festooned with all sorts of crap that has no business being there, including millions for his political base.

He's making huge mistakes early on and its a shame.