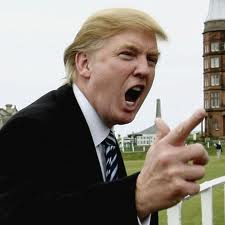 On April 15th I wrote: "But let's be very clear about one thing: Trump has absolutely no desire or intention of becoming president. His ego is too grandiose, and his appetite for money too rapacious, to forfeit the self-serving spoils of his capitalistic kingdom to serve the little people for a mere peon's wages while having to answer to anyone other than himself....So what Trump's campaign boils down to is a charade. It's a game he's playing, which is serving to feed that massive Id of his while affording him an even greater soapbox from which he can regurgitate his narrow-minded, inane bile."

With little fanfare and certainly to no surprise here, Trump on Monday officially announced that he will not be running for president. Here's a snippet from his press release:

"After considerable deliberation and reflection, I have decided not to pursue the office of the presidency," Trump said in a statement. "This decision does not come easily or without regret; especially when my potential candidacy continues to be validated by ranking at the top of the Republican contenders in polls across the country. ... Ultimately, however, business is my greatest passion and I am not ready to leave the private sector."

Apparently, even he's grown tired of the self-aggrandizing hoax through which he's flung enough ignorant, racist bile to fill 100 KKK meetings. But to be sure, Trump got what he wanted: he was able to have the spotlight shine on him for months as he flirted with a possible candidacy and was able to spew all sorts of mania-driven garbage. But in the process he caused serious, irreversible harm to his political standing and overall reputation. It was simply delicious to watch him squirm in anger and humiliation at the recent White House Correspondents dinner. God bless you Seth Meyers.

Trump, who has the dubious distinction of making Charlie Sheen seem calm, cool and collected, attempted to take President Obama down through a relentless, race-baiting "birther" and "schooler" campaign designed to delegitimize him and his presidency. Had it not been for the killing of Osama bin Laden, who knows how far Trump's reprehensible charade would have gone. Timing is everything, right? With Obama's approval ratings nearing 60%, and with the release of his birth certificate which served to embarrass and prove Trump wrong, it would seem that only the business world, and those who watch "The Apprentice," will have to put up with his massive ego going forward. Thankfully, he's been run out of Washington and the nightly news...
Posted by The Ostroy Report at 7:21 AM