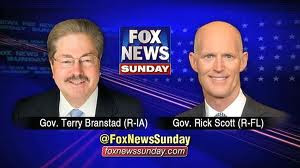 It's a comically contradictory message within the Republican Party that is justifiably confusing to independent voters. On the one hand there's the presidential candidate Mitt Romney and his running mate Paul Ryan attacking President Obama’s record as they insist Americans are not better off than they were four years ago. On the other, Republican governors across the country including John Kasich (OH), Chris Christie (NJ), Terry Branstad (IA), Rick Scott (FL) and Nikki Haley (SC) are downright giddy as the say the exact opposite, self-servingly touting their home states' economic turnarounds as they seek another term.

The impact is so potentially harmful to the GOP ticket that Team Romney has reportedly asked Kasich, Scott and others to tone down the positive statements. But Republican governors care about one thing: getting re-elected. As such, they’re forced to acknowledge what the Obama administration and Democrats have been saying about the national economy’s progress, even if their blatant self-promotion clashes with Romney’s gloom and doom narrative. So while his mutt may have been thrown onto the car roof, these governors are throwing Mitt under the bus. There can’t be such appreciable progress on the state level if the broader economy isn’t experiencing similar growth as well. And that’s good news for Obama, not their nominee.

At their convention this week, Democrats would be wise to hammer home two main talking points: that Americans are absolutely better off now than they were four years ago, and that the economic bragging by Republican governors across the nation is incontrovertible proof of that.
Posted by The Ostroy Report at 8:37 PM

Has anyone noticed that none of those governors mentioned in the post are actually running for another term in 2012?

The minute an elected official takes office they begin to run for re-election.

Rick Scott does not run until 2014...only been in office Two years.

Actually...all four of them were elected in 2010 and will not run again until 2014. Their comments of improved economies in their respective states have nothing to do with seeking re-election at this time.