Is the Scandal-Obsessed Republican Party Sounding It's Death Knell? 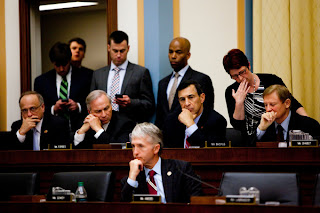 Imagine a Washington, D.C. where Republicans came to work each day fired up with renewed passion and zeal. A Congress where energized Republicans legislated in bi-partisan fashion on behalf of the American people. Imagine them joining with Democrats to enact meaningful health care, immigration, gun safety, education, environmental and economic measures. In short, imagine them actually doing the job voters sent them to do.

Instead, as it rabidly swirls in an intoxicating vortex of Obama administration scandals, the reinvigorated GOP's using all it's fervency and resources on a desperate effort to fully obstruct government, undermine President Obama and perhaps, in its fanatical extreme, impeach him as well. We have not seen the Republican Party this frothy and excited since Barney Frank retired.

The administration's been fighting accusations of government incompetence, overreach and even corruption as the president defends himself from myriad controversies that have unprecedentedly surfaced simultaneously in a perfect shitstorm. They include the Benghazi terror attack of September 11, 2012; the IRS's targeting of the Tea Party and other conservative tax-exempt organizations; and the seizure by the Justice Department of phone logs of Associated Press reporters. Throw in military sexual abuse cases; GOP filibustering of Obama cabinet appointees; and a pitch for cash to private insurers by Health and Human Services Secretary Kathleen Sebelius to promote ObamaCare...and the Oval Office has more so than ever become a terribly vexing place for the president.

To be sure, Republicans resemble greedy, spoiled-rotten kids in a candy store as they attempt to bring down Obama which, as Senate Majority Leader Mitch McConnell boasted three years ago, has been their number-one priority since '08...sparing no amount of time, expense or political cost to the country. There are more Congressional inquiries and investigations than at any time in recent history. There is zero focus on the business of governing, and 100% commitment to doing through partisan witch-hunting what these frustrated, angry losers couldn't do through elections: defeat Obama and Democrats.

It's a very calculated risk the party leadership is taking now, and one which could result in greater obsolescence and irrelevance if it backfires, which it likely will. Which is why House Speaker John Boehner and other key Republicans are reportedly cautioning the party's venomous members against overreaching in its self-serving probes. I suspect Boehner, who already has his eye on the humiliating 9% Republican Congressional approval rating, does not want his legacy to mirror that of late 90's Speaker Newt Gingrich, who was dealt a crushing political blow following the exhaustive, polarizing investigations and impeachment of Bill Clinton.
Posted by The Ostroy Report at 7:05 AM