The Republican Party is Dead 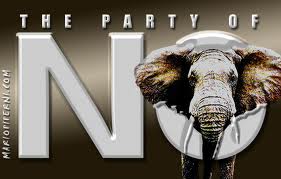 The United States has a two-term black president. Gay marriage bills are passing all over the country. A majority of voters support sweeping immigration legislation. Organized religion is facing more challenges than ever. And most Americans favor stiffer gun laws and a hands-off abortion policy. Yet the Republican Party appears more racist, sexist, homophobic, xenophobic and religiously fanatical than during the McCarthy era.

The GOP remains stuck in the '50's. They desperately cling to their over-romanticized version of "Mad Men" America, when rich white men ruled the day, when blacks knew their place, Hispanics were household servants, women were barefoot and pregnant, and gays were closeted. A time when it was ok to call a black man "boy," a gay man "fag" and a woman "sweetheart,"...accompanied, of course, by a harmless pinch or slap of the ass.

Despite the country's rapidly shifting demographics and social attitudes--a healthy move towards racial, religious and sexual tolerance--the GOP has boxed itself into a corner. There are patterns they simply cannot break. Ideals they can't divorce from. Rhetoric they can't  stop espousing. They just can't help themselves.

Evidenced by the results of the last couple of elections, the GOP, whose voice has been hijacked and whose platform has been dictated by its extreme right-wing Tea Party fringe, has become totally irrelevant. Yes, through fervent intransigence and obstructionism they've been a potent force for President Obama and Democrats to reckon with, and they've successfully thwarted his ability to carry out his agenda. As Senate Minority Leader proclaimed in 2010, "The single most important thing we want to achieve is for President Obama to be a one-term president."  But it's precisely this toxic partisanship and single-mindedness that's losing them elections and making them obsolete in the long-term. They may be winning some battles, but they're most definitely losing the war.

It's not difficult to imagine a few years from now a political landscape controlled by a Democratic dynasty, where the only Republicans left in office come from states and districts where the small minority of folks who voted for them share their ignorant, intolerant 1950's ideals. And when that day comes the party will have "visionaries" such as Ted Cruz, Marco Rubio, Joe Wilson, Sarah Palin and Todd Akin to thank.
Posted by The Ostroy Report at 7:59 AM