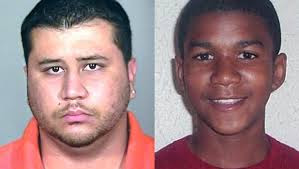 As Yogi Berra once famously said, "It's deja vu all over again." That's precisely the feeling I get about the trial of George Zimmerman, who prosecutors have charged with second-degree murder in the February 26, 2012 death of 17-year-old black youth Trayvon Martin. It's the Johnny Cochran Magic Glove Circus Part 2 and, I fear, with the same ultimate outcome.

There's a few key points that need stressing, as I believe they speak to the heart of this case and why it's painfully clear to anyone with half a brain in their heads that Zimmerman, like O.J. Simpson, appears to be a ruthless, unrepentant killer.

Critical fact #1: Zimmerman was an armed adult, in a car, who was instructed by a 911 dispatcher to stay put and not pursue Martin, an unarmed kid. In his own statement to police the night of the shooting Zimmerman wrote, “The dispatcher told me not to follow the suspect and that an officer was in route.” His attorneys can muddy the waters with all their 'if it don't fit you must acquit'-like bullshit, but this fact renders the claim of self-defense absurd.

Critical fact #2: The defense can have witness after witness testify that Zimmerman was on his back while a straddling Martin pummeled him. So what? Is that not a likely scenario for a kid who believes its his life that's in danger? That he has reason to believe he's going to die at the hands of a hot-headed Lone Ranger wannabe with a fucking gun? What difference does it make if Martin had him on the ground and was punching him? It's irrelevant unless you believe an armed Zimmerman had the unequivocal right to stalk an unarmed kid and then claim self-defense when the fearful kid defended himself against this nutbag with a gun. If so, then you believe Zimmerman gets to call all the shots: the pursuit, the confrontation, the shooting, the self-defense angle....while Martin gets to call nothing. That he's just a featured extra in Zimmerman's "Dirty Harry" movie.

Critical fact #3: Just because someone gets into a fight, is losing that fight, and even losing big, doesn't give him the legal justification to use deadly force to protect himself. Imagine a society where every fistfight ended in death just because one of the combatants had a gun and didn't like getting his ass whipped. Even if what his lawyers claim was true--that he was receiving a vicious beating from Martin--Zimmerman, the armed 29-year-old, didn't have the right to kill this unarmed teenager unless he had a reasonable fear that his own life was in danger.

And to that point, one key witness this week, Medical Examiner Valerie Rao, said she reviewed Zimmerman's medical records and photos taken of his injuries at the police station after the fight. "They were not life-threatening. They were very insignificant."

Which is why it's quite convenient that Zimmerman, whose defense team needs to demonstrate that he had a reasonable fear that he was going to die in order to justify deadly force, claims that Martin told him “You gonna die tonight mother fucker.” I guess the defense team's strategy is to exploit hearsay and scripted dialogue in order to demonstrate what the physical evidence cannot.

Posted by The Ostroy Report at 7:43 AM