Is There Any Hope For Egypt? 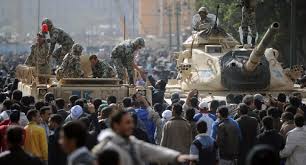 A little over a week ago Egypt's Army generals, claiming to be executing the will of the people, staged a military coup to overthrow Mohamed Morsi, the country's first Democratically-elected president. Since then, the country has spiraled downward into religious persecution and violence, tearing its fabric into two major factions--the Muslim Brotherhood, many of whose top Islamic leaders have been arrested and jailed, including Morsi, and the secular generals-- which seem headed for a full-scale civil war.

As a result, Egypt's nascent, fragile Democracy is in danger of disappearing and never returning. But what's most troubling is to see the level of support for the military, and the unbridled enthusiasm for its brutal actions this week and last, by tens of millions of Egypt's civilians...most of whom viewed the army as the enemy just one year ago prior to the revolution which ushered in the so-called "Arab Spring." Now they're jubilantly hopping in bed with these bombastic, disingenuous, power-hungry generals in such a naive and misguided manner. Troubling as well is the claim that last week's overthrow was not a military coup.

Let's be clear: the generals' decision to send tanks rolling through the streets as they deposed and arrested Morsi and his his top Muslim Brotherhood government leaders is, by definition and by all logic and reason, a military coup. Islamist media outlets have been shut down, the Constitution suspended, and Parliament dissolved.

Egyptians can call it whatever they like to fit their "Revolution 2.0" narrative, but right now Egypt's "Democracy" and "free elections" exist only until the military decides to change that. It's surprising--shocking actually--that many Egyptians are celebrating this coup rather than condemning it while fighting for Morsi's ouster through electoral means. A process where everyone gets to vote on the outcome, not just the dissenters.

Egyptians will have to decide whether they want to live in a true Democracy or amid military rule. Can't have both. This notion of "let's have free elections ...until we don't like the other side that won and then we'll stage a military coup and depose them and arrest all of their top leaders, shut their tv stations, shut Parliament and suspend the Constitution"is disingenuous, dangerous and certainly not in Egypt's best interest long-term. The country is going to be torn apart over this coup, and undoing everything Egyptians fought so hard for in the revolution of 2012. This is exactly the sort of oppressive autocratic rule the people rallied against. And now Egyptians are posing for photos with soldiers? The same military which has choked the country for sixty years? The military is not with the people. It is using the people. It cares only about holding onto its power.

Egypt must strive for a true Democracy, under the rule of law, where its citizens are truly free. A political system where leaders are elected and voted out when the people want change. Where votes, not intimidation, coercion and violence, are the agents of that change. Right now, as perplexing as it is, Egyptians have willingly turned their country back over to the near-fascist rule of brutal military generals who've turned Democracy and progress on its head and rolled the clock back to the Nassar days...

Posted by The Ostroy Report at 9:46 PM