Dr Mr. Putin: How Dare You? 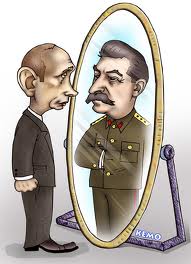 Dear Mr. Putin:
I read your NY Times op-ed Thursday. I have two questions for you: how dare you, and, what the hell were you thinking?

But I must admit, for about a nanosecond or two I thought, Damn, the guy's making a lot of sense here. As Elvis Costello wrote, 'What's so funny about peace, love and understanding'... right?

"We must stop using the language of force and return to the path of civilized diplomatic and political settlement," you wrote. You discussed the deterioration of U.S.-Russian relations, but noted "we were also allies once, and defeated the Nazis together."

But then just as quickly, the realities of the man behind the pen kicked into overdrive and I found myself literally saying out loud on a crowded subway train... Is he fucking kidding?! And then I realized that your piece was no joke, but rather a cool, calculated, duplicitous bit of political propaganda from an icy, manipulative, self-serving former KGB operative who smells a self-aggrandizing opportunity to advance his heretofore shitty standing on the world stage.

Jeez, Vlad, you head a country that places a higher value on ugly-ass '80's Bill Cosby sweaters than the rights of homosexuals. How dare you?

You think that Americans want or need a sermon from you on democracy, diplomacy, morality, faith, militarism and exceptionalism? You know what's truly exceptional? Your delusional, self-important rant and your belief that you have even a microscopic amount of credibility and respectability among the same U.S. citizens whom you hope and expect to impress and persuade with your disingenuous plea for civility and peace.

With your cold-war-era policies and matching steely personality, you support terrorists, you arm our enemies, you give asylum to our criminals and you consistently vote against us in the very United Nations you repeatedly cite as the arbiter of all things good and just. How dare you?

And speaking of the UN, that errant bastion of international law and diplomacy, which you hold in such high esteem, it has been an irrelevant, impotent, Jew-hating, terrorist-supporting embarrassment for decades. You write that "No one wants the United Nations to suffer the fate of the League of Nations, which collapsed because it lacked real leverage." Might I inform you that that moment of obsolescence arrived may years ago, and not just because of any lack of leverage per se, but more so over a woeful lack of credibility, civility, rationale and fairness. You and your friends in China, the Middle East and elsewhere have turned its General Assembly and Security Council into a disreputable, mystifyingly inept, ineffective circus.

"My working and personal relationship with President Obama is marked by growing trust," you incredulously claimed. Really? This statement alone is an outlandish affront to every American, and one which clearly demonstrates the alternate universe in which you apparently live.

So spare us the self-righteous, sanctimonious pontificating. It's been a long, long time since we joined hands, arms and values to fight the Nazis. Sadly, your country has driven off a political, diplomatic and moral cliff since then. We'll continue to do just fine without ya.

Regarding your shamefully exploitative attempt to selfishly soar to moral high-ground in America's newspaper of record, you don't believe a single word you wrote nor do we...
Posted by The Ostroy Report at 11:11 AM

Very, very, well said - finally something we can agree on - my entire maternal side of family, escaped Mother Russia and their constant violent anti Jewish progroms & holocausts, fleeing to religious freedom in America - we must never let his evil seep into this country....!!

is this satire, tongue-in-cheek, or are you actually serious here?

As far as the collective "we" goes, and what "we" believe, that's not for you to say, is it? "We" is a whole bunch of us, and we probably believe different things. Some of us would give Mr Putin the benefit of the doubt. Others, like the dinosaurs with emotional maturity of two year old's in the US Congress who still believe we're in the Cold War claim Mr Putin's speech made them want to vomit. Unless your post here was meant to be funny, you've just joined ranks with them.