An Open Letter to John Boehner 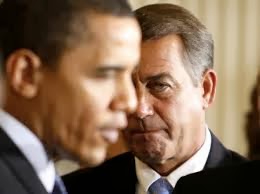 Before I rip into you I must first admit that I do feel a little sorry for you. On the cusp of a likely Tea Party-led government shutdown at midnight Monday, you appear as feeble as the helpless substitute teacher unable to control the rowdy, disruptive kids in the back off the class. Like that classroom, your House has been hijacked by the bad kids. And there's nothing you seem to be able to do about it.

And that's just the problem. You are Speaker of the f'ing House, for Pete's sake. You're supposed to be the strongest, most powerful, influential figure in that Chamber. Instead, you're as impotent as a neutered mutt in a dog run. I'm not sure what's worse: the reckless, irresponsible antics of your renegade Congressmen who are hellbent on destroying America's economy because of their hard-on to kill Obamacare, or your humiliating lack of juice in keeping them in check. Either way, I blame you.

You and your party apparently have forgotten what Democracy means. The Affordable Care Act, or more pejoratively branded Obamacare by the right-wing spin machine, has been legislated, adjudicated and signed into law by a sitting United States president. It's been signature law since March 2010, and was a referendum in several elections. In 2012 voters were given a clear choice between the incumbent president who created this law and the Republican challenger who largely ran on repealing it. And Americans spoke, sending Mitt Romney back to sulk in his thirteen homes. What part of this democratic process don't you and your party understand? You don't get to call "do-overs" by extorting the process and holding America's economy hostage. Quite frankly, it's unconscionable that your members are careening towards shutting down the government tonight, and worse, threatening to send the U.S. into default on October 17th in the debt ceiling stand-off. You all should be ashamed of yourselves.

What's also despicable, and hugely disingenuous, is the political rhetoric you guys are spewing. On the Sunday talks shows your talking heads accused Democrats of being the ones seeking a government shutdown, not you. You cited the revised "compromise" bill the House sent the Senate Saturday. Ya know, the laughable one where Obamacare wasn't defunded, but tabled for a year (and also stripped of the medical device tax which would be used to help pay for it). Predictably, Senate Majority Leader Harry Reid said screw off and we'll see ya Monday at 2pm.  You weasels cried foul: 'See?! We're the ones compromising, and Dems won't even talk to us!'

Your idea of "compromise" is a joke. Modifying a ludicrously unrealistic, impassable bill to make it slightly less ludicrous and impassable is not a "compromise." If I demand the deed to your house and then the next day said, "Ok, I will only live there 50% of the time," that doesn't make me a compromiser. It actually makes me just as ridiculous. If Reid didn't come back to the "negotiating" table it doesn't mean Democrats are disrespecting the process. It just means you and your "compromise" are a colossal insult to them and every American and Reid won't dignify it, or you, by showing up to such an outrageously offensive charade.

I'm incredulous that you guys think you could load up your "revised compromise" bill with, literally, your party's entire platform... which voters have already soundly rejected. I swear, I think I even saw a demand that Ted Nugent be inducted into the Rock and Roll Hall of Fame. Are you people insane?

Wait, there's more. You guys cited how "hard" you've been working all weekend while Obama played golf and Dems didn't even show up to work Sunday. "He talks to Iran and Putin, but won't talk to Republicans." Yeah, there's a very good reason for that, and it's quite disturbing: unbelievably, Iran and Putin have been acting more sane than you lunatics!

And then there's the outright lies. The ones like "People are going to lose their existing coverage." Again, shame on you. You know darn well that Obamacare only applies to those currently without health care. It doesn't apply to those currently insured unless they choose to seek cheaper options on the federal and state exchanges.

Or how about this lie: "Obamacare is the biggest job killer;" that American business are only hiring part-timers because they don't want to have to cover full-time employees. Seriously? Or is it that American corporations (who are earning record profits, by the way) aren't hiring because productivity levels are the highest they've been in ages following the massive layoffs from the recession. Why hire more people when you can get the job done with less?

And this one's my favorite, from Sen. Ted Cruz, the chief flame-thrower in the repeal movement and the man who gives you raging hemorrhoids: "The American people overwhelmingly reject Obamacare. They understand it's not working." Funny,  Obamacare doesn't start until tomorrow.

Ya know what, Mr. Speaker? I actually don't feel sorry for you anymore. That you've humiliatingly ceded control of your House to Cruz and his Tea Party henchmen makes you inept and not worthy of your leadership position. But there's still a few hours to change all that. The ball's in your court...
Posted by The Ostroy Report at 7:47 AM

This gang of overgrown, narcissistic hooligans are a disgrace to our country and to the American people. They're willing to deprive our military out of their pay but god forbid they should start by depriving themselves of their own pay and benefits. They are grifters.

Good blog. I suggest it's time for Boener to man up. Right now his legacy is the weakest, poorest, most feable speaker in the history of the house and continuing this course will only make it worse. If he abandoned the Hastert Rule and brought up a clean budget proposal that Dems would support he might get enough sensible Republicans to vote for it and pass it. Instantly his credibility and prestige would rise with all Americans, but the Tea Party. He would probably lose his job, but he should be greatful for that. Who wants to have his current legacy. Man up, sit back, take a back seat and relax. Your future is already a mess. Maybe you can salvage your dignity, if not your legacy.