Will Republicans Heed the Words of Pope Francis? 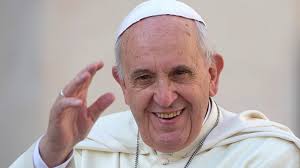 One thing's become abundantly clear with Pope Francis's visit to America this week:  God is most definitely not a Republican. As the human embodiment of God herself, Francis, in his historic address Thursday before a joint session of Congress, spoke plainly, passionately and with unfettered moral leadership on myriad hot-button issues with positions that contrast those of many staunch conservatives.

For decades Republicans have been hijacking God and religion, twisting and redefining the teachings of Jesus to fit their ideological dogma of intolerance, bigotry and exclusion. Remember, this is a party that threatens to shut down the U.S. government next week because of its rabid obsession with defunding Planned Parenthood and denying women a range of critical health and reproductive services.

But ever since he was elected in 2013, Francis has been vocally progressive and thought-provoking, often times arousing disappointment and ire among many conservatives who oppose what they consider his "liberal" statements and positions. And Thursday's speech in the nation's Capital was no different.

The Pontiff stepped squarely into Americans' difficult national dialogue on gay marriage, immigration, refugees, poverty, income inequality, "unbridled capitalism," capital punishment, gun violence and climate change. He spoke of "humility and devotion," and implored Christians and people of all faiths to help the poor, the sick, the hungry and the homeless. "Be kind to strangers," he said. And, "we know that Jesus wanted to show solidarity with every person."

It was touching to see politicians including House Speaker John Boehner shed tears listening to the Pope's sermon. But it's unlikely the Pontiff's stirring words will be taken to heart by the Speaker and his fellow narrow-minded conservatives, who for years have hid under the cloak of God in perpetrating a self-serving, elitist and decidedly unchristian-like extremist political agenda.

To be sure, Francis is the people's Pope. His warmth, compassion, energy, accessibility and somewhat populist views on at least a few controversial subjects have given him rock-star status among the masses. But the adulation for Francis doesn't come without a measure of residual disappointment in him and the Church on issues, for example, relating to women, homosexuality and birth control. That said, Francis indeed deserves major praise for taking the controversial steps to move the church and the Papacy into the 21st century. Rome wasn't built in a day.

"Let us remember the golden rule," the Pontiff told his Congressional audience. "Do unto others as you would have them do unto you."

That may be easier said than done in today's highly toxic, polarized, partisan landscape.
Posted by The Ostroy Report at 9:15 PM

In a word (OK, actually three), "Are you kidding!"