A Challenge to the Media in Reducing Mass Shootings 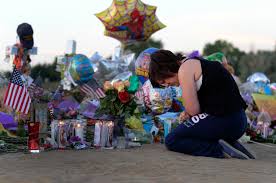 It's time to take some action in reducing mass murders in the United States, and it can simply start with the media. I challenge broadcast and cable news networks, local tv and radio stations, newspapers and magazines, and news websites to immediately agree to no longer make public the names and photos of these brutal killers.

In the wake of yet another deadly shooting Friday morning at a university in Arizona, the second mass shooting in a week, a news blackout could be implemented immediately. No gun lobby pushback, no political wrangling, no legislation required, just a simple act that everyone--I repeat, everyone--could easily and quickly get behind. We could begin to take action tomorrow.

A common theory among psychologists and academics is that a primary motivation of these mass murderers in shooting up a school, church, synagogue, movie theater, mall or workplace is simply to attain notoriety. That it's an opportunity for a loner or social outcast, someone who feels rejected and abandoned by society, to achieve in death what they could not in life. 'Now they'll remember who I am.'

Consider, for example, what the Oregon shooter, who killed nine people in a community college October 1, posted on a website August 31, expressing sympathy for the killer of two Virginia journalists on live TV in August:

"People like him have nothing left to live for, and the only thing left to do is lash out at a society that has abandoned them. His family described him as alone, no partner/lover. On an interesting note, I have noted that so many people like him are all alone and unknown, yet when they spill a little blood, the whole world knows who they are. A man who was known by no one is now known by everyone. His face splashed across every screen, his name across the lips of every person on the planet, all in the course of one day. Seems the more people you kill, the more you're in the limelight."

So it would seem that those in the media have the power to strip these deranged animals the one thing they often seek: attention and fame. I understand that there are journalistic principles here. That the media believes it has an obligation to report the news, no matter how graphic or horrific, including identifying the psychos who kill. But to them I say, get over yourselves. No one gives a shit about that but you. Americans don't care who shoots up a school. We don't need to see their soulless, demonic faces. You can still report the news. You can simply refer to them as "Killer A" or "Killer B." This sequential identity, like how we name hurricanes, would remind everyone how many mass shootings there are. Yet it would deprive these murderers the national glory they seek.

Perhaps if these killers knew that their heinous deeds would go 'un-celebrated,' that could possibly be the difference in preventing at least one of these tragedies. Is it not worth trying?
Posted by The Ostroy Report at 8:12 AM