An Open Letter to Jeb Bush 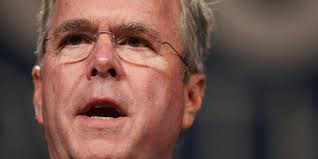 Let me establish for the record that I am a passionate, loyal, card-carrying Democrat. As such, you and I differ on virtually every political, economic and social issue imaginable. Furthermore, I consider your brother George one of the worst presidents in American history, and I can't fathom having another Bush in the White House. But ya know what? I desperately want you to win the Republican nomination.

It's not because I like you or think you're truly deserving of the job. It's because you are the only adult in a room full of buffoonish clowns. As un-moderate as I believe you to be, you're practically Barney Frank compared to the radical loons you're running against.

It's astounding, beyond inexplicable, that your party's front runners, with over 50% of voters' support, are Donald Trump and Dr. Ben Carson. These two embarrassingly empty suits have made your party, and America's political system, the butt of jokes all over the world. And that's precisely why you must win the nomination.

The Trump/Carson freak show--replete with Mexican rapists, bimbos and stabbings--might be deliciously entertaining to some at this point in the primary season, but this frightening spectacle must come to an end soon. We need you to restore legitimacy, credibility and respectability to our election process and to the presidency. You cannot allow Trump and Carson, or Ted Cruz, Marco Rubio or Carly Fiorina for that matter, to hijack our political system and cause it irreparable harm. You may be a staunch conservative, but you're not nuts.

So you have to start getting yourself out of the single-digits. You have to start appealing to voters. Put forth policies that resonate with the middle class. You have to become likable. You have to show some balls and demonstrate that you're not the weak, low-energy wimp that Trump has defined. And most important, you must take Trump on, head on. Aggressively. Like in a street fight. Look, you're a smart guy, and he's an ignorant, offensive fool. This should be easy (I have lots of ideas if you're interested). Polling at around 4%, you have absolutely nothing to lose. Your candidacy is on life support. If you don't step up quickly, you'll be gone before Christmas.

We live in the United States of America, for Pete's sake. The greatest nation in the world. We deserve better than Donald Trump, Ben Carson, Ted Cruz and the other GOP crazies. They are tarnishing everything we stand for as the land of freedom, tolerance and opportunity. The greatest act of patriotism you could ever commit is to win that damn nomination....
Posted by The Ostroy Report at 10:45 PM

Any repub candidate that is not a teabagging batshit crazy, will not be able to get through the primary process. Look what happened to Kasich who said Trump's deportation program was not workable. He has been attacked big time by the RWNJs. To get through the primaries you have to appeal to the crazies. I don't believe this to be true with the Dems. Although I have seen Hillary haters posting horrible comments as they support Bernie. It turns out these haters are really repubs who want Bernie to win the Dem nomination. They believe that Bernie can be beat by using the socialist/commie label. They fear running against Hillary. I am a Hillary supporter, but if Bernie gets the nomination, I will support him. The Hillary haters are not left leaners and do not want her to get the nomination.

When people ask me who I think the Republican candidate will be, I always say Jeb. I think, however, that is more of a wish than a reality. If anything, Andy, I'm even to the left of you! But I can't fathom that the party of Rockefeller and even GHWB would put forth some of the candidates that currently lead in the polls.

Jeb is as inspiring as a turnip.
He looks like a turnip and compared to Trump is about as smart as a turnip.

what a load of crap.. you want bush because he's a fricking moron just like his brother and hillary would eviscerate him!
You're scared of empty suits! However, you love the empty suit in the whitehouse now!