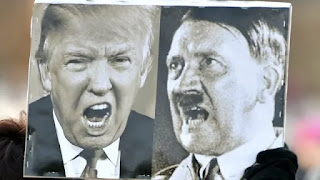 This comparison is not intended to be insensitive or disrespectful to, or trivializing, the Holocaust and the many millions whose lives were savagely extinguished at the merciless hands of Hitler and his brutal Nazi regime. Rather, it's to draw chilling foundational parallels between this genocidal behavior, the hateful propaganda that preceded it, and the kind of dangerous demagoguery that spews from Trump's mouth daily. We cannot be afraid to make such comparisons, because doing so gives the hate-mongers a free pass.

Since announcing his candidacy in June, Trump has dominated the polls, the media and the public's attention. Despite several outrageously offensive controversial statements about women, gays, Muslims, blacks, Mexicans, refugees, immigrants, Sen. John McCain, 9/11, his opponents and people with disabilities, Trump continues to defy conventional wisdom in maintaining a commanding lead.

Trump's blistering, irrational, ad hominem attacks on his detractors have drawn massive crowds at his rallies, have sucked the air out of the Republican primary season and have made it virtually impossible for any other candidate to gain meaningful traction. Prior to 2015, Trump's logic-defying gaffes surely would have killed a campaign. But in the current toxic political climate, his unprecedented missteps have incredulously served to fuel his reality-show bid for the presidency.

The real Trump phenomenon is that there simply doesn't seem to be anything he can do or say that will turn his rabidly loyally supporters against him. He's touched a raw nerve; pushed a very emotionally powerful button. He's given legitimacy to their ignorance and misguided vitriol. And that's where the similarities with Hitler become even more apparent.

Like Hitler, Trump has seized the opportunity to turn an "angry, fed up" segment of the population into his personal mob. They're rapaciously devouring his racially charged, divisive antics. The Trump mob has even resorted to physically attacking protesters who show up at his rallies, as they did recently in Alabama. Others have been pushed, threatened and intimidated. And if he passed out brown shirt uniforms, the kind Hitler's SS wore, many of these Trumpists would likely wear 'em as they fight "to take back America."

These angry citizens, like those in pre-World War II Germany, are looking for a scapegoat. Someone to blame for their frustration. Their poverty. For threatening their security. For destroying "America's greatness." In Nazi Germany it was fear, ignorance and seething underlying ethnic animus that gave rise to Hitler. The same ugly witches' brew that Trump is masterfully manipulating and exploiting as he stokes the flames of prejudice and hatred.

Listen to Trump's fiery attacks and lies about Mexicans, Muslims and refugees and it's not such a leap to Hitler's manic rantings about Jews. And what should we make of his rabble-rousing about walls, registries and the rounding up and deportation of millions of immigrants? While he's not talking of internment or concentration camps per se, he is without question dipping his toes in those ugly waters. This is a man who proudly endorses "Operation Wetback," the unconscionable immigration law enforcement initiative in 1954, which was not only inhumane but deadly.

At his rallies, Trump gesticulates wildly and manically mocks and ridicules anyone who's dared to cross him.  Listen to the cadence and rhythms of his speech. The sarcastic, disparaging tones. The high-pitch ranting. The intense levels of incitement. The narcissism. And yes, the scapegoating, the most chilling element of all. Then watch clips of Hitler's speeches. They're not terribly dissimilar.

Perhaps even more disturbing than Trump himself are the reactions from his "fans" seated behind him, whose nodding, approving, laughing faces you clearly see no matter how outrageously insulting and un-American his comments. The more outlandish and hateful his rhetoric, the more engaged and excited they appear.

Imagine that 2015 America was not enjoying a robust economic recovery, with appreciable growth in jobs, GDP, stocks and housing prices; flowing credit; low inflation; and low interest rates. Imagine instead that in was the Fall of 2008, when the nation's economy was on the verge of collapse. When financial institutions were failing, and savings were being pulled out of banks and stuffed under mattresses. When panic and fear ruled the day.

Now image Donald Trump coming along during this period with his toxic, polarizing, xenophobic, isolationist rhetoric pitting citizen against citizen, "real Americans" against immigrants, Christians against Muslims, whites against blacks and Hispanics. Imagine for a second how easily these "fans" could be provoked into widespread violence and persecution of certain minorities they seem to despise. You think 1930's Germany is so different?

Posted by The Ostroy Report at 8:11 AM