Another Open Letter to Jeb Bush 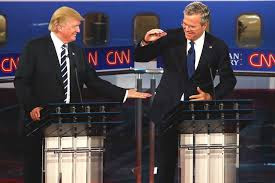 Tuesday night could be the biggest night of your political career. The fifth Republican debate, live from Las Vegas, will likely be the moment you either reignite your comatose presidential campaign or you fade into the sunset. So if you truly wish to maintain the Bush family's dynastic hold on the White House, I have some advice for you. It's going to sound aggressive, especially for a mild-mannered softy like you, but if I were you I'd take my anemic 5% and roll the dice. You have nothing to lose, and everything to gain:

Go after Trump. Hard. Like your life depended on it (which, politically, it does). Attack him right out of the box. Birthers, Mexican rapists, Muslims...make him own his reprehensible  comments. Challenge the American public to reject his incendiary racist rhetoric. At some point early on you need to ask Americans if they believe that intolerance, hatred and fear is their idea of "America's greatness," because that's what Trump's America looks like.

You must tell them that they are better than that. That these are not the principles on which America was built, nor are they what we stand for today. Remind them that there's no need to to be "great again" because we are already great. The greatest nation in the world, in fact. The land of opportunity. Where people of all faiths and cultures are welcomed, especially if they're escaping religious and ethnic persecution. A nation governed by the rule of law, not by the divisive, scapegoating demagoguery of flame-throwing, self-aggrandizing fear-mongers like Trump.

You must pointedly declare that Trump's America is not a great America. It's an ugly America. An America filled with ignorance, anger and vitriol, where entire faiths are mocked, condemned and banned. Where walls are built, both on U.S. soil and on the world stage, and humiliating registries are created. Where immigrants are rounded up, ripped from their families, and deported.

You must then tell voters why you are the right choice to make America even greater. How you will fight for them and protect their interests while upholding the Constitution. While respecting our fellow citizens and helping those in need around the globe. That we just need to look within our own families to know we're a nation of immigrants. And that keeping America safe and secure from terrorists does not require us to abandon our principles.

You must ask voters if they want an America which is lead by someone who resorts to juvenile ad hominem attacks on opponents. Who disparages women and the way they look. Who threatens to "bomb the shit out of" sovereign nations. Whose inflammatory remarks makes him a walking recruitment video for ISIS and other terrorist organizations. Who's alienating us from every single ally, including Israel, who just this week told him to take a hike.

Oh, and, please, no hand slappin' or high fivin' Trump for Pete's sake. Look at him like you detest him, which we all know you do. Don't show even an ounce of respect or reverence. I know it's hard, but try to look and sound like a tough guy. Someone with balls. Someone who can not only stand up to Trump, but to our enemies.

And here's your line of the night. In a strong voice, look into the camera and say to voters: "He's bankrupted marriages, he's bankrupted companies and his divisive, bigoted rhetoric is going to bankrupt America."

And then watch your poll numbers rise...
Posted by The Ostroy Report at 10:06 PM

I was a junior in high school the day of the JFK assassination. I remember the fear and confusion of the following weeks. I enlisted in the USMC in 1967 but I took part in anti war protests in the early seventies. Nixon and Watergate came next which further eroded trust in government and elevated the fear level. The Iran crisis, the ABSCAM scandal, Chappaquidick, Ronald Reagan, the Alzheimer patient who was an amiable fool at best,GW Bush and his totally misguided war in Iraq and the many other disgraceful chapters in our modern history.
Now comes Donald Trump and he is without a doubt the most vile, disgusting, slimy cretin to yet come forward in our shameful history.
The division, the racism, the hatred which he mindlessly kindles is the worst thing I've seen yet. May he soon fade from the scene and trouble us no more!

I'd almost vote for a guy who did that. Almost. Here's the thing: Jeb doesn't want the job. He never did. I think he's longing for that final nail so he can go back to shoveling money into that cold, dark place wehre most of us have souls.