What If This Is Actually What Donald Trump's Campaign Is All About? 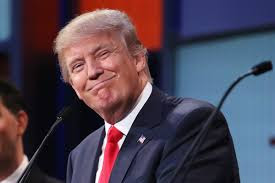 Thanks to Donald Trump, the 2016 presidential campaign is like no other in the history of American politics. It's certain to be studied in colleges and universities, and analyzed by consultants and pundits, for decades to come.

The old rules, as well as conventional wisdom, have been tossed aside for a whole new fascinatingly despicable play book. Now all a candidate needs to do to become the front runner of a major political party is be angry, insulting, confrontational and totally lacking substance. To hell with being "politically correct;" just fire up blue collar white folks with ignorant racist, sexist, xenophobic, homophobic rhetoric.

Which brings us back to Trump, the man who put the "ad" in ad hominem attacks. The buffoonish bully blowhard who's turned the Republican Party on its head in the biggest feeding frenzy in the history of Ids. But what if instead of being an unprecedentedly mean-spirited political campaign it was actually a pioneering, praiseworthy research project that would turn Trump from goat to hero overnight?

How genius would it be if Trump were to announce, just as he started to drop in the Iowa and New Hampshire polls, that his campaign was in fact not a legitimate quest for the presidency, but rather to conduct the world's greatest social experiment? That is was a brilliantly crafted scheme designed to expose the bigotry, ignorance and ugliness that's prevalent in American culture. A test.

Trump would explain that in his "experiment" he set out to prove that he could do or say anything, no matter how outrageous or offensive, without consequence... because it would tap the raging anger and bigotry in so many Americans. That in his attempt to appeal to the lowest common denominator, he'd push the envelope so far until it would draw these bigots out into the open like scattering cockroaches. That the more inflammatory and racist his rhetoric, the more people would like him. And that just when he'd say something so irresponsible and reprehensible that it should finally kill his campaign, it actually would propel it even further.

Trump's initial plan would be to offend Mexicans, immigrants and refugees. He'd call them terrorists and rapists, and threaten to build walls to keep them out. If that didn't turn voters off he'd move on to gays and women. Then he'd attack war heroes and people with disabilities. He'd call his detractors "stupid, "losers" and "bimbos"... and insinuate that female reporters were treating him badly because they were 'menstruating.' He'd lie about 9/11. And when, despite all that, he'd incredulously find himself pulling ahead by 20+ points, he'd call for an all out ban on Muslims.

And this phenomenon would continue unabated. The more despicable Trump's words and actions, the more popular he'd become. Until one day, in typical Trump megalomaniacal grandiosity, he'd step before the cameras for the big reveal:

"I'm leaving the race. I don't want to be president. I never wanted to be president. I just wanted to hold a mirror up to the ignorance and bigotry that lurks dangerously beneath the surface. And you shocked me. The more vile and racist I became, the more you loved me! No matter what I did, I'd go up in the polls! I'd say to Melania, what do I have to do turn these people against me, kill someone?! I pulled off the greatest social experiment in American history. In the end, it wasn't Donald Trump whose behavior was shameful, it was yours. I was merely pretending, but you weren't. You've got a lot to work on, America. And you can thank Trump for exposing it."

Talk about redemption. The last laugh would surely be Trump's...
Posted by The Ostroy Report at 9:29 PM

Andy: This piece is so perfect it reads like a Rod Serling screenplay for the Twilight Zone! Bravo sir....bravo!