What Broadway Can Teach Hollywood About Diversity 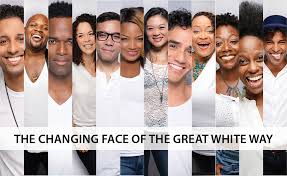 Hollywood has a problem. It's largely run by rich straight white men who, for the most part, champion the work of other straight white men. According to well publicized statistics, if you're a black, Hispanic, female or LBGT actor of director you've not been invited to the party. Getting jobs, good jobs, Oscar potential jobs, is nearly impossible.

In the last twenty years there have been twelve black Oscar winners. Only five have been in the acting category. There were two directors, one for documentary feature and one for documentary short subject. Four winners were in the music and writing categories, and there was one producer.  In the last ten years, just ten black actors received Oscar nominations, while two black directors were nominated (in the feature category). Shockingly, not one black actor has been nominated in the past two years, spawning the #oscarssowhite social media backlash and calls for a boycott of the 2016 Academy Awards ceremony.

In the Best Picture category, in the last ten years, just five films with a mostly black cast and/or central theme have been nominated. Overall, the stats for Hispanics are pretty dismal as well.

Contrast that with Broadway in just the last year alone and you get a starkly different picture, one that screams of diversity and inclusion. One of the four best plays was written and performed exclusively by black women. Two of the five Best Musical nominees were black productions, as was one of the four nominated best musical revivals. And all four musical acting awards went to to black actors. The overall nominees list was quite diverse as well; seven other individual nominees were actors of color, as were two directors in the Best Play and Musical categories.

Women fared well as well across many categories, most notably in a production like WAITRESS, with its ground-breaking all-female creative team (full disclosure: my late wife Adrienne Shelly, who was killed in 2006, wrote and directed the film on which this musical is based).

The obvious question is, how can the two communities be such polar opposites when it comes to diversity? The answer isn't clear. But what is clear is there's a desperate need for the power brokers in Hollywood to own up to the fact that there's a shameful dearth of black, Hispanic, female and LBGT talent in front of and behind the klieg lights. And that needs to change.

“Think of tonight as the Oscars, but with diversity," host James Corden said in his opening monologue. "It is so diverse that Donald Trump has threatened to build a wall around this theatre.”

When it comes to race and inclusion, it's not a good sign when your industry is compared with Donald Trump, even in jest.
Posted by The Ostroy Report at 7:13 AM