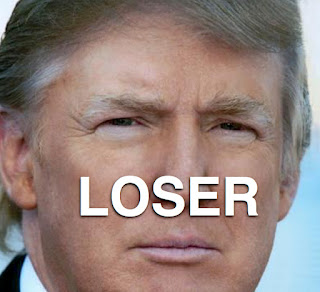 It's hard to fathom it's been only two weeks since Donald Trump took the oath of office. During this infancy period he's threatened trade wars; angered several allies; botched a Yemen raid which killed a navy Seal; suggested a moral equivalency regarding murder between Russia's Vladimir Putin and the U.S; threatened our free and open press; disparaged the judiciary; demeaned the intelligence community; politicized the military; circumvented his cabinet; saw major leaks from staff; deregulated Wall Street; empowered corporate polluters; created a Constitutional crisis over his Muslim ban; and has taken lying to new extremes with "alternative facts."

But as unsettling as the above may be, the real loser by 2020 (more likely well before), will be Trump himself. I'm not worried about America. We are the most determined, resilient, resourceful nation on Earth which operates under the rule of law and a time-tested system of checks and balances. We've survived and continue to thrive despite revolution, civil war, slavery, World Wars, The Great Depression, Pearl Harbor, McCarthyism, Vietnam, assassinations, Watergate, 9/11 and more. The Framers knew what they were doing. We'll be just fine.

Trump, on the other hand, will, if he hasn't already, rue the day he slithered down that escalator and descended into his worst nightmare. The person who will suffer the most from Trump's presidency is Trump himself. By the time he leaves office--be it involuntarily through impeachment or from serving out his term--he will be ruined. He will exit Washington a national disgrace with a very 'bigly' damaged legacy. Here's where he'll be hurt the most:

1. His voters/supporters: Trump conned his angry white working class base once, but they'll eventually abandon him when they realize just how much they were duped. That their factories and coal mines never returned; the minimum wage was never raised; Obamacare was never repealed; their Social Security and Medicare benefits were reduced; the Mexican-paid border wall was never built; and his Muslim ban was a sham. More so if the economy turns negative and/or there's a terrorist attack, both of which would counter the narrative of Trump-as-exceptional-businessman-and-great-protector.

2. His business/brand: The ubiquitous Trump brand is found on a variety of products and real estate, from suits and ties to apartment buildings, hotels and resorts. Trump makes most of his money from licensing. But at some point his sexist, racist, divisive behavior, and his eventual ranking as the worst, most unpopular president in history, will tarnish that brand beyond recognition and it'll be worthless. He's already experienced terminated entertainment contracts, cancelled real estate deals and the removal of his name from the facades of NYC buildings.

3. His family: During inauguration week, First Lady Melania Trump appeared visibly miserable,  as if she could foresee the familial dysfunction that lie ahead but was powerless to stop it. This wouldn't be the first time she's been bullied into unpleasant, uncomfortable situations in order to feed her husband's pathologically rapacious hunger for attention and validation. Her life, and their marriage, or whatever little may be left of it, will never be the same. And while Trump's adult kids might currently be drunk on daddy's newfound power, and thus their own elevated status, they will soon discover that riding torn, tainted coattails won't have a happy ending. Witness that Neiman Marcus and Nordstrom have just dropped Ivanka's products. This is surely just the beginning.

4. His Manhattan social standing: Trump is said to have few close friends, and his stint in DC will ultimately render him persona non grata in his hometown.  He'll be ostracized. An outcast. Like kryptonite. No one will want to be seen in public with him. I doubt even Rudy Giuliani will take his calls.

5. His obsession with celebrities: nothing turns Trump on more than celebrity, whether it's hanging out with them or being one. But ever since he first began his unconscionable birther campaign to delegitimize Barack Obama six years ago, he's become a pariah in the creative community. These days he couldn't get himself arrested in Hollywood if he whipped out his micro-dick and spanked that lil' monkey in the middle of Rodeo Drive. He's lucky if he gets to party with Scott Baio and American Idol contestants. As for his own 'fame,' by the time he leaves office he won't even be D-list enough to be a contestant on "Celebrity Apprentice."

For Donald Trump, running for president was supposed to be fun. A huge ego boost. Free publicity for his brand and business. Actually getting elected was never the plan. As a result, he's on a blinding supersonic path to self-destruction via the most gargantuan ego trip known to man.
Posted by The Ostroy Report at 7:46 AM

Andy you are spot on, with just the very thing I have been telling friends and foes. Trump thought this was his best chance to be “Mr. Big Shot” and boy did he ever play it up. From the get-go of him coming down the escalator all smiles and back about 10 feet was his non-smiling wife. He had to be first and could not even have his wife be next to him.

He thought this was going to be really fun, flying his TRUMP plane to all of these airports and having cheering crowds of sheep consume every lying word he spilled out of his big mouth. He would promise them the world with a fence around it. Jobs for everyone. Trust him and not crooked Hillary. He ate this all up, he couldn’t get enough of all this love and name recognition he was getting. He had the equally gullible media falling all over him. MSNBC wasted hours of camera time watching an empty podium waiting for the Orange god to show up.

Trump was on a roll, every word was telecast and no matter how stupid he sounded there was always an excuse to cover his ignorance. I still believe all Trump wanted was to show the world what a wonderful guy he was but mainly after it was all said and done he wanted a TV network. He had his Republican money bags ready to start it all up. To compete with FOX, CNN and MSNBC. He would show them all up. He would then be so popular with his own network that he could say whatever he wanted and his died-in-the-wool followers would love him even more.

All he had to do was continue to say stupid, outlandish statements and for sure these people wouldn’t actually fall for it but he was having fun. The problem was he really didn’t want to win this election. His talk of the election being “rigged” wasn’t deterring his flock from still loving him. He was really in a pickle, he couldn’t actually win this thing, could he? So along comes the Billy Bush tape, hell that surely will would do him in. I would not doubt if he actually had it leaked. Nothing was working for him to lose, not even lying and calling others names.

Now he is elected and no one was more surprised than him. His face when he first was in the White House said it all, “What the fuck do I do now?” His wife, who looks like she might just be his sex slave, lives in NY. When they are together, she has a hard time mustering up a smile. She is very unhappy, and it shows bigly. I give 45 to the end of this year, if even that long before he just resigns for some bull shit excuse. You and I Andy will sit back and say to our fellow Trump backers, “We told you so.”