What Would Jesus Think About Trump? 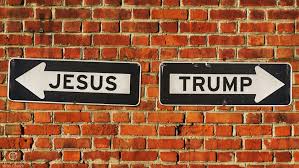 The past couple of weeks of Donald Trump's nascent presidency have been a bit trying to say the least. His "Make America Great Again" promise sure looks like it's having the opposite effect. Our great nation is becoming unrecognizable. Lies are the new facts. Fantasy the new reality. Our democracy is threatened by fascism. And those of 'faith' seem frighteningly comfortable accepting, under the cloak of God, the most abhorrent, abusive, discriminatory behavior.

I hope evangelicals, who shockingly abandoned their core beliefs to support a sexist, racist, pussy-grabbing serial sinner, feel righteous in their cold hearts as Trump attacks the Pope, mocks the disabled, abuses the powerless and rejects the persecuted. Is that what Jesus would do? Tell me again which chapter described how he felt about the meek? Oh wait, it's the meek shall inherit the Earth, right? Or is it the meek shall be banned because we like simplistic, racist solutions to extremely complex issues that we don't begin to understand because we don't believe in briefings, facts or intelligence? It all seems so confusing right now. Maybe Trump, who's so well-versed in all things Biblical, can clear that one up for us.

Lady Liberty, a pretty awesome chick who for 131 years has been a storm-weathered symbol of freedom in America and a beacon of hope for immigrants, shares with us the following inscription at her feet: "Give me your tired, your poor, your huddled masses yearning to breathe free, the wretched refuse of your teeming shore. Send these, the homeless, tempest-tossed to me, I lift my lamp beside the golden door!" But that's not what's happening in Trump's xenophobic reign of terror. Perhaps it's time to drape Ms. Liberty in a burka for a few weeks as a reminder to conservatives of what she stands for.

How is it that those who profess to be the most devout and godly can sit idly by as an ugly nationalist movement sweeps across America driven by an engine fueled by sexual, gender, religious, ethnic, racial and cultural discrimination? What would Jesus think about that? You remember Jesus, right? The poor, tolerant, compassionate liberal who rejected greed, violence, the glorification of power, the amassing of wealth without social balance, and the personal judging of others, their lifestyles and beliefs? It's the exact opposite of what we're seeing from Trump and Steve Bannon. From Republicans. And from evangelicals. Hypocrisy reigns supreme in the most sinful administration in presidential history.

I suspect Jesus would be shedding tears over the judgement, intolerance and hatred that's ripping apart society and shattering our faith in humanity. Over the flouting of his teachings:

Love your neighbor as yourself.

So in everything, do to others as you would have them do to you.

If you would be perfect, go, sell what you possess and give to the poor, and you will have treasure in heaven.

But when you give a feast, invite the poor, the maimed, the lame, the blind, and you will be blessed, because they cannot repay you. You will be repaid at the resurrection of the just.

Do not judge, lest you too be judged. For in the same way you judge others, you will be judged and with the measure you use, it will be measured to you.

Just a few reminders of what Jesus would do...

Posted by The Ostroy Report at 8:31 AM