Making the Case for 2020 Hillary Clinton 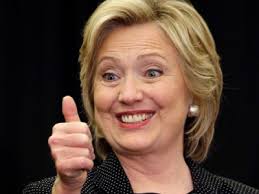 Ok, before I go any further, let me state unequivocally for the record that I believe Hillary Clinton ran one of the worst campaigns in modern political history. Her management was inept; her messaging misguided; and her character terribly flawed. Let’s put this into proper perspective: she lost to Donald Trump, for fuck’s sake! A colossal joke of a candidate who by all accounts should’ve lost to a chair. As the saying goes, the election was Clinton’s to lose...and she lost it. So why on Earth would I want her to run again in 2020?

The answer is rather simple: I remain committed to the belief that Clinton would be an incredible president. And I believe she not only will run again, as her recent and outspoken re-launch onto the public stage indicates, but that she will also win. No, I’m not crazy. I just believe that history repeats itself. And for that we simply need to look to Richard Nixon.

It was 1960. The first televised presidential debate. Nixon refused make-up. John F. Kennedy, well, he was JFK. The battle pitted the young, charismatic Democratic upstart with the movie-star looks against the nervous, sweaty, 5 o’clock-shadowed, beady-eyed, prematurely-aged Republican. The rest is history. As is Nixon’s startling comeback eight years later to win not one but two presidential elections. Times change. Situations change. People change. Can Hillary? My money’s on yes.

Clinton is perhaps the most qualified candidate in history. A prestigious legal career, eight years as First Lady, another eight as U.S. Senator from New York and four years as Secretary of State. A die-hard progressive who voted 93% of the time with Sen. Bernie Sanders when both served together. And, she’s a woman...and it’s fucking time America is led by a woman.

The key to the 2020 election is that Trump will no longer be a political outsider who can lie through his teeth 24/7. No more outlandish positions and pie-in-the-sky promises. That con-game can only work once. Next time he’ll be running on his record, not Clinton’s or Barack Obama’s, or his own bloviating, self-aggrandizing uber-hype.

Voters will judge him on whether he delivered or not. Did they get their wall, and did Mexico pay for it? Did he fix immigration and “extreme vetting?” Did he “rid the world of Isis” as he’s already declared he’s doing? Did he prevent terror attacks on U.S. soil? Did he keep China, North Korea, Russia and Syria in check? Did he and Boy Wonder Jared Kushner achieve Israeli/Arab peace? Did he favorably renegotiate, or terminate, NAFTA? Did he get our NATO allies to “pay their fair share?” Did he bring back the factory and coal jobs? Did he give the poor and middle class their big tax cuts? Did he give them better and cheaper healthcare? Did the economy grow 3%+ annually? Did he reduce the debt and deficit? Did he create as many if not more jobs as Obama? Did he ‘drain the swamp’ or fill his cabinet with it? Did all the tough talk and bluster translate to action and results? In short, did he make their America ‘great again?’

To be sure, Trump’s biggest asset during the campaign was his masterful manipulation of his base through an endless barrage of big promises, lies and political rope-a-dope. But now these same qualities are his biggest liability. As Aaron Burr reminds Hamilton in the Broadway musical, “Winning was easy, governing’s harder.” It’s a lot more fun to promise the world as a candidate than to defend against having accomplished nothing after four years as president.

Plus, a weakened Trump will more than likely be primaried by a slew of retreads like Jeb Bush, Marco Rubio, Scott Walker and John Kasich, as well as new challengers such as Nikki Haley, Paul Ryan, Sen. Ben Sasse (NE) or even another outsider billionaire like Marc Cuban. All of whom would do much of Clinton’s bidding for her.

But if Trump succeeds in fulfilling his campaign promises and, more so, improves the lives of his voters, then he would likely win again. But his MAGA crowd—the sleeping beast who he roused off the couch and motivated, often with sexist, racist rhetoric, to vote for him—won’t have the same drive, passion and commitment for him if they end up disappointed and feeling conned. Some of them, like Kraig Moss, who I wrote about earlier in the week, have already jumped ship. Many millions more could follow. It could get very, very ugly for the man who, according to a new CNN/ORC Poll, already has the lowest approval rating (44%) in modern presidential history.

Let’s keep in mind that Clinton won the popular vote by 3-million. Nothing to sneeze at, and certainly a strong foundation from which to build even further support these next three years, especially if Trump continues to struggle. And it’s not like Trump gave her a Reagan-like trouncing with his electoral college total either. While he loves to brag at how “massive” his win was, he snagged the presidency with just 306 electoral votes, among the lowest in modern history. Factor in FBI Director James Comey’s unprecedented last-minute politically-based clusterfuck, and Russia’s hack and overall influence in the election, and it’s not hard to understand how the Democrats’ heretofore rock-solid “blue wall” (Pa, MI, Wi, Mn) was lost by the thinnest of margins, giving Trump a squeaker of a victory.

If Clinton runs the first thing she’ll need to do is assemble a kick-ass team. No more Robby Mook, with his millennial naivete and obsession with useless data, or Huma Abedin, who’s saddled with Anthony Weiner’s humiliating legacy.

Clinton needs to do whatever’s humanly possible, including begging, to get Bill’s old band back together: Paul Begala, James Carville and George Stephanopoulos. And throw in Obama’s brain, David Axelrod, for good measure. She also needs a few truly sharp, aggressive young strategic soldiers, such as Bakari Sellers for example, to assist with media and messaging. She also needs a War Room, like the one Bill had, to deftly and swiftly address each attack...and there’ll be plenty of them again.

The next thing Clinton will need to do is study Trump like she’s never done before. Every tick. Every tell. Every position. His speeches, his rhythms, his overall appeal. She must painstakingly study what he did to connect so powerfully with the “Trump Democrats,” a constituency that should rightfully be hers.

Lastly, she must look within. She must do an honest and forensic review of her many gaffes and flaws. She needs to successfully address the perceptions and criticisms that she’s entitled, disconnected, unlikable and shrill. She needs to relate. Needs to win over more women. And, for God’s sake, more men. And Southerners. And those in the Heartland. They all used to vote Democrat, and they can do so again. Like the man said...it’s the economy, stupid. Still is.
Posted by The Ostroy Report at 7:34 AM

Yes, the campaign was inept, terrible, COMPLETELY, but even with the fake news spewing out of Enquirer/FOX and Comey, almost forgot pinko commie Putin puppets LIES out of Russia, garnering the 40% voters of deplorable suckers whose vote is not based on principles, applied to their own lives NOT BASED ON ANY PRINCIPLES OR SET OF VALUES IE 10 COMMANDMENTS, and therefore, the easy prey for con-artist candidates like Trump, despite the unprincipled, misogynist suckers, DESPITE THE LIES, FALSE WITNESS, SLANDER, FALSE ALLEGATIONS AND SMEAR CAMPAIGNS OF THE REPUGLICANS WHO HAVE NO PRINCIPLES,

It's not the economy stupid - it's the misogyny stupid - get it straight.

Are you not aware of the poll, conducted a year before the election, - nationwide polling of millenial women between the voting ages of 18 and 25?

When asked if they had a gender preference for the office of President, 75% of those WOMEN, regardless who the woman candidate would be, emphatically stated they not only preferred a man as President but they DID NOT want to have a woman for a US President!!!!!

It's another subliminal social disease we, as a country have contracted, like racism and homophobia, all other second-class citizen heirarchy/ pecking order of discrimination and prejudice.

It's the misogyny stupid!
Trump beat out all 16 of the Republican candidates as well, FOR F-KS SAKE!


PS Here is the part where you are right:

"The answer is rather simple: I remain committed to the belief that Clinton would be an incredible president. And I believe she not only will run again, as her recent and outspoken re-launch onto the public stage indicates, but that she will also win."

I am a white 63 year old male, firstly. Let me just add that I too, remain comitted and fiercly, recalcitrantly loyal to voting for Hillary again, as I did in 2008 and in 2016. I will write in Hillary's name for President in the next election whether she is running or not. I'm pissed. My fair and equal vote, once again, was stolen in an unfair election. sidenote: Abolish the obsolete Archaic Electoral College.

Yepper, that's right. I don't care if it causes the ruination of our Democracy, divides the DNC and gives the election to the Republicans again, I have already made up my mind.

I'm writing in Hillary and I hope every Hillary voter remains true and steadfast to electing THE MOST QUALIFIED CANDIDATE ON THE F-ING PLANET!

As a block, Hillary voters can show awesome power and stubbornly force the rest of the country, by fair and equal vote, and popular MAJORITY RULE, yes finally, by democracy, change the office of President from a position for the Privileged, to one of Statesperson, experience, skill and - finally, Democracy!

No more cowboy with a monkey movie stars, no more state bankrupting "Senator's son", No more gameshow Host - YOU'RE FIRED! Experienced, Selfmade career politicians who have made contributions to making our country better need only apply, so no Republicans by default. - NAME ONE CONSERVATIVE ACHIEVEMENT THE GOP HAS ACCOMPLISHED IN THE LAST 60 YEARS??!! NAME ONE!