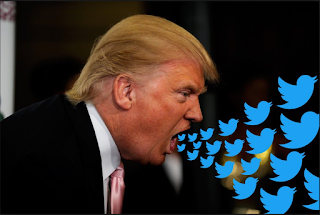 We all know how much Donald Trump loves to Tweet. It empowers him and provides a safe platform to be the "street-fighting counter-puncher" to opponents and enemies ranging from Hillary Clinton to Kim Jong Un. He's so addicted to Twitter that it's impossible to imagine him without it, no matter his ultimate fate.

"My impeachment hearing was the HIGHEST RATED in history! So much better than Clinton's! And I would've beaten Johnson too if we had TV back in the '20's!"

"Spoke with Paul Ryan today. He's still in shock over losing to Bryce last year. Eric Cantor's been helping him. He had a shocking loss too. THAT'S WHAT FRIENDS ARE FOR!!"

"I WON'T be visiting Devin, Mike, Paul, Rick, George, Hope, Jeff, Carter or Jared. Will never forget how they turned on me. Besides...Trump HATES prison!"

"I love being back in NY. I can tell everybody really LOVES me! They're all just pretending to hate me and ignore me because it's, like, "coolfveve" to hate Trump. WHATEVER!"

"Since Melania left, I've had more pussy than a cat shelter! Talk about MAGA!"

"Eric was just promoted to MANAGER at the Trump Tower Starbucks! (I pulled some strings...he never would've gotten it on his own). SO PROUD!"

"Hoping that maybe this is the month I'll get to see Barron. I've heard he's maybe, kinda, like, not so angry anymore. He knows Trump loves him!"