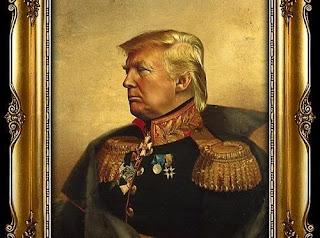 Never in United States history has there been a politician who has mocked, denigrated, disrespected and exploited the military as much as Donald Trump.

Trump's latest transparent stunt came Tuesday with the news that he's directed the Pentagon to plan a Bastille Day-inspired grand military parade down Pennsylvania Avenue. Like France's iconic warrior Napoleon Bonaparte, Trump's all but crowned himself emperor and sees himself as the great national valiant hero. So what's more fitting than a bit of Napoleonic pomp and circumstance?

And why not, right? Trump, the self-proclaimed "counter-puncher," is proudly touted
as a "street-fighter" by his aides and surrogates. You attack him and he hits you back 100 times harder. He's a ruthless bully on Twitter. Armed with an iPhone, his tiny fingers and 280 characters, Trump wages cyber-warfare with Beethoven-like mastery at the keys. At his rallies, where his bombast and braggadocio run amok, he yells in that loud, gravely "get him outta here!" intimidating tone. Apparently, someone told him that if he pretends to sound tough he is tough.

The only problem is that Trump is anything but tough. Anything but a warrior. Anything but a hero. He's a coward. A draft-dodging coward. Unlike Napoleon, who bled on the battlefield, when it was Trump's time to serve his country during Vietnam he hid behind his rich daddy's coattails and imaginary 'bone-spurs' and received five student and medical deferments.

And while 58,000 of his countrymen had died in Vietnam, Trump, in a 1997 interview with Howard Stern, arrogantly bragged that his years of sleeping around, when he faced the danger of sexually transmitted diseases, was his "personal Vietnam."

"I feel like a great and very brave soldier," he impudently boasted to Stern.

But the closest Trump ever came to actually wearing a uniform was as a teenager when he was sent by his father Fred to the New York Military Academy....the kind of strict military boarding school where exasperated parents often send unruly asshole kids to 'become men.' (Fred, if he were alive, should demand his money back plus interest).

And now Trump wants a parade. With weapons, missiles and tanks rolling past the White House while Dear Leader stands like Kim Jong Un basking in the manufactured glow of self-created adulation as everyone salutes him.

But the official White House explanation for the parade is more altruistic:

“President Trump is incredibly supportive of America’s great service members who risk their lives every day to keep our country safe," said press secretary Sarah Huckabee Sanders. “He has asked the Department of Defense to explore a celebration at which all Americans can show their appreciation.”

Nice try, Sarah, but the duplicity of your statement is staggering. Let's revisit some of the many ways Trump has shown his 'respect' and "support" for the military and its "great service members":

*"I know more than the generals"
*Attacked John McCain: He's "not a war hero... He was a war hero because he was captured. I like people who weren't captured"
*Attacked Gold Star families
*Lied to veterans about a $5-million donation
*"The military is a disaster"
*Took a veteran's Purple Heart at a rally: “I always wanted to get the Purple Heart. This was much easier”

But wait there's more, and it's even worse...

Trump is under independent investigation for allegedly colluding with Russia to hack and influence the 2016 election and then wage a merciless campaign to demean and discredit the special prosecutor, the FBI and Department of Justice. He's also attacked the free press as "the enemy of the people." He's called Democrats "treasonous" and "un-American" because they didn't applaud him during his State of the Union speech. And he's repeatedly demonstrated a general disdain for the Constitution and the rule of law.

What could be more unconscionably disrespectful to our brave soldiers than to attack the bedrocks of democracy...the laws and freedoms...that they died defending?

You can almost hear them shouting from the grave with clench fists...'spare us your fucking parade.'

So make no mistake: the parade charade is not a celebration of our military but rather a pathetic attempt by the Narcissist-in-Chief to celebrate himself and, more so, to once again use the military as pawns in his War of Distraction from the RussiaGate investigation. An investigation that each day moves closer to the Oval Office door and could ultimately bring and end to Trump's reign of terror.

Before that humiliating end occurs, perhaps Trump, like his idol Napoleon, will abdicate his throne and be exiled to the island of Manhattan...
Posted by The Ostroy Report at 11:54 AM