Why Trump Gets Away with Everything 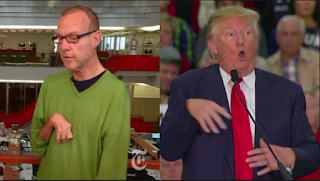 It's been terribly frustrating for Democrats, moderate Republicans and independents alike who bristle at Donald Trump's stunningly durable teflon coating. How the president appears to dodge seemingly undodgeable career-killing bullet after bullet. How his unprecedentedly offensive, abnormal behavior would've destroyed any other politician in history. So how the hell does he get away with it all?

Simple. Donald Trump is a bully. A perpetually frightened, paranoid, insecure, thin-skinned, self-loathing narcissist coward who exploits his financial and political power to verbally beat others into submission. His secret? He's created a climate of fear among Congress, the media, Democrats and members of his own party terrified of becoming the target of his wrath. His swift and brutal missives, mainly over Twitter, petrify those who would love to fight him but are woefully mismatched (**cough Marco Rubio cough**).

Trump has no filter. No boundaries. No shame. No fear. And that scares the shit out of people. He's menacingly erratic and unpredictable. So people cower. Afraid to speak up. Or speak out. Because he's great at not playing fair. Because they're afraid of public excoriation and humiliation. Because they fear having their most vulnerable qualities shamelessly mocked (their height, weight, looks, disabilities). Because they know they'll lose. And he can smell this fear, and he exploits it to the max.

Which is why Paul Ryan and Mitch McConnell largely avoid anything resembling serious pushback, righteous indignation or ethical/moral condemnation. If they went head-to-head with Trump in any truly meaningful, courageous way they and other key Republicans know they'd likely wake up to a horrifyingly inappropriate tweet which attacks their reputation, career, faith, family and/or sexuality. And it wouldn't matter if the salvos were untrue.

Which is why Democrats refuse to get in the ring with Trump. They fear the disparaging branding. Just ask Crooked Hillary, Crazy Bernie, Little Adam Schiff, Pocahontas Warren, Sneaky Diane Feinstein, Al Frankenstein, Crying Chuck or Wacky Congresswoman Wilson. And they remember how Trump made Little Marco appear really little and embarrassingly ineffectual. They know Trump's a way better streetfighter, and that you never show up to a gunfight with a cuticle scissor. And they know that once Trump brands you, you'll never lose that pejorative distinction.

Which is also why evangelicals shockingly still support the most scandalous, sinful leader since Caligula.  Especially when logic and reason dictate they'd be much happier with a true religious fanatic like Mike Pence, not a preacher in pimp's clothing like Trump. Would Pence not be protecting their 'religious freedom' to discriminate against gays? Would Pence not have given them a right-wing Supreme Court nominee like Neil Gorsuch? Wouldn't Pence represent their pious interests more than the pussy-grabbing sexual predator who attacks the Pope when he's not bangin' porn stars and strippers? But, they're afraid. Afraid of the decimating Tweets. Which might include a cringe-worthy accusation of cavorting with hookers or underage boys.

Which is why many in the media are also afraid of Trump. Just ask Crazy Jim Acosta, Sleepy Eyes Chuck Todd, Dumb as a Rock Mika, Psycho Joe and Crazy Megyn. Why else would they subject themselves to his daily insults, lies and efforts to silence them? Why wouldn't they hit back hard, even if it meant getting tossed from the briefings? Why do they play by Trump's rules? Since they have absolutely nothing to lose from those daily lie-fests, how about walking out of them? Or not showing up at all? Wouldn't that send a powerful message that they won't tolerate a brazen, craven assault on our Constitutional right of a free and open press? Desperate measures for desperate times, right? Fat chance.

Bullies can immobilize an entire group of people even if they hugely outnumber him. Bullies paralyze people with fear. It explains why 50 people on a subway car will stare at the floor when a lunatic boards and acts in a threatening manner rather than band together to kick him off at the next stop. It's why 50 people can listen to a bully mercilessly berate someone and not come to his or her defense. And it's why hundreds of politicians would rather allow Trump to turn America into a shithole instead of collectively taking action to get rid of the madman they all deep down believe is the worst, most dangerous president in history.