Dear Donald Trump: How Do I Loathe Thee? Let Me Count the Ways... 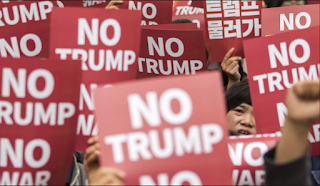 Dear Mr. President (or should I say, Dear Mr. I-Lost-the-Popular-Vote-By-3mm-and-Needed-Putin-to-Steal-the-Electoral-College-For-Me):

I never liked you. Not even back in the 80's and 90's when most people kinda sorta liked you. When you were "fun" Trump.
Liberal Trump. Brash New Yorker Trump. The kind of egotistical big-city blowhard that people, for some reason, admire and were attracted to. Which explains why you were given a tv show which became wildly popular.

But now you're president. And not just president, but the worst president in the history of presidents. And also the least popular. To be frank, you're an abomination. You and your presidency are more chaotic than Jeb Bush could've ever imagined. Than any of us could've imagined. It's that bad.

An overwhelming majority of Americans still cannot believe that the greatest nation in the world is led (and I use that term incredibly loosely) by an ignorant, inept, unqualified, dispassionate, insecure, petulant, undisciplined, impulsive, flattery-starved morally-bankrupt manbaby who has the conviction of a toddler and the vision of a bat.

The world cringes in horror that the Unites States has a president who summarily alienates its allies and embolden its enemies. Who poses a grave, existential threat to American democracy and national security. Who many believe is a traitor. A Manchurian President who promised to "drain the swamp" but instead turned it into a branded cesspool.

I loathe you, Trump. For you attack every single human trait I ascribe to: decency, kindness, compassion, empathy, humility, generosity, resolve, intellectual curiosity, self-confidence, self-awareness, self-respect, courage, morality, civility, integrity, fidelity, humor. You are cruel and heartless. A selfish, self-consumed, self-aggrandizing, self-serving coward in bully's clothing who has stained the Oval Office more than if Barack Obama's dog Bo ran in and shit all over it.

There are so many reasons why I loathe you. So many that I cannot possibly remember them all. But I will do my best to list as many of them as possible (in no special order):

*You've attacked Obama's citizenship
*You're a serial philanderer
*You cheated on your newlywed wife and had unprotected sex with porn stars and Playmates
*You're a pathological liar
*You're a climate change denier
*You're against universal healthcare
*You're a cyber-bully
*You've attacked Gold Star families & war heroes
*You've attacked the Pope
*You've mocked a disabled person
*You attacked London's and San Juan's mayors during catastrophic events
*You've disrespected our intelligence community, independent judiciary, military and rule of law
*You attack the media as "the enemy of the people"
*You attack your opponents/critics with juvenile nicknames
*You refuse to show your tax returns (which would likely prove your crookedness)
*Your conflicts of interest are staggering
*Your 50%+ staff turnover makes my head spin
*You've put your mind-numbingly unqualified daughter and son-in-law in top White House positions
*You play golf more than you work
*You can't string two coherent sentences together*You're a sexist
*You're an admitted sexual abuser
*You've grabbed pussies "because you can"
*You endorsed a child molester who longs for the days of slavery
*You're a racist
*You hate Muslims
*You've embraced white nationalists, the KKK and "very fine" Nazi's
*You mistreat immigrants
*You want me to pay for your disgusting wall because you lied about Mexico paying for it
*You're terrified of the NRA
*You suck up to brutal dictators like Kim Jong Un, Xi, Dutarte, Erdogan and el-Sisi
*You're in bed with Putin
*You stole the election
*You are an inherently evil person

One thing's certain: by the time your reign of terror is over and you are just a sad, broken footnote in American history, this list will be 10 times as long...