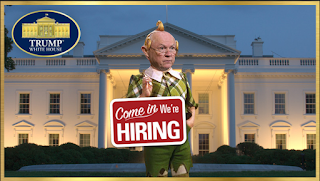 The most accomplished administration in presidential history (especially one that's done more in just one year than any other president) seeks bright, articulate aides offering varied opinions and perspectives that will most likely fall on deaf ears. No political experience necessary (in fact, the more unqualified you look on paper the better).

Applicants must be willing to be subjugated by a petty, belittling, mean-spirited, abusive boss and be stripped of their self-worth, dignity and pride (did we mention the merciless bullying yet?). Ideal candidates will be highly insecure with low self-esteem and and even lower expectations. Loyalty is a must. Irrational, blind, self-destructive loyalty.

If hired, you will work for a truly unique president. A self-styled "counter-puncher." A, like, smart man (a stable genius, actually) who knows words; has the best words. Who knows more than the generals. A master negotiator and deal-maker. An astute businessman who never met a bankruptcy he didn't like. Someone who brings opponents to their knees with a simple degrading nickname. Someone with strong vision but who's not afraid to change his mind every 10 seconds if presented with a compelling argument by the last person he talks to. A billionaire not beholden to special interests (unless you include corporate lobbyists, evangelicals, the Koch brothers, the NRA and...does Vladimir Putin count?). The "I alone" president who doesn't need anyone (especially you).

As great as this opportunity sounds, it does come with risk: candidates will almost assuredly be subjected to (mostly on Twitter) public ridicule, mocking, humiliation, condemnation and cringe-worthy personal attacks relating to their most vulnerable qualities including height, weight, looks, hair, speech, family, sexuality, career. You'll be brutally pitted against other aides like gladiators in the Roman Colosseum (the boss loves "conflict"). And you'll likely be publicly contradicted and undermined and made to look like an absolute ineffectual fool who's constantly asked by friends and family "why the hell are you staying there!??"

Even if hired, your spirit will be broken almost immediately and you'll likely "resign" within 3-9 months. When you run a successful ship like ours it's normal to have an historically high 43% turnover rate. Constant churn and burn. Keeps the staff fresh. On their toes. Uncertain. And paranoid. Paranoia's good. We want you afraid. Looking over your shoulder. Backstabbing. Leaking. Becoming unnamed White House sources for authors and journalists (the boss also loves chaos!) (ps...do we even need to mention the merciless bullying at this point?).

Full disclosure: working for the Trump administration will likely destroy your career, your reputation and your soul...and you may eventually face indictment and imprisonment. You'll likely be left a shattered shell of a human being. Your spouse might leave you and your kids may hate you. You'll become a sad, tragic footnote in history. And the butt of Jimmy Kimmel jokes.

So are you ready to take this awesome leap!? Are you man or woman enough? Or are you just a pathetic low-life loser? Don't pass on this opportunity of a lifetime!