The Lesson of Conor Lamb 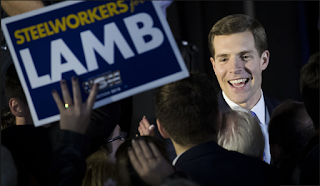 To listen to Donald Trump, Paul Ryan and countless Republican surrogates, Conor Lamb, who stunned the GOP with his surprise win Tuesday in Pennsylvania's 18th Congressional District, is a Republican. Apparently denial isn't just a river in Egypt.

And speaking at a private fundraiser in Missouri Wednesday night, Trump broke his unusual silence about the special election which has sent the Republican Party into a tailspin:

“The young man last night that ran, he said, ‘Oh, I’m like Trump. Second Amendment, everything. I love the tax cuts, everything.’ He ran on that basis. He ran on a campaign that said very nice things about me. I said, ‘Is he a Republican? He sounds like a Republican to me.’”

The problem for the president and his party is that this "Republican" also just happens to support Obamacare, unions, Social Security and Medicare, medical marijuana, expanded background checks and a woman's right to choose... and who opposes Trump's tax cuts and wants to dethrone Nancy Pelosi. Sounds like a real right-wing MAGA!-hat-wearing ideologue, huh?

One of three explanations exist for the president's eye-popping spin: he actually believes what he's saying.  Believes that everything is just fine heading into the November midterms; that his 'popularity' will carry the party to eventual victory; and that what happened in PA is an aberration.

Or that he thinks he can actually change the narrative, and therefore the momentum, just by saying whatever incoherent, disingenuous drivel pops into his head because he's the great and powerful Trump.

Or perhaps he's utterly panicked and humiliated and simply throwing a face-saving hail-Mary to his brainwashed base in a desperate attempt to hang onto the one loyal group who he can go to for love when it appears everyone else can't stand him.

To be sure, what Conor Lamb is most definitely not is the stereotypical tree-huggin', Suburu-drivin', bleeding-heart liberal who's been the GOP's punching bag for decades. Republicans know how to define and defeat those candidates. But they don't know what to do with newcomers like Lamb, who just might finally be redefining the party and what it means to be a 'Democrat' in the age of Trump.

What happened Tuesday in PA 18 was no fluke. The seat has been controlled by Republicans since 2003. Mitt Romney won the district by 17 points in 2012. Trump carried it by 20 points. Not only should Lamb have lost, but he should've been trounced. If Republicans can't win in a district Trump won by 20 points, on the heels of steel tariffs in steel country, their prospects for victory in other red districts (where either Hillary Clinton won or Trump carried by 10 points or less) is, as Larry David would say, pretty pretty bleak.

Lamb won because he doesn't fit the traditional mold. A former Marine and prosecutor, he's a law and order patriot and man of faith who supports gun rights and therefore rightfully scares the shit out of the GOP.

But can the party of zealous progressives like Bernie Sanders and Elizabeth Warren adapt to also be home to moderates and centrists like Lamb? Will the party recruit and support candidates, especially those is traditionally red districts and states, who can win back the Democrats Ronald Reagan stole 37 years ago and who Bill Clinton attracted a decade later?

The lesson from Lamb's momentous victory is that not only can Republicans be defeated and defeated big, but defeated on their own turf with the help of disaffected Trump voters. That 'buyers-remorse' is setting in and can be critically exploited.

And that this election, like those before it in Alabama, Virginia, Kansas, North Carolina, Washington and Georgia, was without question a major referendum on Trump. A blatant repudiation of the dysfunction, chaos and lies that afflicts his administration. An incontrovertible rejection of his sexism and racism that's poisoned America. Of the sullying of the office by the most unqualified, unfit, unpresidential president in history.

The biggest question is, given this incredibly fertile midterm-election ground, will Democrats successfully change the game-plan and surf that massive blue wave we keep hearing is coming or, as in the past, will they deftly snatch defeat from the jaws of victory?
Posted by The Ostroy Report at 11:17 AM